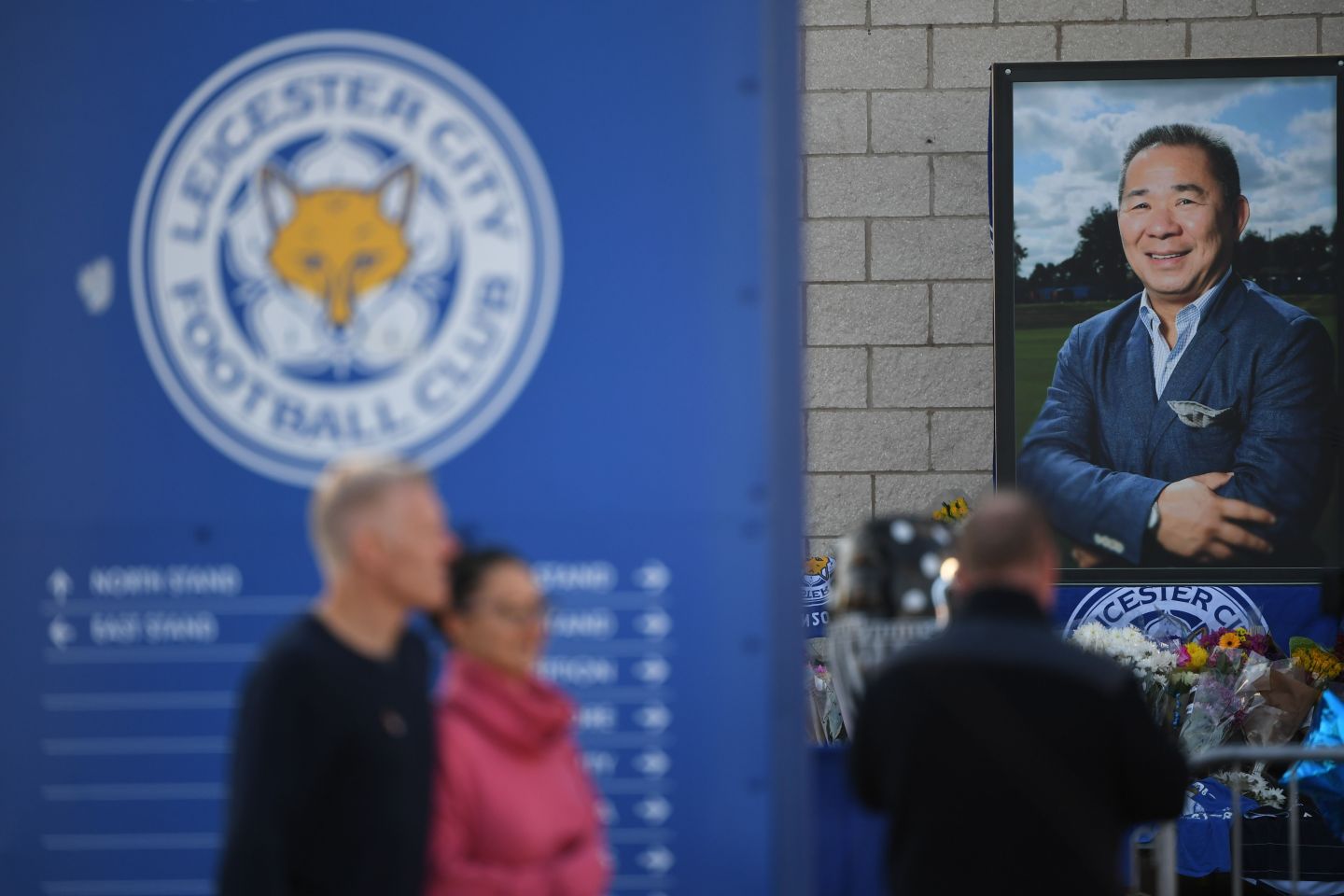 People pause at a portrait of Leicester City Football Club's Thai chairman Vichai Srivaddhanaprabha, who died in a helicopter crash at the club's stadium, amid flowers and tributes outside the King Power Stadium in Leicester, eastern England, on October 29, 2018. - Leicester City's chairman Vichai Srivaddhanaprabha was among five people killed when his helicopter crashed and burst into flames in the Premier League side's stadium car park moments after taking off from the pitch, the club said on October 28. A stream of fans already fearing the worst had laid out flowers, football scarves and Buddhist prayers outside the club's King Power stadium after Saturday's accident in tribute to the Thai billionaire boss -- the man they credit for an against-all-odds Premier League victory in 2016 (Photo by Paul Ellis—AFP/Getty Images)
Paul Ellis—AFP/Getty Images

While the Srivaddhanaprabhas are famous for their turnaround of Leicester City, culminating in one of the greatest sports upsets when the club became English champions, the family’s fortune is derived mostly from its duty-free giant back home, King Power Group.

Vichai, King Power’s chairman, amassed a net worth of $3.3 billion at the helm of the firm, the Bloomberg Billionaires Index shows. The country’s record tourism boom drew huge numbers of passengers to the key Thai airports where King Power is the monopoly provider of duty-free stores under concessions from Airports of Thailand Pcl.

The crash happened about 45 minutes after he’d been watching his team play West Ham in the English Premier League on Saturday. The chopper faltered shortly after takeoff and slammed into a parking lot, bursting into flames. Vichai was one of five people killed in the crash, Leicester City said in a statement.

“Leicester City was a family under his leadership,” the club said as it postpones soccer matches scheduled this week.

His sudden death comes as state-run Airports of Thailand prepares a tender to award the next concession for the sprawling duty-free stores at Suvarnabhumi, Thailand’s main international airport in the capital Bangkok. The current concession is due to expire in 2020, and foreign players such as South Korea’s Lotte Corp. have shown interest in the business. Reports indicate domestic firms The Mall Group, Central Group and Bangkok Airways Pcl are among those that may compete for it too.

King Power is the largest duty-free retailer in Thailand. The family also has a minority stake in Thai AirAsia, a unit of Asia’s biggest discount carrier, AirAsia Group Bhd., according to a company statement released in December 2017.

The family name Srivaddhanaprabha was bestowed upon them by Thailand’s late King Bhumibol Adulyadej and loosely translates as light of progressive glory. That came after the monarch gave the rare honor of a royal warrant to Vichai, according to the ceremony in which Vichai received an honorary degree from the University of Leicester.

Vichai’s Son Aiyawatt Srivaddhanaprabha is chief executive officer of King Power and vice chairman of Leicester City. Filings show that Aiyawatt has the biggest individual shareholding after Vichai in the AirAsia unit.

Most of the family’s King Power shares are held through Thailand-based V&A Holdings, according to a filing retrieved in June 2016 from Orbis, a database of company information published by Bureau van Dijk.

Vichai was at the head of a consortium called Asian Football Investments that purchased Leicester City Football Club in 2010. Under his ownership, Leicester won promotion to the English Premier League in 2014. The club was crowned champion against overwhelming odds two years later.

“I came to the football industry with Leicester City because of my love for football and the club and its fans have already repaid me several times over with their passion and loyalty,” Vichai said upon receiving the honorary degree in 2016.

The family built a rapport with fans by offering freebies such as beer and donuts for Vichai’s birthday. His son Aiyawatt, known as “Top,” took to the victory stage in a televised ceremony after the 2016 upset.

“Hello champions,” he said to a cheering crowd. “I think we need a bigger stadium, huh?”

The underdog story started in Thailand, where Vichai founded King Power in 1989 and won a license to set up the country’s first downtown duty-free shop at a mall in Bangkok.

The company’s big break came when it was awarded exclusive rights to run duty-free and tax-free concessions at Thailand’s key airports. The firm also secured the right to manage all other commercial space at Suvarnabhumi airport, which opened in 2006, according to the company website.

In the first nine months of 2018, almost 80 million passengers came through Suvarnabhumi and the capital’s second airport, Don Mueang, another King Power concession. While tourism growth has sputtered recently, the sector remains a key engine of Southeast Asia’s second-largest economy.

In April, Vichai and his family acquired assets from the Mahanakhon real-estate project in Bangkok for about $423 million, which includes a skyscraper billed as the city’s tallest.

Vichai navigated Thailand’s complex political environment of elections followed by coups, while defending against challenges as he expanded King Power. Most recently, a Thai court dismissed a case alleging the Thai government hadn’t received all the fees due from the operation of duty-free concessions.