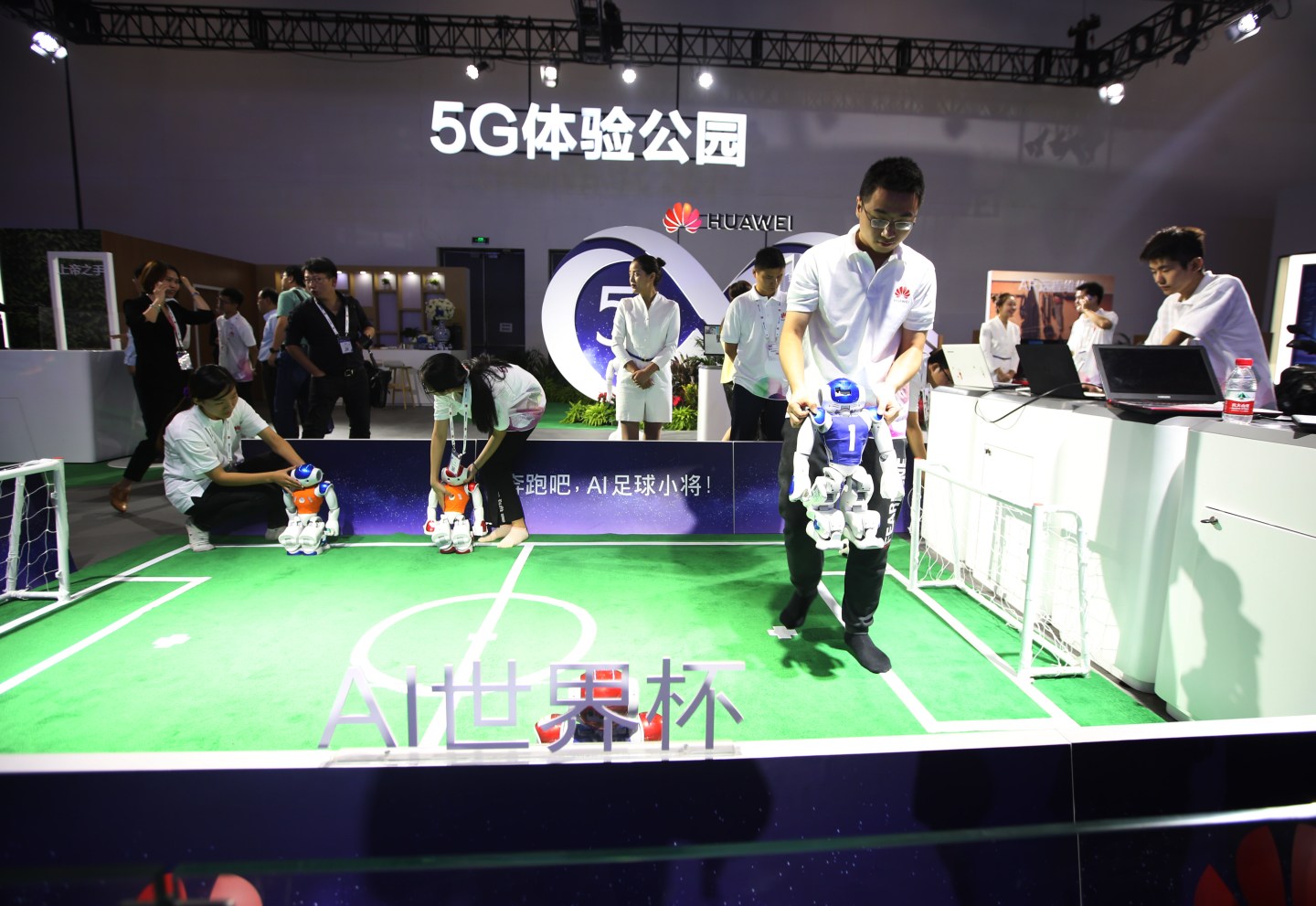 China, the world’s largest mobile market by subscriber and network size, is determined to become the world leader in 5G wireless technologies, posing a new competitive challenge to Western telecommunications firms and raising national security concerns for Western governments. So says The South China Morning Post this week in one of a flurry of recent accounts detailing the escalating global arms race in next-generation mobile networks.

“If ‘big data’ is the new oil of the digital era,” the Post observes, “then 5G is the next set of pipes that will deliver it—and unlike previous generations, China is determined to own more of this infrastructure, giving it mastery of its own industrial future.”

The stakes are high. 5G networks are expected to be about 100 times faster than current wireless networks. They promise movie downloads in the blink of an eye and an explosion of new mobile services. Champions of the new networks say they will support a riot of connected devices, and unleash unimaginable breakthroughs.

Some experts think China is winning the 5G race. Beijing identified 5G as a national priority in its “Made in China 2025” technology roadmap and worked closely to set global technical standards. The government supports efforts of its mobile carriers and equipment manufacturers to develop 5G technologies. Huawei Technologies, China’s largest telecom equipment maker, is investing billions in 5G research and owns a critical patent for “polar coding,” a breakthrough method for correcting errors in data transmission invented by Turkish scientist Erdal Arikan. A recent Deloitte study found that, since 2015, China has built 350,000 cell sites compared with fewer than 30,000 in the US. China is expected to roll out 5G for commercial use in 2020.

The U.S. has left development of 5G to the private sector. AT&T and Verizon are rushing to introduce 5G in some U.S. cities by the end of this year, but mobile devices compatible with the those new networks won’t be available until 2019.

The Trump administration has focused on 5G networks in its wider dispute with China over technology and trade. Washington has barred China’s two largest telecommunications equipment makers, Huawei and ZTE, from competing in the U.S. market, citing national security concerns, and sought to deter strategic allies including Australia, New Zealand, Canada, and the United Kingdom from accepting 5G services from Chinese telecommunications equipment companies.

All told, the battle for dominance in high-speed wireless offers yet another example of how competition between the planet’s two largest economies is cleaving the world into two (or possibly three) rival techno-blocs.

Streaky shooter. Fortune just released its annual list of companies best positioned for growth in the future. The stock prices of 2017's Future 50 companies gained 35% over the past year, nearly triple the return of the S&P 500 over the same period. At the top of the 2018 list? HR and business cloud software provider Workday, which you can read more about in Adam's profile.

Tough D. Amid all its turmoil and controversies, Facebook needed a top flight replacement for outgoing head of lobbying and communications Elliot Schrage. So it's probably no surprise that the company just hired former Deputy Prime Minister of the United Kingdom Nick Clegg to take the role.

Pick and pop. In investing world, PayPal reported third quarter revenue and profit ahead of analysts expectations and its stock jumped 7% in premarket trading on Friday. Revenue rose 14% to $3.7 billion and adjusted earnings per share gained 28% to 58 cents. Shares of video game maker Activision Blizzard lost 8% on Thursday, but it wasn't even an earnings day. The company said sales of its new game Call of Duty: Black Ops 4 exceeded $500 million in its first three days on sale. That matched sales of last year's release, but was far less than Wall Street expected.

Three pointer. The death of Paul Allen leaves a huge estate, valued at $26 billion, to be divvied up in support of the Microsoft co-founder's favorite causes. In 2010, Allen joined the Giving Pledge started by his buddy Bill Gates and Warren Buffett, so at least half the money should go to charity. Unmarried and without children, Allen's holdings include the Seattle Seahawks football team and the Portland Trail Blazers basketball team as well as vast real estate and a well-regarded art collection.

The Great Rikers Island Art Heist (Esquire)
For forty years, an original Salvador Dalí painting went unnoticed inside New York City’s massive jail complex. Then a gang of thieves decided it might be worth something.

Sears’s ‘Radical’ Past: How Mail-Order Catalogues Subverted the Racial Hierarchy of Jim Crow (Washington Post)
A lesser-known aspect of Sears’s 125-year history, however, is how the company revolutionized rural black Southerners’ shopping patterns in the late 19th century, subverting racial hierarchies by allowing them to make purchases by mail or over the phone and avoid the blatant racism that they faced at small country stores.

There are only 73 days left this year for Amazon to announce the location of its second headquarters city in North America. I'm still betting on the Washington, D.C. and Northern Virginia area. But a team of Wall Street Journal reporters has been scouring the hinterlands looking for clues of where HQ2 might end up. Amazon execs have made multiple visits to some cities while others, like Raleigh, North Carolina, haven't heard much in ages. The paper says the most recent visits have been at ground level:

Publicly, the process was quiet over the summer, with Amazon officials crunching data before executives in charge of the search decided to take another look at a few cities, according to the people. Some cities that didn’t receive a second visit are still in the running for the project. The Chicago Tribune previously reported that Amazon visited Chicago for a second time.

In the recent visits, Amazon executives spent much of their time exploring neighborhoods around, or nearby, sites that have been proposed for HQ2, said the people. Executives appear to be more interested in an urban site that is already woven into the fabric of the city and less interested in having its own campus outside a city center, said the people. One reason would be shorter commutes. It could also help with recruiting employees, something that has proven true with its urban, downtown Seattle campus which is peppered with walkable apartment buildings and trendy restaurants.

Inside the Wild West of Scooter Chargers By Lucinda Shen

Sonos Is Reportedly Eyeing a Partnership With Roku By Don Reisinger

Tesla Has Finally Released Its Long-Promised $35,000 Model 3. Sort Of By David Meyer

Put down your phone this weekend and have some old-fashioned fun. Check out the "Fold'NFly" database of paper airplane designs. There are a couple of dozen designs to try out, with complete directions for each one. But don't be too casual about your folding. While it's easy to make the Basic Dart ("the most iconic paper airplane design"), the Fast Hawk and Star Flight are for experts only.