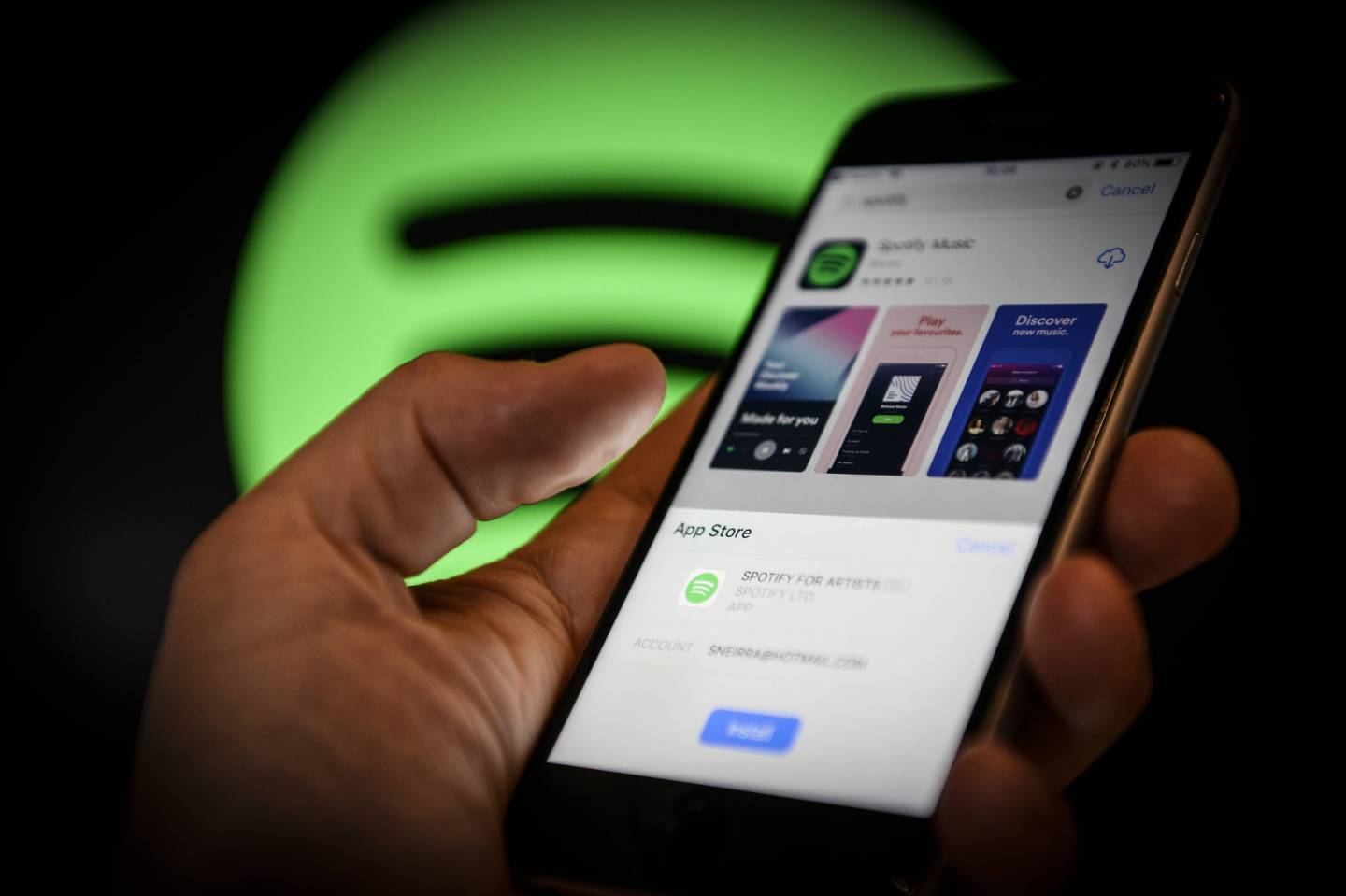 The Spotify applications is seen on an iPhone in this photo illustration on June 18, 2018.
NurPhoto via Getty Images

The stories about Spotify seemed to come in a wave last year. “The Secret Hit-Making Power of the Spotify Playlist,” reads a May 2017 Wired report. “’They could destroy the album,’” The Guardian wrote of the streaming service in August. A month later followed a Vulture profile of the most influential Spotify playlist of all: Rap Caviar. The piece’s headline: “How a Hit Happens Now.”

In other words, streaming killed the radio star. It’s no longer a secret how important Spotify playlists can be to an up-and-coming recording artist, but the means for which an artist can get a song’s placement on those playlists remains a bit murkier. The traditional route: Promote on social media. Tour as much as possible. Sell merchandise. Maybe even hire a publicist. Anything to generate buzz and consideration on a playlist like Rap Caviar, which boasts nearly 10 million listeners and can add hundreds of thousands of streams to an artist’s song.

But all of that can take time. If you have money, a new crop of companies will offer a shortcut.

This burgeoning industry does what is known as “playlist pitching.” That is, companies pitch an artist’s music to curators with popular playlists on Spotify. Artists pay these firms for a campaign, which can cost hundreds of dollars. The companies review the tracks and, if deemed the right fit, pass them along to a network of curators within the appropriate genre. The curators, paid by the pitching companies, review the songs themselves, deciding if it’s good fit for their playlist. Either way, they’ll give the artist constructive feedback on the composition of the tracks. But if the curator thinks it will mesh with the rest of their playlist, they’ll add a song, potentially exposing the artist to thousands of streams, one by one increasing their popularity and royalty payouts.

There are a few catches. The most important one: None of these curators are employed by Spotify. Artists can’t pay to get on one of the 4,500 in-house playlists that are served up to the streaming service’s 170 million monthly active users. Spotify tried to address this matter in July, releasing a feature on its artists’ platform that lets musicians and labels upload unreleased tracks for consideration on playlists managed by Spotify editors. But the feature is still in beta, and there is no guarantee tracks will be accepted. “We want to make something crystal clear: no one can pay to be added to one of Spotify’s editorial playlists,” Spotify states. “[Our editors] make these decisions using data about what’s resonating most with their community of listeners.”

So artists who want guaranteed placement on playlists have to rely on independent curators instead. They might be DJs, or musicians themselves, or an everyday Spotify user who enjoys curating parties or road trips. The curators do, however, need to manage playlists that have a significant following. One notable pitching company, Playlist Push, requires a playlist to have at least 400 followers.

Playlist Push, established last June, says it has more than 300 curators on its platform, and works with more than 600 artists and brands to date. The company claims its network of playlists combined reaches more than 8.4 million users. Its founder, George Goodrich, tells Fortune that in just over a year, Playlist Push has run more than 1,200 campaigns, with artists on average getting added to 12 to 15 playlists. Those can range from Christian worship to hip-hop to jazz and so on. Another pitching service, The Falling Apple, offers similar numbers: more than 8 million total Spotify followers. A spokesperson added that the company has generated more than 210 million streams for its clients, with more than 5,500 placements on Spotify playlists.

With numbers like that, it’s easy to see why musical artists are willing to pay for instant connections to playlist curators—DJs for a streaming age—rather than gradually building their brand. “Spotify is really tough to navigate as an artist,” Goodrich, whose company’s rates for a campaign start at $150, said. “It’s really hard to find people to listen to your music. You can only tweet your Spotify profile so much.” And placement on independent playlists can help artists move up in the Spotify playlist ecosystem based on harvested data. “When your fans save your music to their playlists, it’s one more signal about the type of music they like,” the Spotify for Artists guide to playlists states. “We can use that to help recommend your music to people who have similar listening habits as your fans.”

There are, of course, questions about the legitimacy of these pitching services, their playlists, and whether they’re working for or against Spotify. Spotify itself declined multiple requests for comment on the matter, but the company states in its terms of service that “accepting any compensation, financial or otherwise, to influence the name of an account or playlist or the content included on an account or playlist” is prohibited.

Brian Hazard, a synthwave artist who goes by Color Theory, published several blog posts about his experience using pitching services. A track he sent to The Falling Apple was rejected, though Hazard tells Fortune he respected that decision because it indicated the service was more selective. Playlist Push, however, accepted the same track, “Glory Days,” and sent it to 53 curators. Of those 53, five ended up adding it to their playlists. One of those playlists doubled in two days from 13,500 to 26,000 followers, indicating it added fake followers, which he says is rampant on the Spotify platform. Hazard describes another as “a grab bag of artists with low listener counts. My guess is that it was created as a repository for all Playlist Push tracks.” Other curators, he said, gave vague reviews of his track or seemed to approve every track sent their way despite quality in order to earn maximum income from reviews. Altogether, Hazard saw little to no movement on his Spotify streaming numbers.

Goodrich ended up offering Hazard a re-do after the posting of his first blog post and said he had a better user experience the second time around, though his streams still didn’t increase as much as he’d have liked. Asked about his current feelings on Playlist Push and companies like it, Hazard says: “A lot of people say these guys are scamming artists. It’s a crooked industry. I would stress you’re really paying to use software to connect with curators. That’s kind of all there is to it. I see it as neutral at this point.”

Managing expectations is a critical aspect of the playlist pitching business. Scroll through threads on Subreddits like WeAreTheMusicMakers and you’ll find comments like, “DONT [sic] USE PLAYLIST PUSH. THEY RIPPED ME OFF. $300 down the drain…” Goodrich said he tries to make his company’s capabilities clear from the beginning. “If the artist posts their first song on their [Spotify] profile and they have no audience, should they expect 2,000 streams? Probably not,” he says. “We don’t guarantee anyone any amount of streams.” The Falling Apple told me the opposite. “We always pitch as long as needed in order to hit our guarantees. We always guarantee results within a specific range.”

One thing appears to be clear: From the curator perspective, pitching services offer playlisters a chance to monetize a hobby. Spotify user TJ Jones was attending college and driving Uber cars on the side when he posted a viral tweet that led to thousands of Spotify followers.

“So I just started driving for Uber and Lyft and I’ve been getting a lot more compliments on my music since generalizing my passengers by 1 of these 11 playlists,” Jones wrote, with screenshots of playlists with titles like “Heady bros” and “White dudes who look like they rap.”

Jones now boasts more than 45,000 followers on Spotify and curates playlists for Playlist Push and SubmitHub, a platform that allows artists to pitch music bloggers, record labels and Spotify playlisters.

Jones says that in the four months he’s worked with Goodrich and Playlist Push, he’s made enough money to quit driving Uber for good and focus solely on playlist curation. He said he makes $7 to $8 per track review—regardless of whether he adds a song to his playlists—which is based on a points scale that measures the amount of Spotify followers and playlists he has. He estimates he works about three hours a day and pulls in roughly $350 to $400 a week curating music, and says he’s gotten artists placed on official, personalized Spotify playlists such as Discover Weekly. The pitching services, he says, are “really just about music promotion. I didn’t mean for these playlists to blow up, but now I have this opportunity to help artists.”

The desire for both sides is there, but it remains unclear how this relatively new industry will proceed, or if Spotify itself will intervene. “It’s a whole wild, wild west for these playlist pitching companies,” says artist Mayo Staccato, who requested not to use his real name. “I don’t know if there’s enough quality control yet.” But, he adds, the concept has potential and likely isn’t folding anytime soon.

“It can be legit. Sooner or later we’re going to come across a service that has some sort of accountability,” he says, “As long as Spotify is dominant, like it or not, I think this is going to be the future trend in music marketing.”