Reunited Immigrant Families Have a Difficult Choice to Make 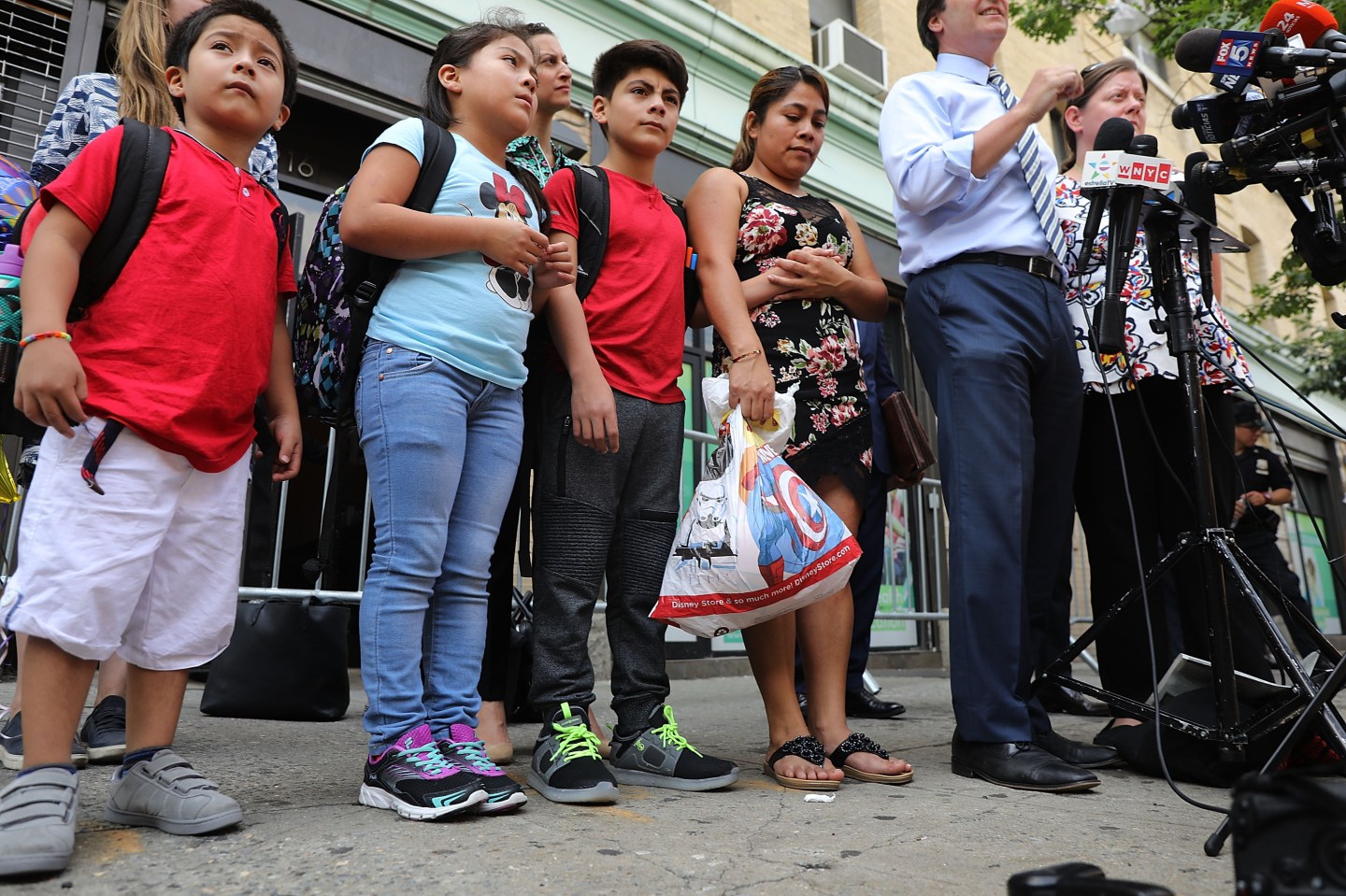 NEW YORK, NY - JULY 13: Yeni Maricela Gonzalez Garcia (R) stands with her children (L-R) 6 year-old Deyuin, 9 year-old Jamelin and 11 year-old Lester as she and her lawyer speak with the news media after she was reunited with her children at the East Harlem Cayuga Centers on July 13, 2018 in New York City. Gonzalez Garcia, from Guatemala, drove cross-country to be reunited with her three children after they were taken from an Arizona immigration facility over eight weeks ago. Gonzalez Garcia crossed over the U.S. border with her three children on May 19, only two days before they were taken from her as part of President Donald Trump's controversial zero-tolerance policy of removing immigrant children from their parents after they are detained. (Photo by Spencer Platt/Getty Images)
Spencer Platt—Getty Images

Escaping gruesome violence at the hands of police and gangs in Honduras, a mother and her daughter arrived in the U.S. on June 8 near McAllen, Texas, and turned themselves in to federal agents. They were then separated and held in custody 1,555 miles apart, according to court filings.

The 12-year-old daughter is now among a couple thousand migrant children that the U.S. is working to reunite with parents over the next two weeks following a federal judge’s order last month.

Once that happens, the parents will face a difficult choice: Throw the whole family at the mercy of the immigration system for a shot at staying legally — or immediately turn the children over to U.S. authorities so at least they won’t be forced to leave even if the parents are deported. The latter could mean that the Honduran mother, who is identified only as Jane Doe in the court record, may not see her daughter, A.M., for years.

“The dangers some of our clients face in their home countries have had them considering this very question,” said Leslie Thorne, Doe’s attorney in Texas. “Which really tells you something about what they’re fleeing.”

Under a 1997 agreement, the U.S. doesn’t allow long-term detention of immigrant minors. President Donald Trump tried unsuccessfully in recent weeks to change the rules while grappling with a public backlash over his “zero tolerance” crackdown on illegal border crossings. On Friday, the American Civil Liberties Union and U.S. government attorneys disclosed an agreement that leaves it up to immigrant parents to decide whether their children will stay with them in detention or be placed with social service workers.

For the government, the agreement ensures its authority to detain adults in federal custody remains intact while families are reunified. The ACLU, meanwhile, got an assurance that if families consent to being held in custody, they aren’t waiving other legal rights going forward.

To meet a July 26 deadline to complete the reunification process, the government laid out a plan in which Immigration and Customs Enforcement will identify six to eight locations where as many as 200 kids a day will be reunited with parents. The focus now is on kids ages 5-17 after the government reported this week that it had complied with an earlier order to first concentrate on children under 5.

At a hearing Friday in San Diego federal court, the judge overseeing the process commended the government on its progress so far while urging officials to keep up the pace. He set another hearing for Monday and said he wants six status reports filed before the deadline.

“It is important to begin reunifying now,” U.S. District Judge Dana Sabraw. “It should be a very straight-forward process. I know it will take a lot of staffing, but it should be done. Parents and children should be reunited.”

The judge directed the U.S. to cover the cost of all reunifications after the ACLU asserted that families were being forced to pay for travel expenses and DNA tests to prove parentage. Justice Department lawyers said the cost would be “a huge ask” of the U.S. Health and Human Services Department.

Both sides voiced concerns that the fast pace of the process carries perils.

An ACLU lawyer said he fears that many families, once reunited, will be promptly deported before they can apply to stay in the U.S. A Justice Department attorney said the government would make no promises that it won’t deport any families over the next week.

The U.S., meanwhile, said in a court filing that using expedited procedures increases the risk that children will be handed over to people who falsely claim to be their parents or placed into situations that endanger the children.

The Health and Human Services Department said it has identified 2,551 migrants in the 5-17 age group who are “potentially” eligible for reunification, but that some adults are expected to be ruled out as parents or deemed otherwise unfit to take custody of the children. The agency initially estimated “under 3,000” children were covered by the court-ordered reunification process.

“As our case workers have further refined the files and conducted interviews, we have been able to determine that a number of children who may have qualified under the court case are not in fact eligible,” the department said Friday in a statement. “This includes, for example, cases where a child was reported to have traveled to the U.S. with a parent, but upon further examination it was learned that a separation occurred prior to crossing the border, or cases where the adult purporting to be a parent was found not to be a parent.”