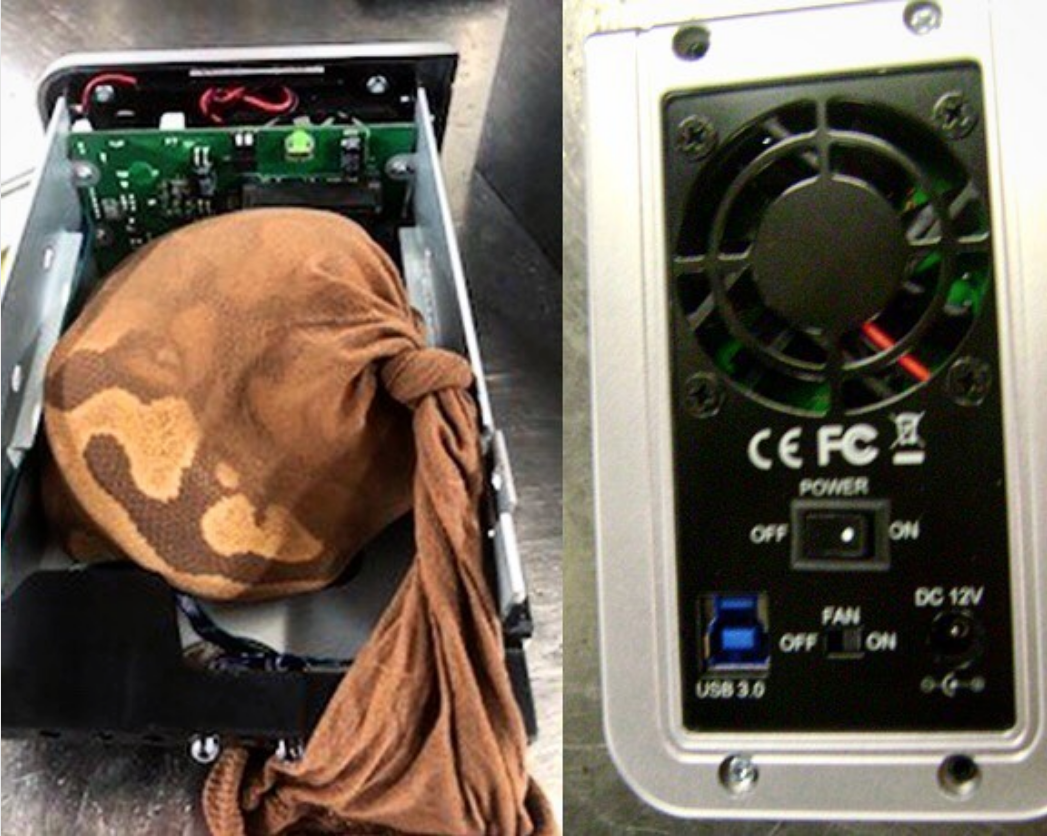 In a series of events fresh out of a horror movie, a python nearly made it onboard a plane in Miami on Sunday.

The Transportation Security Administration discovered the large snake coiled inside an external hard drive tucked away discreetly inside a piece of checked luggage. Neither the snake nor the passenger who put it there made it on oard their Barbados-bound flight.

“Upon the TSA officer’s discovery of the organic mass, one of our TSA bomb experts was called into the baggage screening room to investigate the innards of the hard drive and that is when he discovered the mass was a live snake,” TSA spokesperson, Sari Koshetz, told the Miami Herald Monday.

Agent Neville Flynn would be extremely proud of our officers at the Miami International Airport (MIA). You see, Agent Flynn has HAD IT with snakes on planes, and our officers prevented a young Ball Python from flying the friendly skies this past Sunday. … A traveler on her way to the Grantley Adams International Airport (BGI) in Barbados attempted to smuggle the snakelet inside of an external hard drive packed in her checked bag. If you think airplane seats can feel constricting, imagine how this little guy felt! Talk about bad memories! … While the python itself posed no danger to anyone on the aircraft, an organic item concealed inside electronics raises security concerns, which is why our officers took a closer look. … The U.S. Fish & Wildlife Service ( @USFWS ) was notified. They responded and took possession of the snake and cited the traveler. Both the traveler and the snake missed their flight. … Conversationally, this python had not gone full monty. It was wearing a nylon stocking. … #SnakesOnPlane #SnakesAlmostOnAPlane #MIA #BGI #Miami #Barbados

U.S. Fish and Wildlife Services officials rushed to the scene to collect the snake and the passenger was fined an unnamed amount, according to the Herald.

“While this mass inside the electronic device was obviously not an imminent terrorist threat to the traveling public, the interception did prevent a possible wildlife threat on an aircraft. Animals of many species have been known to escape and chew through wires with fatal results,” Koshetz said.

This is not the first time a passenger has attempted to sneak a unique pet onto a flight.

In a separate incident at the Miami International Airport, in 2011, a man was arrested at a checkpoint after officers discovered he had stuffed seven small snakes and three turtles into his trousers.

“No, turtles and snakes are not accessories permitted through our checkpoints,” Koshetz said.

Airlines are also cracking down on the allowance of animals on their flights.

After a passenger attempted to board her flight with an emotional support peacock in March, United Airlines rolled out a new strict policy requiring written vet-approval in order to travel with service animals. Several airlines have since followed suit and have also extended the list of banned animals onboard flights.