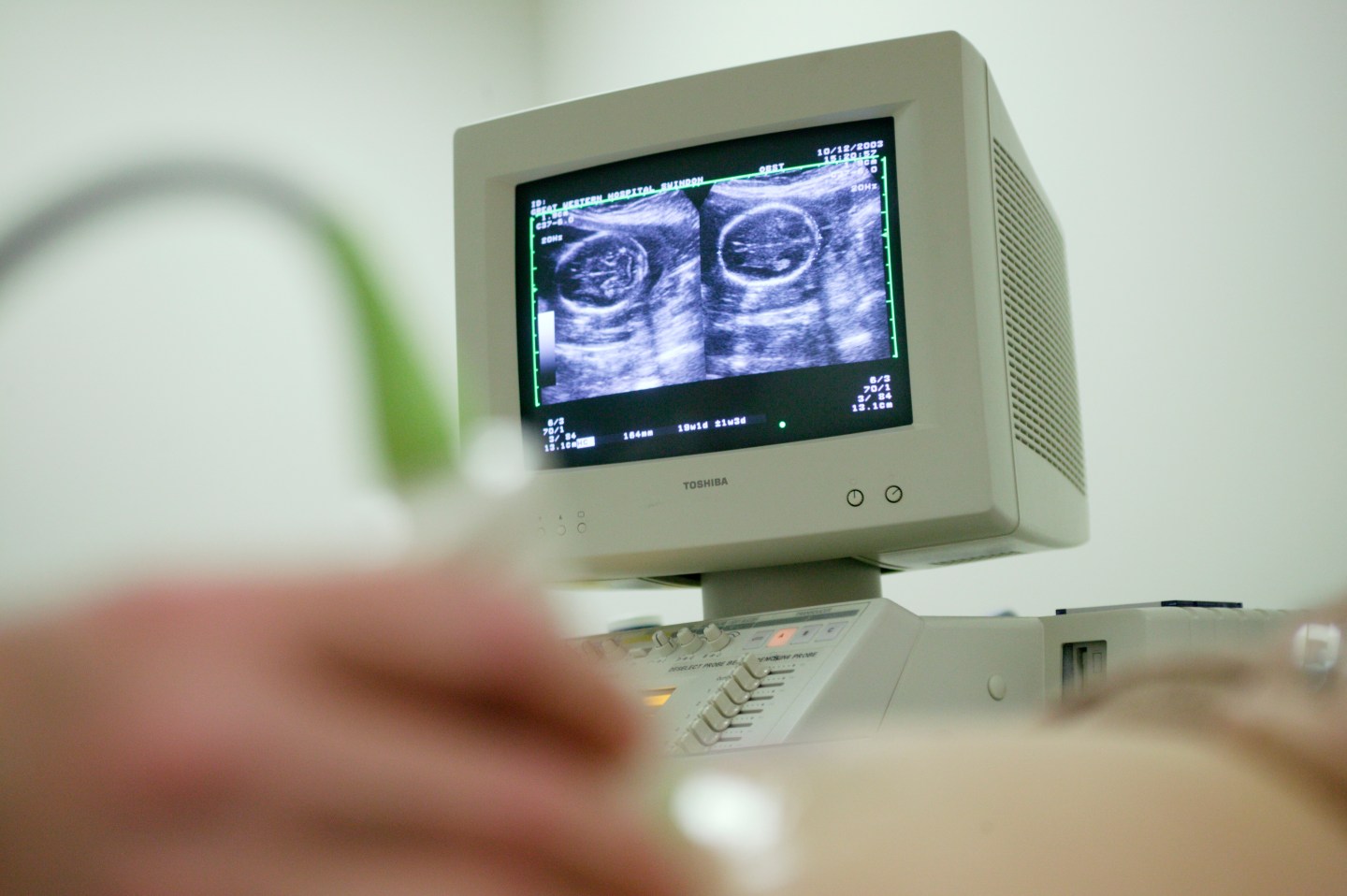 Pregnancy ultrasound. Display of an ultrasound scan of an unborn child. A transducer (blurred, in hand, in foreground) is being used to scan the swollen abdomen of a pregnant woman. The transducer emits high-frequency sound waves and detects the reflected echoes. The results are used to build this image of the developing foetus in the womb. This safe, non-invasive procedure is used routinely in pregnancy to assess the growth and health of the developing foetus. This is a standard anomaly scan, carried out when the mother is 20 weeks pregnant. The detection of a serious anomaly at this stage (halfway through pregnancy), allows surgery or a termination to be considered.
Michael Donne — Science Photo Library/Getty Images

A new study published by Doximity, the social media network for U.S. health care professionals, examined factors impacting the specialty. These include the high workloads that vary from city to city, an insufficient number of people under the age of 40 practicing, and private versus government insurance coverage. Each affects the likelihood that metropolitan areas will experience shortages in the coming years.

But women are already feeling the effects of a workforce stretched thin in some U.S. cities.

“Take Riverside, Calif., where we found that the typical OB-GYN is responsible for around 250 births per year and compare that to Providence, Rhode Island, where we found around 80 births per year,” said lead author of the study, Chris Whaley. “If you’re a woman in Riverside, it’s probably much more difficult to find an OB-GYN and get an appointment or even find an OB-GYN that you like and are comfortable with.”

Using their research, Whaley’s team created an index for the cities most likely to experience OB-GYN shortages. Las Vegas is most likely, followed by Los Angeles, Miami, Orlando and Riverside, Calif.

Metropolitan Areas With the Highest Likelihood of an OB-GYN Shortage:

The aging OB-GYN population in the U.S. contributes greatly to the coming shortages. Only 16% of all OB-GYNs are below the age of 40, while 36% are over 55.

The average age is 51, and OB-GYNs tend to retire earlier than usual, at the age of 59. The average working American retires at 64. OB-GYNs experience the most burnout after emergency room doctors, which could lead to the early retirement, according to the study.

Another factor leading to burnout is the type of insurance coverage that patients have. The study found that regions with higher workloads “also tended have higher numbers of women of child-bearing age covered by Medicaid or uninsured relative to the privately insured population.” Similarly, places like Ann Arbor, with lower workloads and a younger distribution of OB-GYNs, tended to see more women privately insured.

“In a lot of the areas that are most stressed, there is a correlation between that workload impact and the percentage of the given patient population that are relatively underserved, using Medicaid and Medicare as a proxy for that,” said Dr. Amit Phull, vice president of strategy and insights at Doximity.

He said that he hopes this study will start a conversation around the care that underserved people are receiving in this field and thus, prevent it from getting worse.

“We hope these insights will help inform key stakeholders in developing solutions at both the local and national levels,” Whaley said in a statement.

Phull said that those solutions may be challenging because so many stakeholders are involved. Specialty-wide organizations like the American Congress of Obstetricians and Gynecologists, individual hospitals and health systems, and educational programs will all need to work together.

“It is thorny enough of an issue that it does require a decent amount of coordination for the long haul from some of those big players,” Phull said. “This is the kind of issue that will become more pressing at the locality first, then once it bubbles up to hit enough large places in the U.S., that might be the impetus for beginning to really take action to mitigate this problem from spreading even further.”