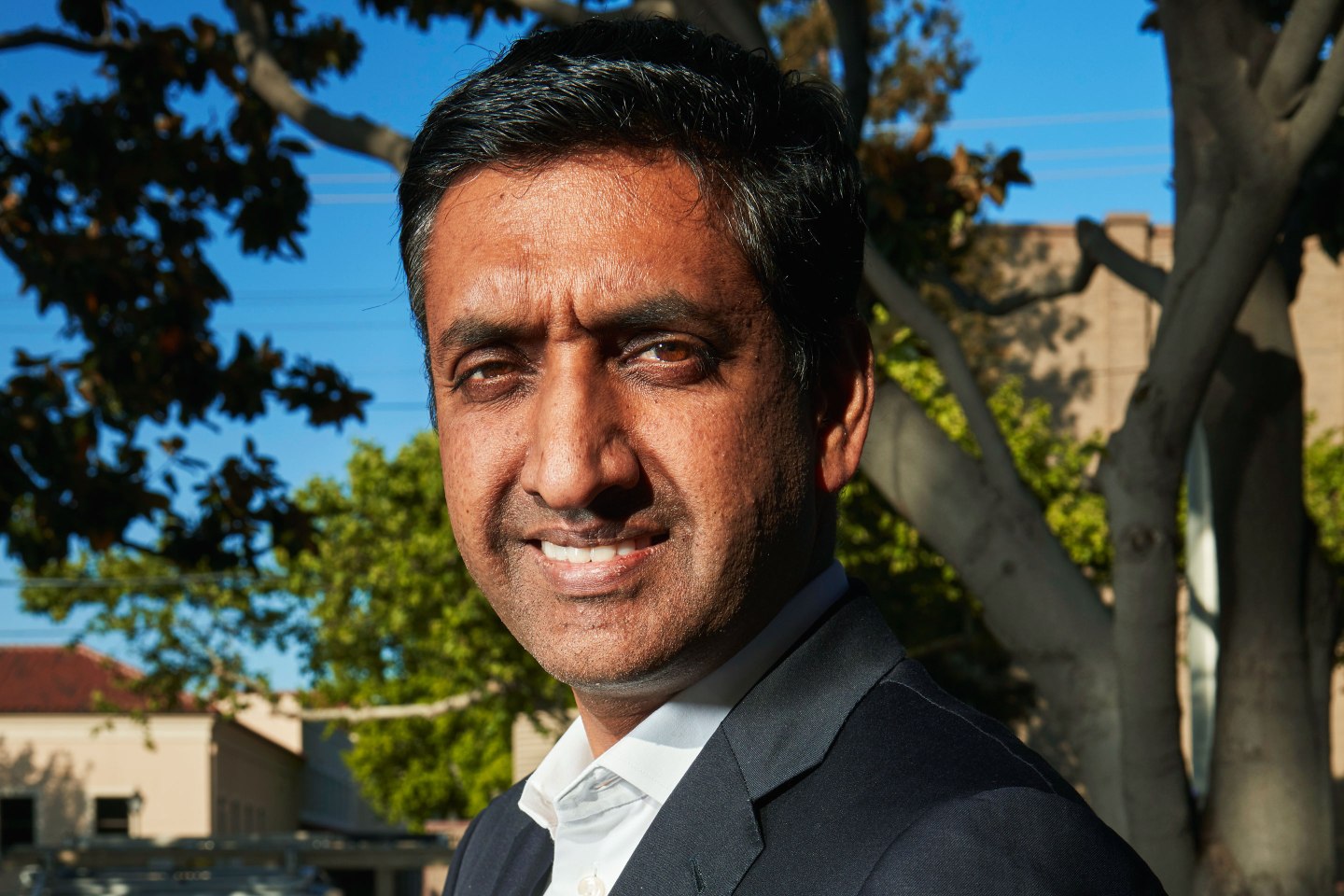 Photographed by Brad Wenner for Fortune

Life, liberty, and the pursuit of happiness make for an awful Terms of Service contract. But Rohit “Ro” Khanna is adamant about pushing an Internet Bill of Rights. The freshman representative from California is the most noteworthy member of Congress you’ve never heard of. ­As he seeks reelection, that’s about to change.

His district includes some towns you might know—Cupertino, Fremont, Santa Clara, Sunnyvale—and some corporate headquarters you definitely know: Apple, Google, Intel, Oracle, Tesla. The district is 54% Asian and 29% white. It has more foreign-born residents than native-born. The median income is $121,000, more than twice the national average; an 848-square-foot home in Sunnyvale recently sold for $2 million. It’s Anytown, USA, circa 2080—making Khanna a weird guy in a weird district on a weird mission. When Apple, which has more cash on hand than the U.S. Treasury, is located in your constituency, is serving it still an act of public service? A smart use of taxpayer dollars? Okay, Google, all set? Yeah, thought so. How do you serve entrepreneurs with a private space fleet?

Here’s a disruptive idea: You don’t. Armed with expertise in intellectual-property law and experience as a Stanford economist, Khanna aims to de-jargonize Silicon Valley with the belief that if a policy cannot be explained in laypersons’ language, then it is not common sense.

Yes, Khanna was one of the creators of the Antitrust Caucus, attacking Amazon’s Whole Foods takeover and the AT&T–Time Warner merger, while letting Apple, Facebook, and Google slide by. But he is quick with the receipts on Apple’s boast of bringing $350 billion back to the U.S. It’s more like $35 billion, he says. And Khanna is wary of Facebook’s ownership of Instagram and WhatsApp (he advocated for a stronger, tougher Federal Trade Commission long before it launched an investigation into Facebook). He says he was joking when he said “some of the engineers in the Valley have the biggest egos known to humankind,” but he never says the joke is untrue. He floats the idea of a job displacement tax on corporations but also calls breaking up companies “the nuclear option.” Two months into the job, he helped trigger the investigation of an Ohio defense contractor for operating as a “hidden monopolist.”

The one predictable thing about Khanna is that he’s a Democrat representing California’s 17th Congressional District. The rest is up for grabs, and so far, it’s been a hell of a grab. Forty-one, Hindu, and of Indian descent, the economist sticks out on Capitol Hill—though like 41% of Congress, he has a law degree (from Yale) and, like 39% of Congress, he’s a millionaire. Khanna favors congressional term limits (12 years, which would wipe out huge swaths of Congress) and cocreated a No PAC Caucus consisting of, for now, just Khanna and Rep. Beto O’Rourke. With a net worth of $27 million, he is the fourth-richest member of California’s delegation (thanks to his heiress wife) but maintains $50,000 in student debt because, he says, “We keep separate finances.” He cites Bain and McKinsey studies or Alexis de Tocqueville quotes like he’s doing a walk-and-talk in an Aaron Sorkin script, and casually references German philosopher Jürgen Habermas during his “office hours” listening sessions with constituents at a Panera Bread across from a Party City. He is a whip-smart firecracker of defiance, and he is just getting started.

Not everyone agrees. “Khanna is a smart man, a thoughtful man, but he’s not a member of Congress. Nobody in that seat is. That’s the seat we give to this lobby we call Big Tech,” says Scott Galloway, author of The Four: The Hidden DNA of Amazon, Apple, Facebook, and Google. “One billion iPhones are preloaded with Safari, and 2 billion Android phones are preloaded with YouTube, but Khanna wants to focus on a merger that affects 130 million people because it’s more important to him that AT&T doesn’t own Cartoon Network. Middle America doesn’t want to become the Silicon Anything. It wants to break up Apple, Google, Amazon, and Facebook, and it wants it done 10 years ago. But I wouldn’t expect Khanna to make that conclusion any more than I’d expect a tobacco country congressman to fight cigarettes or the NRA to push for gun control.”

Over days when Fortune shadowed Khanna in California and Washington, D.C., a portrait emerged of a man who has tasked himself—in a legislative body where just one of 435 representatives has a computer science degree—with being more than a post-Obama demographic first-timer. He can’t code, but he aims to be the ambassador of our collective digital future. And, as the only freshman Democrat to have passed a bill, he wants action. He recognizes that 21st-century America can’t cloister its silicon prowess in the San Francisco Bay Area any more than 19th-century America could limit banks to New York or 20th-century America could huddle manufacturing in Detroit or filmmaking in Los Angeles. He is evangelizing the gospel of tech to Arizona, Kentucky, Michigan, Ohio, Tennessee, and anywhere else that will hear him out. Khanna positions himself as Congress’s silicon soul, marrying tech’s magic with old-school, blue-collar hustle. “Silicon Valley needs partners,” he says. “You can’t do edited manufacturing just in the Valley. Why not have the DNA of manufacturing but combine it with the digital world?” It’s not difficult to extend Khanna’s line of thought: Why not teach coal miners to mine data? Why not teach car mechanics to fix robots and 3D printers? Why not teach farmers to harvest solar and wind energy? Yet, while his desk is strewn with copies of Brotopia and Dark Money and his in-box is full of back-and-forths with Robert Reich, his digital worldview has found an unlikely framer in W.E.B. DuBois, a titan of black intellectualism who cofounded the NAACP in 1909. Khanna recently finished DuBois’s 1903 book, The Souls of Black Folk.

“DuBois and Booker T. Washington had this fascinating debate about whether black education should focus on skills or on the bigger notions of poetry and philosophy and history and art,” he says. “It was STEM vs. STEAM, even back then. It’s an incredible cultural case study. So that’s what I read instead of a Tim Ferriss book or whatever.”

Broadly, Khanna wants to avoid a Sputnik moment in the global race to develop artificial intelligence and is kept awake by a sweeping fear. “Imagine a world where Apple, Google, and Intel were Chinese companies,” he says. “It would be scary.” He wants tech to be more human and innovation to be more accessible.

He learned from the best. In 1996 as a student at the University of Chicago—long known as a place “where fun goes to die”—Khanna knocked on doors in a local race on behalf of a fellow weirdo named Barack Obama. When Obama shot into the White House 12 years later, Khanna sent in an old letter of thanks Obama had written him and begged for a job in the administration. “I tried very, very, very hard,” he recalls. “I was very, very, very persistent.” He became deputy assistant secretary at the U.S. Department of Commerce. In 2014 he ran (and lost) against longtime representative Mike Honda. Khanna ran again and won, but under a dark cloud (his campaign manager resigned after a lawsuit accused him of email hacking). Now Khanna is up for his first reelection. In Congress, Silicon Valley, like the rest of the country, gets an OS update every two years.

Thank God. In 2011 investors proposed Blueseed, a fix for tech’s H-1B visa crisis that was, in essence, a luxurious slave ship anchored in international waters off the coast of San Francisco, offering tenants day passes into the country. In 2013 venture capitalist Tim Draper proposed to fracture California into six states (he later revised it to three). In 2015 the Russia-linked CalExit secession plan emerged. Does America really need that crackpot thinking infecting the hinterlands?

“I’m a technology optimist, and I’m glad to see a fellow technology optimist working hard in Washington,” says Jonathan Levin, dean of Stanford’s graduate school of business and a friend of Khanna’s. “I want optimism, given the alternative.”

On the bright side, the tech industry itself has galvanized an egalitarian awakening as toxic brogrammer culture gives way to leaning in and #MeToo empathy. At a gender equity panel he convened at Santa Clara University to shatter Silicon Valley’s quid bro quo, Khanna sat onstage with eight powerful women (and no men), including senior staff from Facebook, Google, and LinkedIn.

He took the center seat.

This article originally appeared in the June 1, 2018 issue of Fortune.