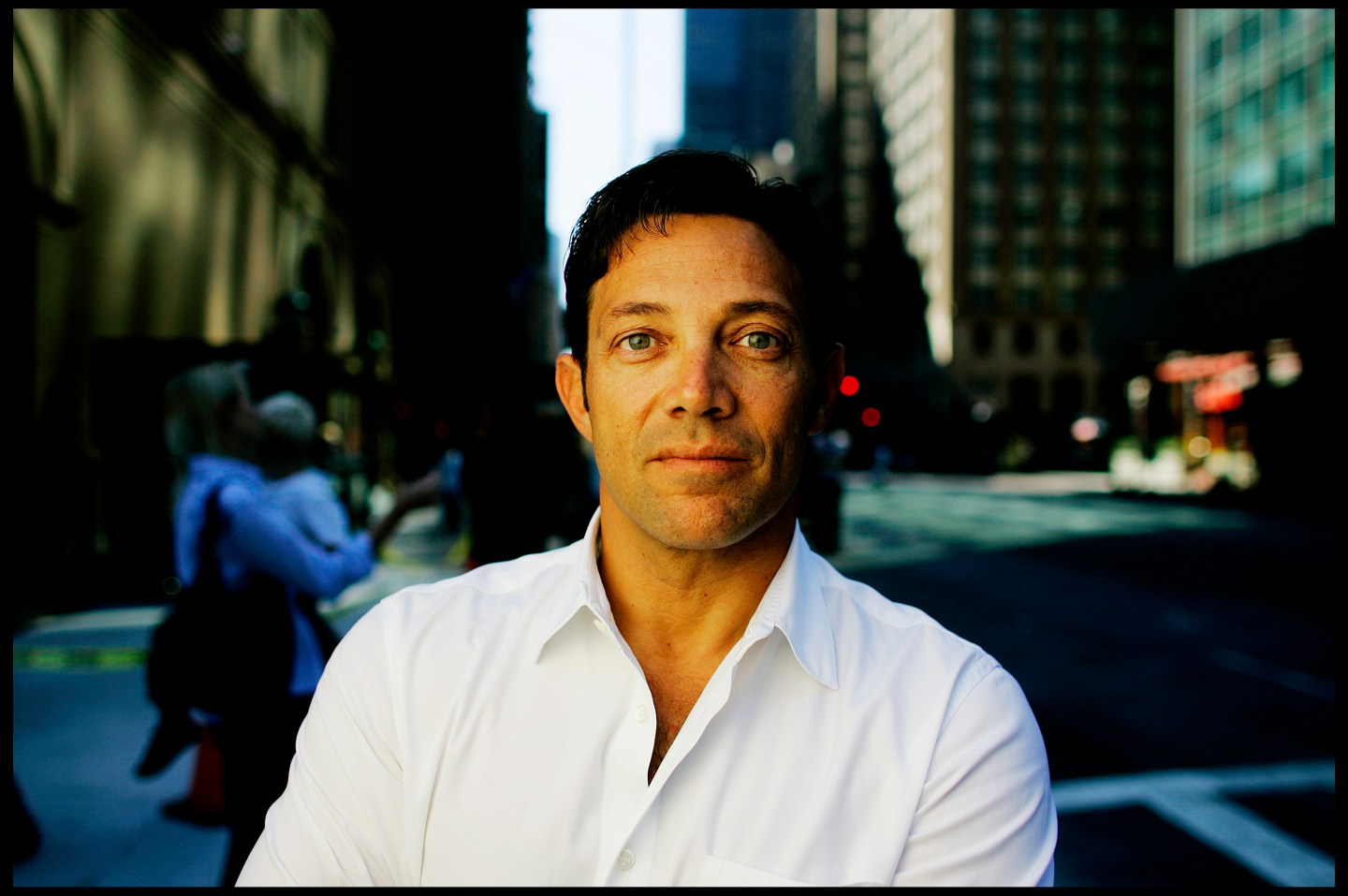 Jordan Belfort, the “Wolf of Wall Street,” isn’t just a con, but also a deadbeat, prosecutors say, and they want him to pay up.

For those who’ve forgotten, Belfort operated a penny-stock boiler room on New York’s Long Island called Stratton Oakmont Inc. His brash behavior was glorified on screen by Leonardo DiCaprio in the movie based on Belfort’s memoir. The 2013 film made about $100 million and helped start Belfort’s second career as a motivational speaker.

At his sentencing in 2003, Belfort was ordered to pay $110.4 million in restitution and other penalties, but the government says he still owes about $97 million. At a hearing on Wednesday after prosecutors complained, U.S. District Judge Ann Donnelly in Brooklyn, New York, said Belfort must meet his obligations.

“It seems like he has some spare change lying around,” Donnelly said, adding that Belfort should be questioned by prosecutors about his income.

“Sorry to interrupt his busy schedule,” she said. “He’s going to have to come here so we can get a grip on what’s going on.”

Belfort’s lawyers and prosecutors are tussling over legal technicalities concerning whether income he’s received is subject to garnishment.

Prosecutors say in court papers that Belfort paid about $700,000 to victims between 2007 to 2009, and nothing in 2010; he has also paid $12.8 million, mainly from property he relinquished at sentencing, they say. Belfort and his lawyer, Sharon Cohen Levin, dispute the government’s numbers and what he must pay.

Anyone who hoped Belfort would make a cameo appearance — at the same courthouse where he was sentenced –was disappointed. He was scheduled to be in Lithuania giving a motivational speech.

Cohen Levin argued that Belfort is “cash-strapped.” One of the payments in dispute, ownership units in a startup, may be of “no value” or “may be of extraordinary value,” she said. She argued the shares weren’t subject to the restitution order.

Belfort was released from prison in April 2008. He was convicted of defrauding 1,513 investors out of more than $200 million and sentenced to four years behind bars. He was also ordered to pay 50 percent of his gross income to victims after he was freed.

When government lawyers learned of the deal to publish Belfort’s memoir in April 2007, they filed restraining orders against Bantam Books, Warner Brothers and Appian Way, a film production company founded by DiCaprio. Belfort eventually agreed to pay 50 percent of his earnings from the movie to the U.S., but another dispute recently erupted over Belfort’s income as a motivational speaker and other dealings.

Prosecutors say Belfort earned at least $9 million in speaking engagements between 2013 and 2015 but pocketed it all. He has also collected other income from a building-design business, they claim.

In 2014, during a global speaking tour, Belfort said he hoped to earn “north of $100 million” by giving speeches about his “redemption,” which would allow him to repay victims.

“Once everyone is paid back, believe me I will feel a lot better,” he said at the time. “My goal is to give more than I get, that’s a sustainable form of success.”