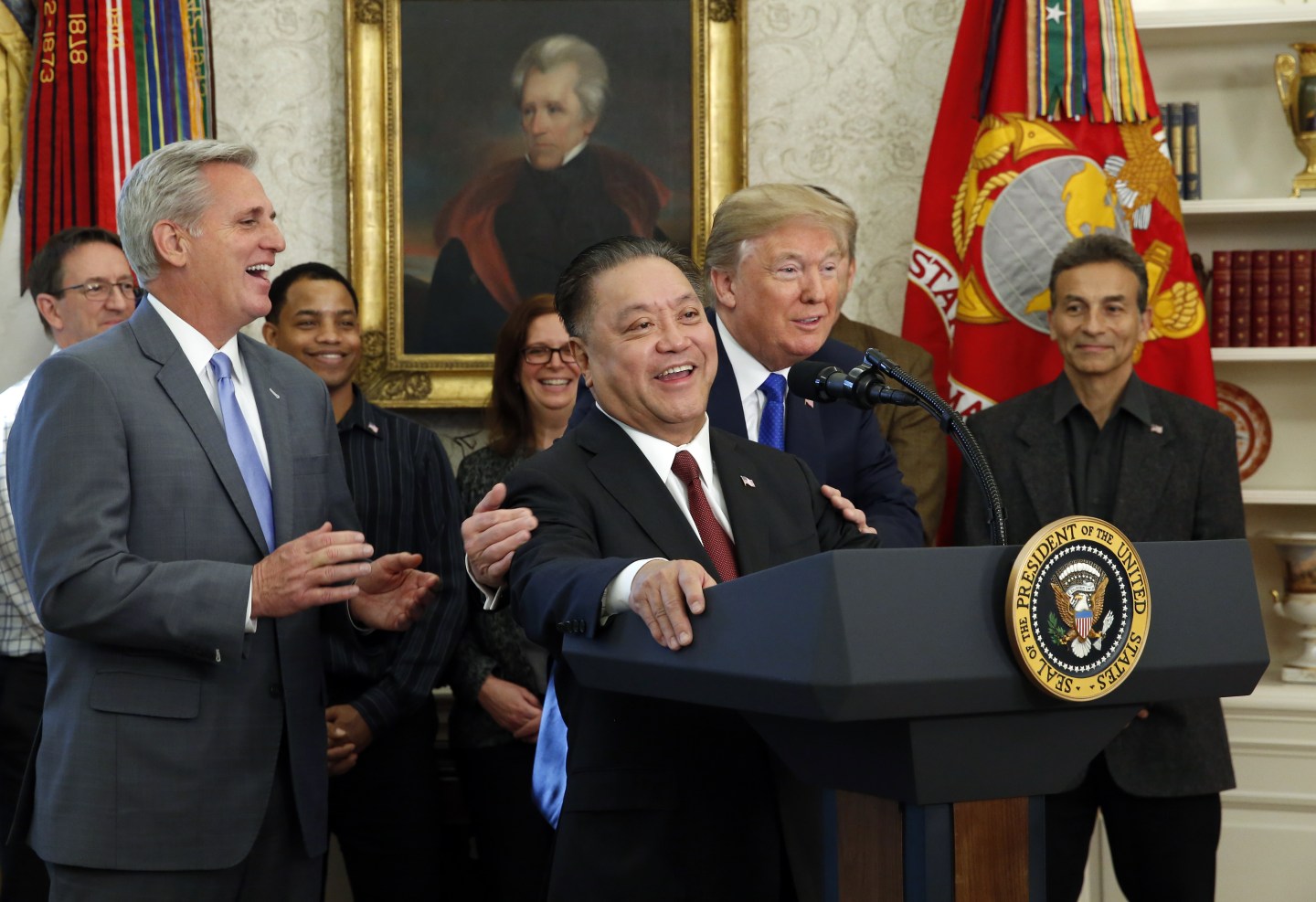 Hock Tan, chief executive officer of Broadcom Ltd., center, speaks as U.S. President Donald Trump, center right, listens during an announcement in the Oval Office of the White House in Washington D.C., U.S., on Nov. 2, 2017. Tan said the company will return its headquarters to the U.S. from Singapore and the move to domicile the company would bring $20 billion in revenue into the country. Photographer: Martin H. Simon/Bloomberg via Getty Images via Pool
Martin H. Simon—Bloomberg via Getty Images

The title of highest-paid CEO among the U.S.’s largest companies goes to Broadcom executive Hock Tan, who earned $103.2 million in 2017.

In 2017, Tan had a base, cash salary of $1.1 million, plus a performance bonus of $3.7 million for exceeding revenue and operating margin targets in the year. Also wrapped into his nine-digit payday: some $23,234 in travel expenses for Tan to travel to his Pennsylvanian residence (Broadcom completed its move from Singapore to California in April), as well as $16,200 in 401(K) employer matching contribution, and another $36,386 for car service.

But all of that pales in comparison to the shares Broadcom awarded to Tan that had a value of $98.3 million, according to regulatory filings. All together, Tan earned $103.2 million—about 318% higher than a year earlier.

And so on the face of it, Tan earned roughly 2,039 times more than the average U.S. worker, who pulled in $50,620 according to the Bureau of Labor Statistics.

Still, it’s not as simple as that. That $98.3 million in stock awards won’t be immediately available to Tan. Instead, those stock awards will vest in 2020 and 2021, while the number of shares Tan will be eligible for will also depend on the value of Broadcom shares at the end of those two periods.

The compensation structure, common in many companies, is used to keep CEOs in their jobs over the long run, while tying their compensation to the company’s health. In doing so, the logic goes, chief executives are more motivated to improve and grow their company rather than making decisions based on the short term.

Even when factoring that in, however, it is hard to deny that the gap in pay between CEOs and the average worker is startling. According to the Journal, CEOs received raises of 9.7% or better compared to last year. Average hourly earnings for all U.S. workers, in contrast, rose 2.9%.

It’s no new trend. Adjusted for inflation, CEO pay skyrocketed 997% between 1987 and 2014—vastly outpacing the 10.9% gains made by the typical workers, according to a study from the Economic Policy Institute. But lawmakers and regulators are now making changes to tax laws and reporting standards in the hopes of addressing that gap. The Securities and Exchange Commission now requires companies to include pay-ratio disclosures, particularly the difference between median worker pay and that of the chief executive (Broadcom did not have to make that disclosure, as its fiscal 2017 year began in October 2016. Only companies reporting after Jan. 1, 2017 reported the ratio this year).

Separately, the tax bill signed in 2017 by President Donald Trump also does away with a tax deduction for performance-based pay. Previously, the first $1 million in executive pay was tax exempt—though any additional pay based on performance was also exempt. Under the new law, the federal government is expected to collect $9.3 billion more over a 10-year period.

Whether these changes will have an impact the trend of ever-rising CEO pay remains to be seen.