Data Sheet—How Tech Companies Are Breaking Out of Tech 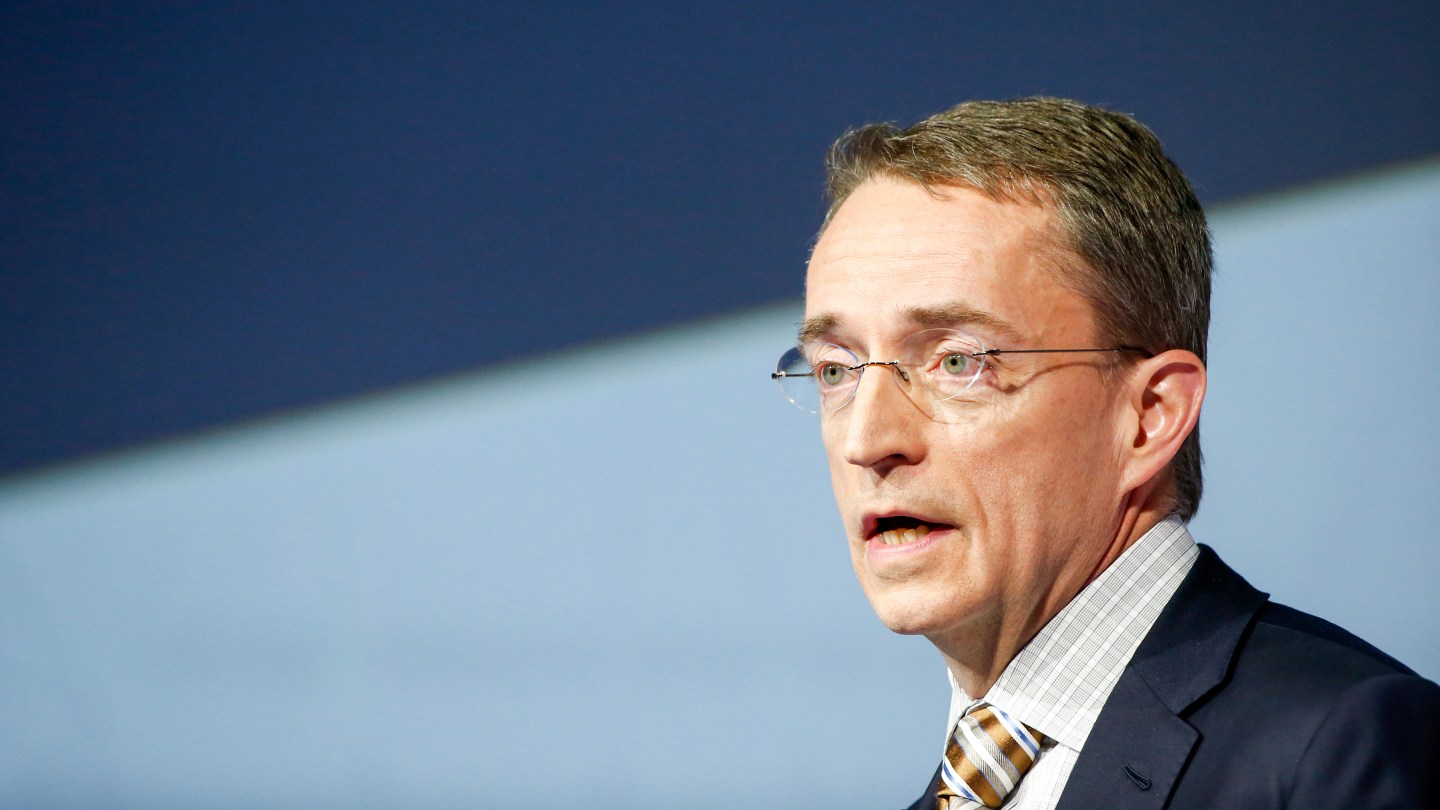 Patrick Gelsinger, chief executive officer of VMware Inc., speaks on the third day of Mobile World Congress (MWC) in Barcelona, Spain, on Wednesday, March 1, 2017. A theme this year at the industry's annual get-together, which runs through March 2, is the Internet of Things. Photographer: Pau Barrena/Bloomberg via Getty Images
Bloomberg via Getty Images

Pat Gelsinger, the Intel veteran who is CEO of cloud software giant VMWare, has an exciting view of the future of tech.

It revolves around what he calls the “four superpowers of tech today.” He’s not referring to four big companies. (Most refer to five that matter—Facebook, Apple, Amazon, Netflix, and Google—plus three in China—Baidu, Alibaba, and Tencent; they typically don’t include VMWare in that group.) Instead, Gelsinger is referring to four massive computing trends: mobile, cloud, Internet of things, and artificial intelligence.

Here’s how they all stitch together, in Gelsinger’s view. Mobile phones now connect half the world, an impossibly unexpected accomplishment for computing, translating into “unlimited reach.” Cloud computing offers “unlimited scale,” or computing capability beyond the wildest dreams of the industry’s pioneers. The connecting power of sensors everywhere “bridges the digital to physical,” says Gelsinger, in a recent interview. And AI, he says, “brings intelligence to everything.”

Despite his ebullience, Gelsinger thinks all this success and power puts a burden on the technology industry. “It’s our job to be harnessing this technology as a force for good,” he says.

As it happens, technology as a force for good has been on Fortune’s mind of late. For years we ran a “Startup Idol” competition at Brainstorm Tech in Aspen, Colo. This year we’re doing something different called The Pitch. It’s a contest designed to put a spotlight on the private sector’s freshest and smartest solutions to solving the world’s biggest social problems.

Instead of just startups, we’ll open the competition to any company, small or big, tech or non-tech, that is using technology to make the world a better place as part of their normal business operations. This is consistent with Fortune’s annual Change the World list, which isn’t about philanthropy but rather nuts-and-bolts business that does good by doing well.

The Pitch will feature five companies making 5-minute presentations in Aspen to a panel of judges, with the audience choosing a winner. The nomination period opens now, so please send ideas to thepitch@fortuneconf.com, and we’ll respond with additional details.

Thanks to all who gently reminded me Thursday that Apple is worth more than $800 billion, compared with my understatement of $800 million.

Also, you’ll see a new byline here next week—for one week only. Fortune President Alan Murray, author of the popular CEO Daily, will be guest writing the top of Data Sheet. I in turn will take his place over at CEO Daily. Please check me out there; and be nice to Alan here.

Sticker shock. Sure, yes, Amazon had an amazing first quarter. Revenue (including Whole Foods acquired in August) was up 43% to $51 billion and profit more than doubled to $1.6 billion. AWS grew 49% and the new-ish advertising business impressed as well. But the big news was CFO Brian Olsavsky, seemingly in the middle of answering an analyst's question, let out that Amazon would be raising the annual price of its Prime program to $119 from $99 starting May 11. Amazon's stock jumped 7% in afterhours trading to an all-time high and is closing in on Apple's #1-ranking stock market value.

Looking good. Elsewhere in this earnings season, Microsoft's revenue increased 16% to $26.8 billion while profits rose 35% to $7.4 billion, fueled by strong growth in cloud products and even a decent quarter for Windows. The stock rose 3% in afterhours trading. Intel also had a strong quarter, with revenue up 13% to $16.1 billion, as growth in its data center business led the way. Its shares rose 6%. Several tech companies will also be joining the ranks of the quarterly reporting parade after successful IPOs. Online software provider Smartsheet raised $150 million in its debut while electronic signature software company DocuSign brought in $629 million. And laser maker nLight raised almost $100 million.

Let the record show. A group of women who say they were sexually harassed or assaulted by Uber drivers asked the company's board to free them from private arbitration and allow them to press their claims publicly in a class action lawsuit, Bloomberg reported. “Silencing our stories deprives customers and potential investors from the knowledge that our horrific experiences are part of a widespread problem at Uber,” the 14 women wrote.

If at first you don't succeed. The second generation of Snapchat's camera glasses called Spectacles went on sale for $150, adding photo taking in addition to video recording capability. The new model is said to be more comfortable to wear and water resistant. Gen One wasn't a huge success and led to a $40 million write down.

If at first you don't succeed, the sequel. There will no future generations of Wi-Fi routers from Apple. The iPhone maker said it was discontinuing its line of AirPort base stations.

Odd pickup. Square continued its effort to expand into business services beyond payments, agreeing to buy website builder Weebly for $365 million. On a call with reporters, Square execs tried to play down the notion that the company would go on an acquisition spree, however.

Cryptocurrency Is Not Just a Boys' Club (Glamour)

This new financial world started out much like the old one did: male and white. In the early days of Bitcoin, for example, miners were disproportionately men who racked up much of the wealth. When it came time for these lucky few to reinvest in cryptocurrency development, the teams they built reflected the original gender disparity. Stories of sudden wealth followed, solidifying a stereotype of what leaders in cryptocurrency looked like. “A lot of people say to me, ‘Why do you think there’s not a lot of women in Bitcoin, in blockchain?’” says Connie Gallippi, the founder of BitGive, the first nonprofit in Bitcoin. “I say, ‘Actually, there are. They’re just not given the same level of exposure or recognition.’ That’s the problem.”

Confidants report that Bezos spends more time in Washington than in any other city outside of Seattle—ten trips a year, give or take—and for good reason. Not content merely to own the local newspaper, the retail guru has become the owner of the largest home in DC. In 2016, he bought the former Textile Museum, a 27,000-square-foot mansion in Kalorama, and last year he began a massive renovation and expansion—the plans for which foretell the ambitiousness of the life he intends to have here. All of this prefigures the question of whether Amazon will bring its new headquarters—HQ2, in the parlance of the 20 municipalities vying to win it—to Washington, too.

After explaining that she had picked up the precepts of medieval palmistry decades ago, from an art-historian neighbor whose specialty was Hieronymus Bosch, Atwood spent several disconcerting minutes poring over my hands. First, she noted my heart line and the line of my intellect, and what their relative positions revealed about my capacity for getting things done. She wiggled my thumbs, a test for stubbornness. She examined my life line—“You’re looking quite healthy at the moment,” she said, to my relief—then told me to shake my hands out and let them fall into a resting position, facing upward. She regarded them thoughtfully. “Well, the Virgin Mary you’re not,” she said, dryly. “But you knew that.”

Janelle Monáe is crying in her spacesuit. It's early April in Atlanta, and she's in one of the basement studios of her Wondaland Records headquarters, surrounded by computer monitors and TV screens, one of them running a screensaver that displays images of her heroes: Prince, Martin Luther King Jr., Pam Grier, Tina Turner, Lupita Nyong'o, David Bowie. She's about to reveal, for the first time, something the world has long guessed, something her closest friends and family already know, something she's long been loath to say in public.

The future of TV appears to be on the Internet. After Netflix and Amazon's Prime Video, Hulu is quickly becoming a strong number three player. Natalie Jarvey digs into the streaming service's history and future challenges in a long profile in The Hollywood Reporter. She also gets into the backstory of Hulu's award-winning dystopia The Handmaid's Tale:

At some point in the weeks that followed the 2016 presidential election, Hulu executives recognized that American voters had handed them a once-in-a-lifetime marketing opportunity. They nearly doubled the budget ahead of the Handmaid's premiere, a move said to push it above $10 million, and bought a Super Bowl ad at the going rate of $5 million. At the last minute, they added an overtime buy for a second spot — like that would ever happen. Then it did, with the New England Patriots recovering from a 25-point deficit to tie the game. The two Handmaid's ads were seen by some 111 million viewers. Within days, Atwood's novel was topping the Amazon best-seller list. Recalls head of content Craig Erwich: "Sometimes the universe sends you a signal, and that was definitely a signal."

With the January 2017 Women's March still fresh in the nation's consciousness, Hulu dropped the first three episodes on April 26. The New York Times praised the show as "unflinching, vital and scary as hell." While everyone had been focusing on Netflix and Amazon's battle for streaming dominance, Hulu had launched a sneak attack. Overnight, it became an Emmy contender.

Forget Jurassic Park, it's time for Pleistocene Park. That's the vision of Harvard geneticist George Church, who has been experimenting with recreating an actual Wooly Mammoth by combining DNA from one of the long dead creatures found frozen in Siberia with material from modern elephants. A scientific paper said to be weeks away will the outline method. “We are focusing on reviving mammoth genes and making a mammoth/elephant hybrid and (helping) them spread to vast wild, arctic climates," Church says. What could possibly go wrong?