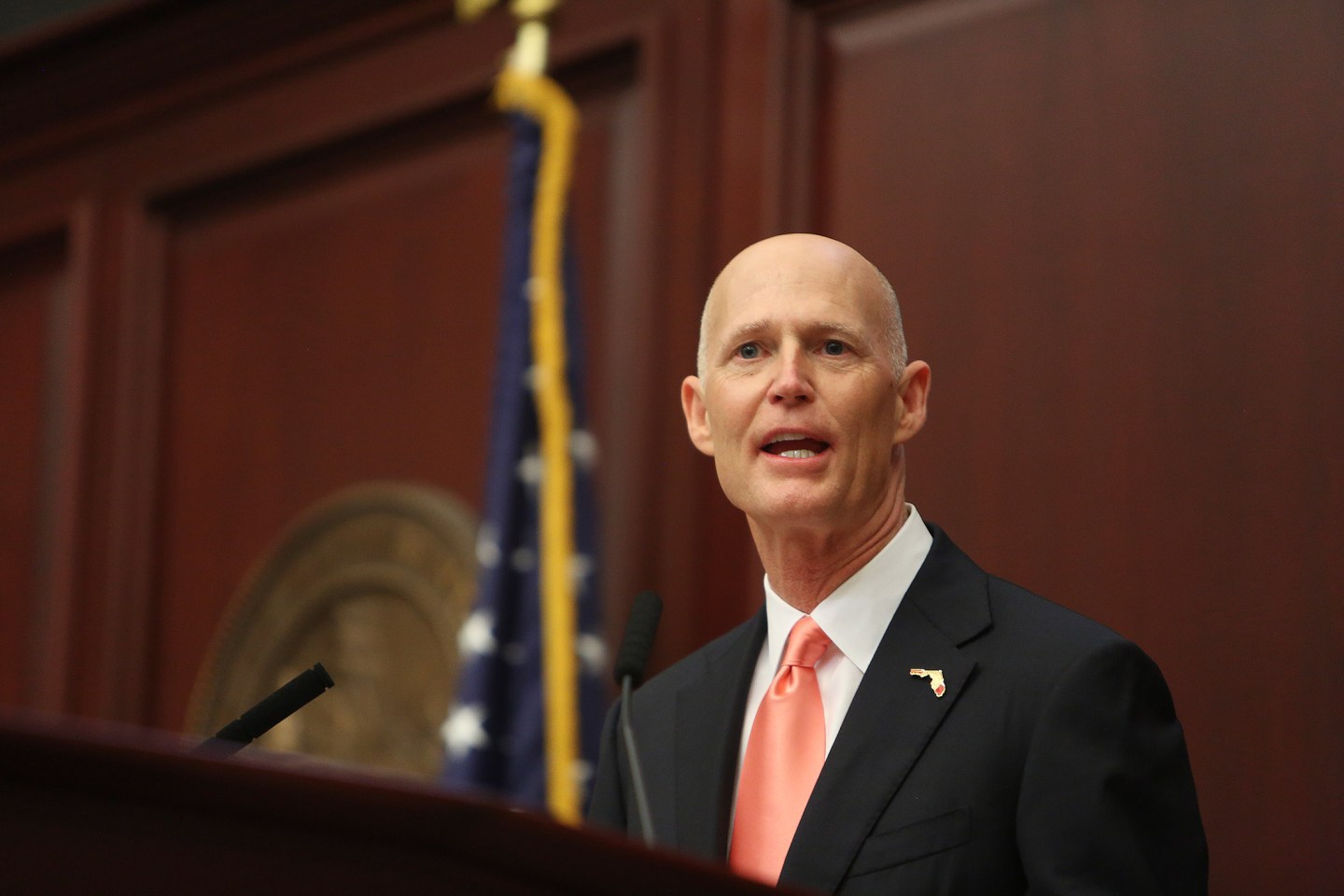 Florida Gov. Rick Scott addresses a joint session of the Florida Legislature, Tuesday, March 3, 2015 during his State of the State address in the Florida House of Representatives. (AP Photo/Tampa Bay Times, Scott Keeler) TAMPA OUT; CITRUS COUNTY OUT; PORT CHARLOTTE OUT; BROOKSVILLE HERNANDO TODAY OUT
Photograph by Scott Keeler — AP

When Florida Gov. Rick Scott announced he will run against Democratic Sen. Bill Nelson Monday, he set off a race that experts say will likely become one of the most expensive campaigns in U.S. history.

The two-term Republican governor, who announcement was widely expected, has told donors that he needs to raise more than $110 million to mount an effective run against Nelson in both the primary and general elections, according to a source familiar with these conversations. If he raises that much, it would make the race among the most expensive in 2018.

Some observers say it could even become the most expensive in history.

“I’d be surprised if it wasn’t,” said Terry Sullivan, a Republican political strategist who managed Marco Rubio’s presidential campaign in 2016 and subsequently worked on his Senate race that year.

In the 2016 election cycle, the average winning Senate candidate had spent $10.4 million through October 19 of that year, according to the Center for Responsive Politics. But in Florida, the third most expensive race that cycle after Pennsylvania and Wisconsin, Rubio, who faced off against Patrick Murphy, had spent over $21 million, and Murphy had spent over $19 million.

This is not surprising, given the fact that Florida has 10 media markets, including high-priced ones such as Miami, Orlando and Tampa. Nelson, a three-term incumbent, had raised $10.2 million by the end of last December, according to filings from the Federal Election Commission. During his last reelection in 2012, he raised $13.4 million.

But all of those numbers are only fractions of Scott’s reported fundraising and spending goals, per the donor who had spoken with Scott. Scott’s campaign did not immediately respond to a request for comment about how much money had been raised so far. But as of 2016, Scott, who was a hospital executive before launching a bid for Governor, had a net worth of nearly $150 million, according to his public financial disclosure forms, and he used funds from his personal fortune on his gubernatorial elections in 2010 and 2014.

“Part of why he’s so viable is his ability to fund a top tier, expensive U.S. Senate campaign,” said Sullivan. “Its a terrible cycle for Republicans and its gonna take a popular governor with a huge open checkbook to be able to pull this off. Its gonna be tough, though.”

Scott’s candidacy is a bright spot for Republicans in a year where Democratic enthusiasm is expected to be overwhelming, as evidenced by the recent wave of recent Democratic victories in special elections in Alabama and Pennsylvania. But while history may also be on the Democrats’ side – the party in power often loses Congressional seats after a President’s first two years in office, even when that President is not as controversial as the current occupant – they actually face a very difficult Senate map. Democrats are defending 26 seats, including two independents who caucus with them, while Republicans are only defending eight. Ten of those seats – including Nelson’s – are in states President Trump won in 2016.

After Scott’s announcement, the non-partisan Cook Political report moved the race to “toss up,” further putting the Democrats on the defensive. And Sullivan noted that Democrats will need to put up their own money, possibly diverting resources from other contested races.

“Rick Scott is going to need unprecedented campaign cash to try to cover up for all his self-serving work as Governor but every campaign dollar he spends just reminds voters how he’s taken advantage of his job to enrich himself and his donors. It’s a catch-22,” Jesse Ferguson, a Democratic strategist who previously worked for Hillary Clinton’s presidential campaign and the Democratic Congressional Campaign Committee, wrote in an e-mail to Fortune.