Welcome to Insider Trading Paradise Where No One Worries About Jail 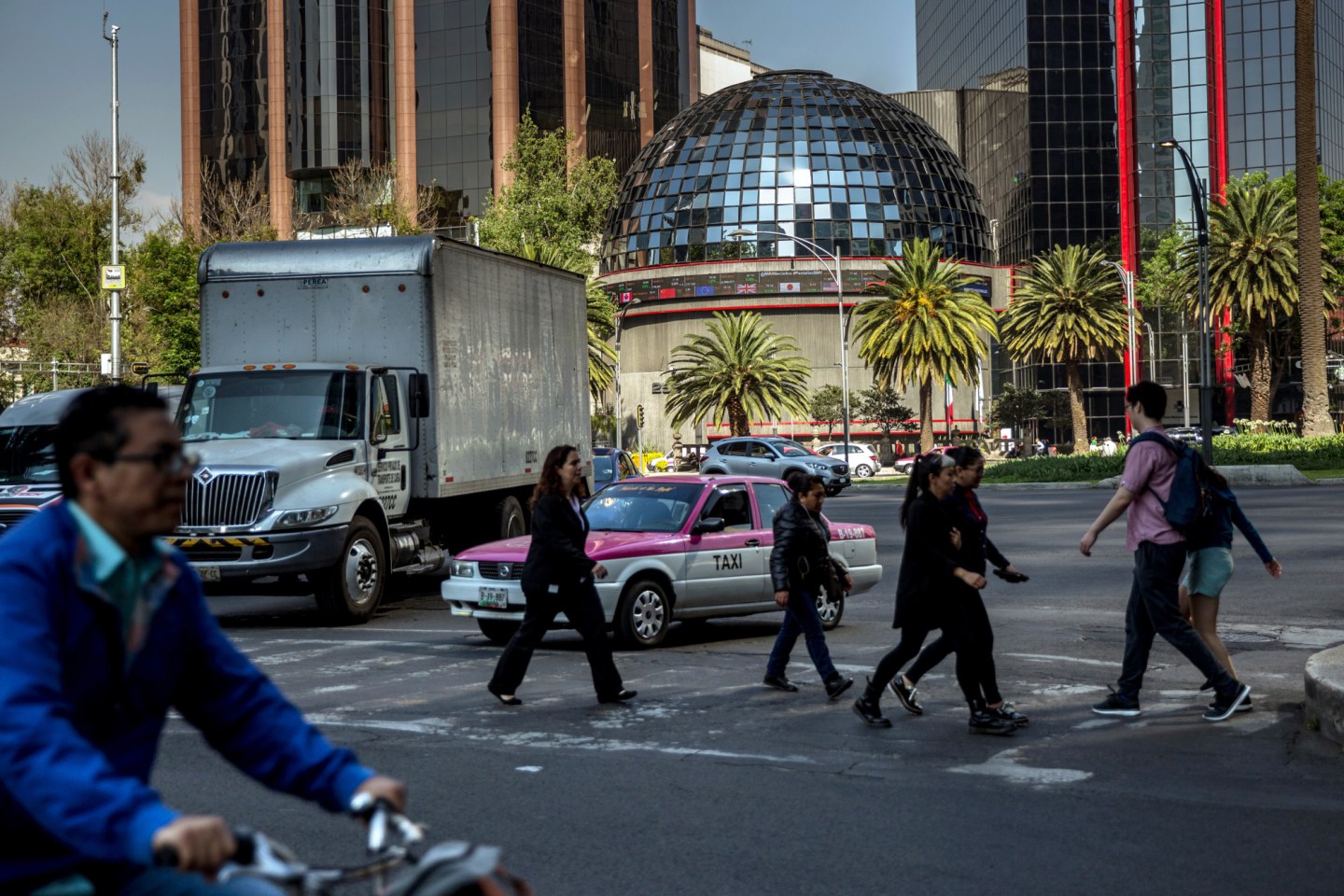 A stock plunges just before bad news hits, or soars ahead of a bullish headline. On Wall Street, that sounds like it could be insider trading. In Mexico, it’s more like business as usual.

Insider trading is rife in the $400 billion Mexican stock market — and almost everyone knows it. As in the U.S., trading on non-public information is illegal. Mexico’s financial regulator has been making penalties public only since 2008, and just 28 people have been punished since then. It takes an average of more than five years for the agency to issue penalties for insider dealing. No one has been criminally charged or gone to prison, and while U.S. punishment can run into the tens of millions of dollars, fines in Mexico have added up to a mere $60,000 per perpetrator. The Mexican regulator said it only acts based on its constitutional authority and declined to comment on whether it does enough to stem insider trading.

Unusual stock movement is a constant subject of chatter in Mexico. A recent series of dubious activity has traders, investors and lawyers saying privately that the authorities should investigate, but few are willing to speak openly for fear of being ostracized. In the run-up to Mexico’s July 1 presidential vote, corruption and impunity for wrongdoers has been a big campaign issue.

In Mexico, stocks tend not to fluctuate when companies announce quarterly earnings, said John Griffin, a professor at the University of Texas at Austin who’s studied the timing of stock-price movements in 56 countries. “The most likely explanation is because there’s rampant insider trading,” he said. “When the earnings news comes out, it isn’t special because people have already incorporated it.”

If Griffin is right, and judging by the dearth of penalties, the watchdog only catches a fraction of what goes on.

Mexico’s oversight of capital markets rules is lax even by the standards of other Latin American countries. Argentina is investigating potential insider trading from last month. Brazil has sent at least one perpetrator to prison. In 2015, Chile fined one businessman more than twice what Mexico has levied in its public history. Only Colombia arguably has a worse reputation, and its stock market is one-third the size of Mexico’s. Maria Nieves Lanzagorta, spokeswoman for the the Comision Nacional Bancaria y de Valores, the Mexican regulator, wouldn’t comment on what goes on in other countries.

Observers said the CNBV lacks technology and staff to keep an eye peeled for rigging. Some matters that could be investigated:

On March 1, 2017, Desarrolladora Homex SAB shares fell almost 10 percent to a record low amid a dearth of news about the company. The explanation came 48 hours later, when the Securities and Exchange Commission revealed it was suspending U.S. trading in the homebuilder due to an alleged $3.3 billion accounting fraud. Losses deepened. Vania Fueyo, Homex’s investor relations director, wouldn’t comment beyond a statement sent to the exchange saying the slide was due to “market conditions.” The stock market rose the most in more than a month that day. Homex settled with the SEC without admitting or denying the allegations. The trading suspension has been lifted. The stock of construction company OHL Mexico SAB rose as much as 5.2 percent on June 14, outperforming the benchmark stock index’s 0.5 percent rise. Soon after the market closed, OHL said in a filing that it had received a take-private offer. An OHL spokesman had no comment on the price move before the announcement. On Sept. 27, shares of Alfa SAB, a $6 billion industrial conglomerate, declined to the lowest in weeks. Fourteen minutes after the market closed, Alfa said it decided not to pursue an initial public offering of Sigma, one of its units. The next day, Alfa shares sank the most among stocks in Mexico. Alfa spokesman Luis Ochoa said the drop in shares wasn’t unusual and that the CNBV hasn’t asked it for information about the day’s trading. Ienova, the Mexican unit of Sempra Energy, slumped 3.9 percent on Oct. 4, the biggest decline in about a year. Two days later, the company said in a filing that it had agreed to pay $520 million to buy state-backed Pemex’s 25 percent stake in a pipeline. Shares declined for six days. A Ienova spokesperson said the company has no reason to believe pre-announcement trading was unusual. The company said it hasn’t been informed of any investigation by the CNBV. Shares of lender Grupo Financiero Banorte SAB lost as much as 8.9 percent on Oct. 25 before the company said in a statement it had agreed to buy rival Grupo Financiero Interacciones. Francisco Rodriguez Daniel, a Banorte spokesman, said shares moved before the company announced the deal because a local publication had published the sale information based on rumors. Banorte “follows the best corporate practices” and is committed to continuing to do so, the company said. Between 11:49 a.m. and 11:50 a.m. on Nov. 6, shares of Unifin Financiera fell 0.6 percent. Ten minutes later, the financial services company sent a filing to the stock exchange saying it planned to ask shareholders to vote on a follow-on offering. Shares fell the most in a year. David Pernas, Unifin’s investor relations officer, said the company’s shares tend to be volatile.The CNBV said unusual trading activity isn’t necessarily evidence of insider trading or anything illegal.

At least nine of the executives penalized recently for insider trading continue to work at or sit on the boards of publicly traded companies.

In January, the CNBV fined Ramon Leal, Alfa’s chief financial officer, $10,000 for violating insider-trading rules more than six years ago. Leal continued as Alfa’s CFO. After Bloomberg reported the fine, the company said he’d be leaving on March 31. Leal hasn’t publicly denied or admitted guilt, but records show he paid the fine. Alfa said in a March 9 statement that the decision for him to leave was mutual and stemmed from the penalty.

Bloomberg reported last week that the CNBV fined two men who’ve worked as directors at Latin America’s second-biggest Coca-Cola bottler, Arca Continental SAB. The penalties, for a total of less than $10,000, were punishment for trading on privileged information in 2010 and 2011, according to the watchdog. One of the men, Juan Hawach, still works at the company and the other, Baldomero Ponce, is an alternate board director, the company said in a statement in response to questions. The two men can appeal the fines. Efforts to reach them were unsuccessful.

In two memorable cases, the U.S. government meted out penalties for high-flying investors that dwarfed anything Mexico has issued. In 2011, after billionaire hedge fund manager Raj Rajaratnam was found guilty of insider trading, he was sentenced to 11 years in prison and fined more than $150 million.

Two years later, SAC Capital Advisors, a Stamford, Connecticut-based group of hedge funds created by billionaire Steven A. Cohen, pleaded guilty to insider trading and paid a total of $1.8 billion in penalties. Though Cohen was never charged, eight of his traders were found guilty. The firm closed in 2016.

Mexico’s CNBV, after facing criticism for its soft approach to enforcement, stepped up its punishments last year. It dealt the most fines for insider trading it ever has: 25 million pesos ($1.3 million) to 15 people. The watchdog has imposed eight fines, for less than $20,000 in total, for insider dealing since December, when Bloomberg started asking questions about investigations.

“I think that was them trying to show that they’re watching,” said Jose Berrueta, a Mexico City-based partner at Ritch Mueller.

Those in charge of surveillance at the CNBV complain privately they don’t have the necessary tools or enough employees to monitor the market, according to a person who’s heard the conversations. Less than 8 percent of the regulator’s staff focuses on securities-market activities, and the CNBV has struggled to retain experienced workers because wages have stagnated for more than a decade, according to a November 2016 International Monetary Fund assessment report.

Federico Parenti, a Milan-based fund manager for Base Investments Sicav, said that corruption and a laissez-faire regulatory environment are deeply ingrained elements of markets in developing countries that probably won’t change.

“Put yourself in the Mexican regulator’s shoes. Say you find fraud at a company” owned by a powerful family, said Parenti, who helps manage about $650 million. “Do you really want to step on the wrong people’s feet? I don’t think you’d put yourself or your colleagues at risk.”