‘Going Into the Lion’s Cage.’ Only 14 Women in the World Lead Commodity Houses 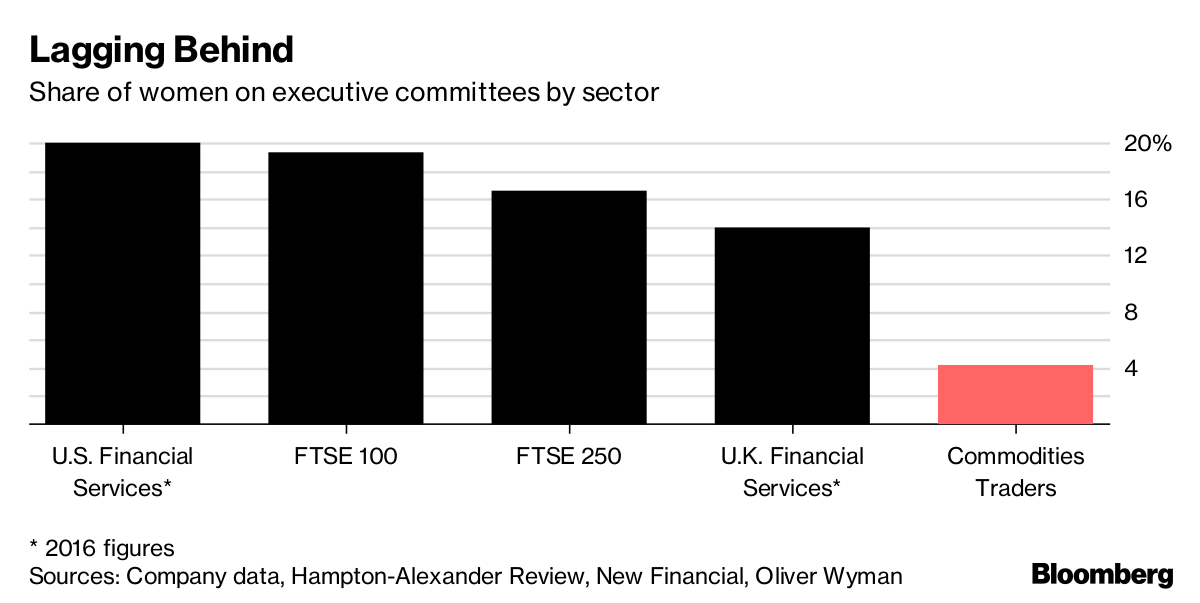 In the top echelons of leadership at the world’s biggest commodity traders, less than 5 percent are women.

It’s a statistic that shows gender inequality in a $2 trillion business that buys, sells and transports everything from oil to sugar to copper, supplying the global economy with raw materials. Some of the industry’s titans — Glencore Plc, Vitol Group and Trafigura Group — have no women in senior executive roles.

“Commodities trading desks can be very intimidating places if you are a woman,” said Roxana Mohammadian-Molina, a former commodities strategist at an investment bank who spent 10 years in the sector and now works for peer-to-peer lending platform Blend Network. “The set of survival skills needed is similar to that of a lion tamer going into the lion’s cage.”

In the past year, the world’s business and political leaders have faced a reckoning as the #MeToo movement and U.K. pay gap data point the spotlight on widespread gender discrimination.

The disparity between men and women in leadership at commodities traders is wider than most American financial institutions and U.K. blue-chip companies. But like other businesses, the reasons are complex.

The business culture hasn’t evolved much in recent decades and there’s little support for flexible working. Multimillion dollar deals are often made with a handshake after late-night dinner and drinks in hotel bars. One leading metals trader holds an annual party at London’s Playboy Club.

Related industries such as oil and mining have also struggled to attract women. Many of the biggest trading houses are also privately held, so they face less scrutiny from investors and media.

“This is something that needs to change,” said Marco Dunand, chief executive officer at Mercuria Energy Group in Geneva. “The problem is how do you attract more women to trading? It enriches your company to have more females. I look at it from a value perspective.”

Mercuria has a relatively high proportion of women. They account for four of the 12 positions among top leadership.

Bloomberg News tracked the number of men and women on the executive committees at 40 of the biggest traders of energy, metals and agriculture. The statistics are based on data from annual reports, regulatory filings, corporate websites and interviews.

Glencore said 40 percent of its trading business staff are women, and declined to provide further information. Vitol and Trafigura declined to comment.

At Louis Dreyfus Co., the 23 executives that run day-to-day operations are all male. The agriculture trader is the only one among the majors that’s controlled by a woman, billionaire chairwoman Margarita Louis-Dreyfus.

The company said it’s taking steps to increase diversity and inclusion. “We recognize the positive benefits that this can have on business performance and culture,” Louis Dreyfus said in a statement.

Three companies — Mercuria, Archer-Daniels-Midland Co. and Cargill Inc. — account for more than half the women in senior positions.

There are two women on the 21-person team of top leadership at ADM. The company said it has increased female hires in its U.S. trading unit by 30 percent in the last three years.

Cargill has two women and seven men on its top executive committee. “We have to support and elevate women — and all underrepresented U.S. minorities — at every level of the organization,” said Demetha Sanders, who leads inclusion and diversity at the Minneapolis-based trading house.

The gender difference also shows up in paychecks. At the U.K. trading division of Royal Dutch Shell Plc, the average bonus paid to women was 62 percent less than men. That compares with a 28 percent gap for the rest of Shell’s British operations.

Overall bonus pay for women working at BP Plc was 64 percent less than men. The company does not break out separate data for the trading unit.

“We also have roles such as trading where pay is weighted heavily towards performance bonuses,” BP said in a 2017 report. “These roles are predominantly performed by men, contributing to the bonus gap.”

Claire Tomlin, who worked as a fuel oil trader at Shell in the 1990s, said there are other reasons for the gender gap, such as badly planned provision for maternity cover and a lack of networking opportunities. Historically, fewer women have studied subjects like engineering that funnel people toward the oil industry.

“We haven’t reached a critical mass of women in the industry, we’re not there yet,” said Tomlin, who is now a managing director at commodities headhunting firm Clarion Search. “Once we get there, working practices will change.”