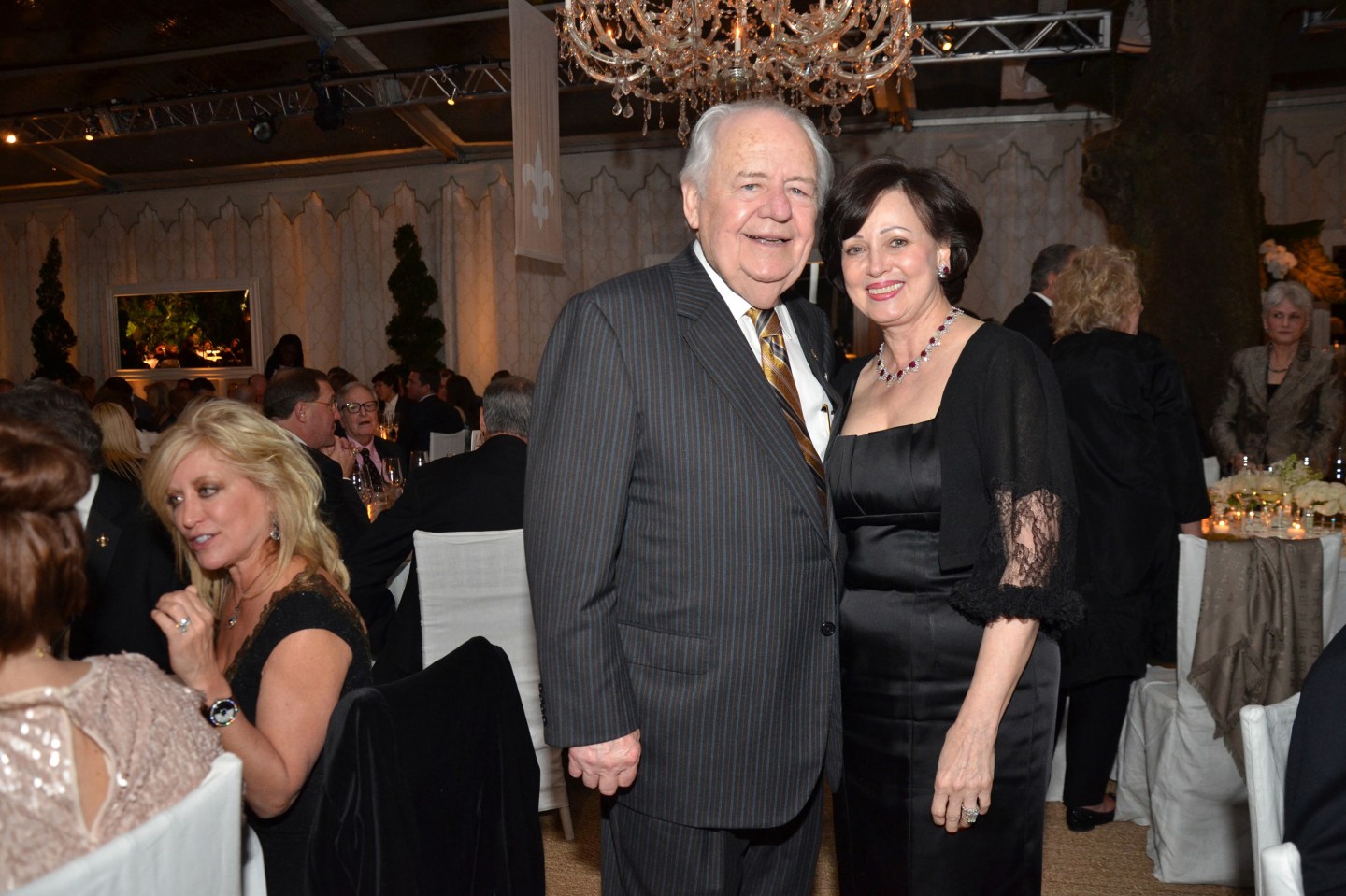 Tom and Gayle Benson, owners of NFL team the New Orleans Saints, pose for a portrait during a party they hosted for NFL team owners in New Orleans, Louisiana, U.S., on Thursday, Jan. 31. 2013. The party in City Park kicked off a weekend of festivities before Super Bowl XLVII. Photographer: Amanda Gordon/Bloomberg via Getty Images
Amanda Gordon—Bloomberg via Getty Images

He died on Thursday at Ochsner Medical Center in Jefferson, Louisiana, outside New Orleans, according to the Saints website. He entered the hospital on Feb. 16 with the flu.

Benson built his net worth of about $1.7 billion through automobile dealerships, banking concerns and real estate. At its peak, his automotive empire encompassed 27 dealerships in Texas, Louisiana and South Carolina, according to a biography on the websites of some of his dealerships. He sold brands including Mercedes-Benz, Honda and Chevrolet.

His other holdings included San Antonio-based Lone Star Capital Bank and New Orleans television station WVUE-TV. In 1996, he sold Benson Financial Corp., a collection of banks located in the southern U.S., to Norwest Corp. for $78 million in stock.

In 1985 he led the group that paid about $70 million to buy the Saints from founding owner John Mecom Jr., who was weighing whether to move the franchise. Benson became sole owner in 1992.

The high point of his tenure came in February 2010, when the Saints defeated the Indianapolis Colts in the Super Bowl for the franchise’s first title since its founding in 1967. The victory, which came almost five years after Hurricane Katrina devastated New Orleans, was a milestone in the city’s recovery.

As a Mercedes-Benz dealer, Benson helped drive the talks that led Mercedes-Benz USA in 2011 to buy naming rights to the Saints’ home, the Superdome in New Orleans.

He was known earlier in his tenure for a dance, nicknamed the Benson Boogie, he would do on the field to celebrate victories.

In 2012, Benson purchased professional basketball’s New Orleans-based team, then called the Hornets, for about $338 million from the National Basketball Association, which had taken temporary custodianship of the team in 2010. The team adopted the name Pelicans in 2013, after Louisiana’s state bird, the Brown Pelican.

Thomas Milton Benson Jr. was born on July 12, 1927, in New Orleans to Thomas and Carmelite Benson and raised near the city’s historic French Quarter.

He cut short his studies at Loyola University New Orleans to join the U.S. Navy during World War II, serving on the USS South Dakota, a battleship, during preparations for an invasion of Japan that never came to pass. After the war, he went to work. Loyola gave him an honorary degree in 1987.

At 19, he joined the accounting division of Cathey Chevrolet in New Orleans. After eight years of work, he was asked to take over an ailing dealership in San Antonio, according to a 1987 Los Angeles Times profile. He became the owner of that dealership, which he called Tom Benson Chevrolet. Others followed.

In 1966 he borrowed $1 million to buy 25 acres in north San Antonio, betting correctly that it was next in line for a spurt of commercial growth.