How to Make Money During Miami’s Record $3.5 Billion Art Bazaar 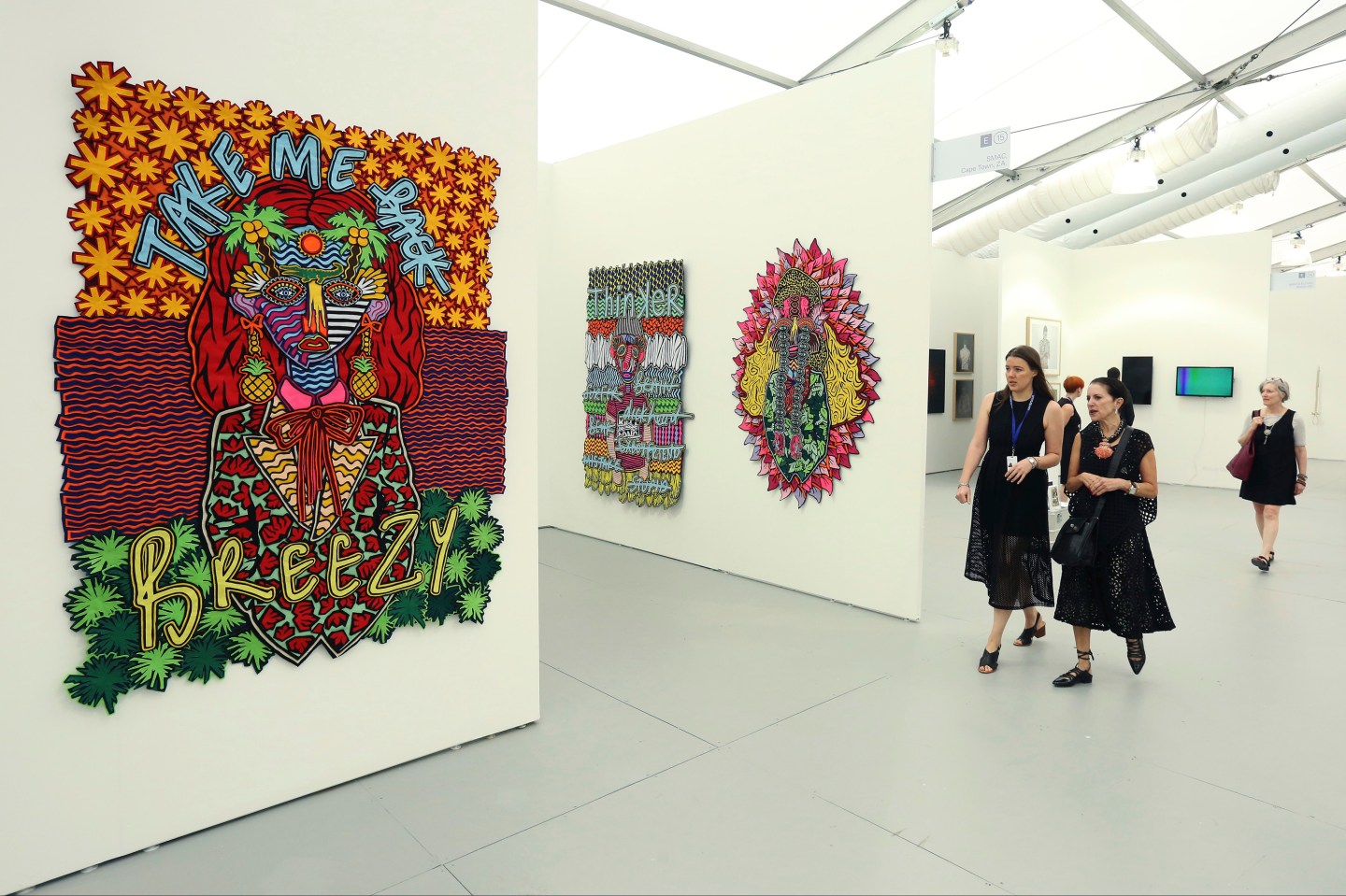 Collector Dennis Scholl never heard of McArthur Binion when he spotted his grid paintings at Art Basel Miami Beach three years ago. He liked them so much that he bought one on the spot for $38,000 — then got his friends to buy 10 more. “I said to my friends: ‘This is a layup,”’ Scholl said in a recent interview. “The work was so brilliant and it was undiscovered. The minute I saw it, I knew I had to have it.”

New works by Binion, 71, priced as high as $150,000, will be among the highlights of the 16th edition of the largest contemporary art fair in the U.S. when it opens to guests Wednesday. Investors are more aware than ever of the profits that can be made from art after watching a Da Vinci purchased for $127.5 million in 2013 rocket to an unprecedented $450 million at auction last month.

But spotting a winner can be difficult amid thousands of pieces shown by 268 galleries from 32 countries at the sprawling Miami Beach Convention Center. This year, the 237,000-square-foot space will have a record $3.5 billion of insured works on display, according to AXA Art. The VIP preview, known as the art world’s Black Friday, is usually mobbed by millionaires, billionaires and celebrities such as Leonardo DiCaprio and Jay-Z.

Having a game plan is essential.

First, do your homework. In the days leading up to the opening, galleries send lists of available works to clients. Screening these previews helps shoppers devise “a clear road map of which booth to visit at the beginning of the fair,” and ultimately “secure access to some of the most desirable works,” said collector and entrepreneur Eugenio Re Rebaudengo.

Then, arrive early. The opening moments have been compared to the running of the bulls in Spain, because throngs of VIPs line up to enter at the gate at 11 a.m. and then stampede to their booths of choice.

Look outside the box. Galleries often reserve the most desirable works for certain clients or even sell them before the fair. One work-around is to find out which galleries handle an artist in other countries and see if they have any available pieces, said art adviser Wendy Cromwell.

Scholl, the Miami-based collector who’s seen a 300 percent increase in value for his Binion painting, typically starts with a lap around the perimeter — occupied by younger galleries and those presenting lesser-known historic works — where he often finds “brilliant surprises,” he said.

Preparation can lead to quick financial gains. One adviser snapped up a $3.9 million Keith Haring painting at the fair last year after seeing it in the preview materials. Five months later, the work was flipped for $6.5 million at Sotheby’s, breaking the auction record for the late Pop artist. Caution: This strategy can ruin a collector’s relationship with a gallery.

Taking a long-term view has been a successful approach for collectors over the years. One of the priciest works at the fair is Willem de Kooning’s “Untitled VII” offered at $35 million at Richard Gray Gallery. The owner bought the piece in 1980, a year after it was made, for $100,000 and it stayed in the collection since.

Winning strategies also include finding artists who are “very, very young” or historic works that “have been undervalued by the market,” said Todd Levin, who advises collectors.

In 2013, a collector bought an 8-foot-tall black canvas by emerging artist Adam Pendleton for $45,000 during the VIP preview. Last month, a painting of the same size from the same series fetched $225,000 at Christie’s. A new painting by the 33-year-old will be offered by Pace Gallery for $55,000 this week at Art Basel.

Emerging art can be risky as an investment, said Jorge Perez, the billionaire Miami real estate developer and art patron. He often buys works by rising artists, especially from Latin America — though he never sells. On Monday, Perez snapped up a large triptych by Peruvian artist Claudia Coca for $25,000 at Pinta, one of the many satellite fairs anchored by Art Basel Miami Beach, to install in one of his residential buildings.

“You don’t know if in 10 years she’s going to be considered a great artist or not,” Perez said. “And the younger they are, the less experienced and exposed they are. The less museums and curators have been collecting them. The more of a risk you take.”

Toyin Ojih Odutola, the 32-year-old Nigerian native with a current solo show at the Whitney, is seeing surging demand. More than 100 people are waiting for Odutola’s available work, said dealer Jack Shainman, who represents her. A human-size pastel and charcoal on paper at the fair sold for $40,000 before it even got there. When the gallery began working with Odutola six years ago, her prices started at $1,200.

Black artists are catching the eye of those searching for long-overlooked works.

Gerald Williams, a septuagenarian who co-founded the radical AfriCOBRA art movement in the late 1960s, will be at the fair to enjoy his first solo exhibition in 20 years, at Kavi Gupta gallery’s booth. Williams is included in the acclaimed U.K. museum exhibition “Soul of a Nation: Art in the Age of Black Power” that travels to the U.S. next year. Prices range from $15,000 to $90,000.

“We are already selling to museums,” Gupta said.