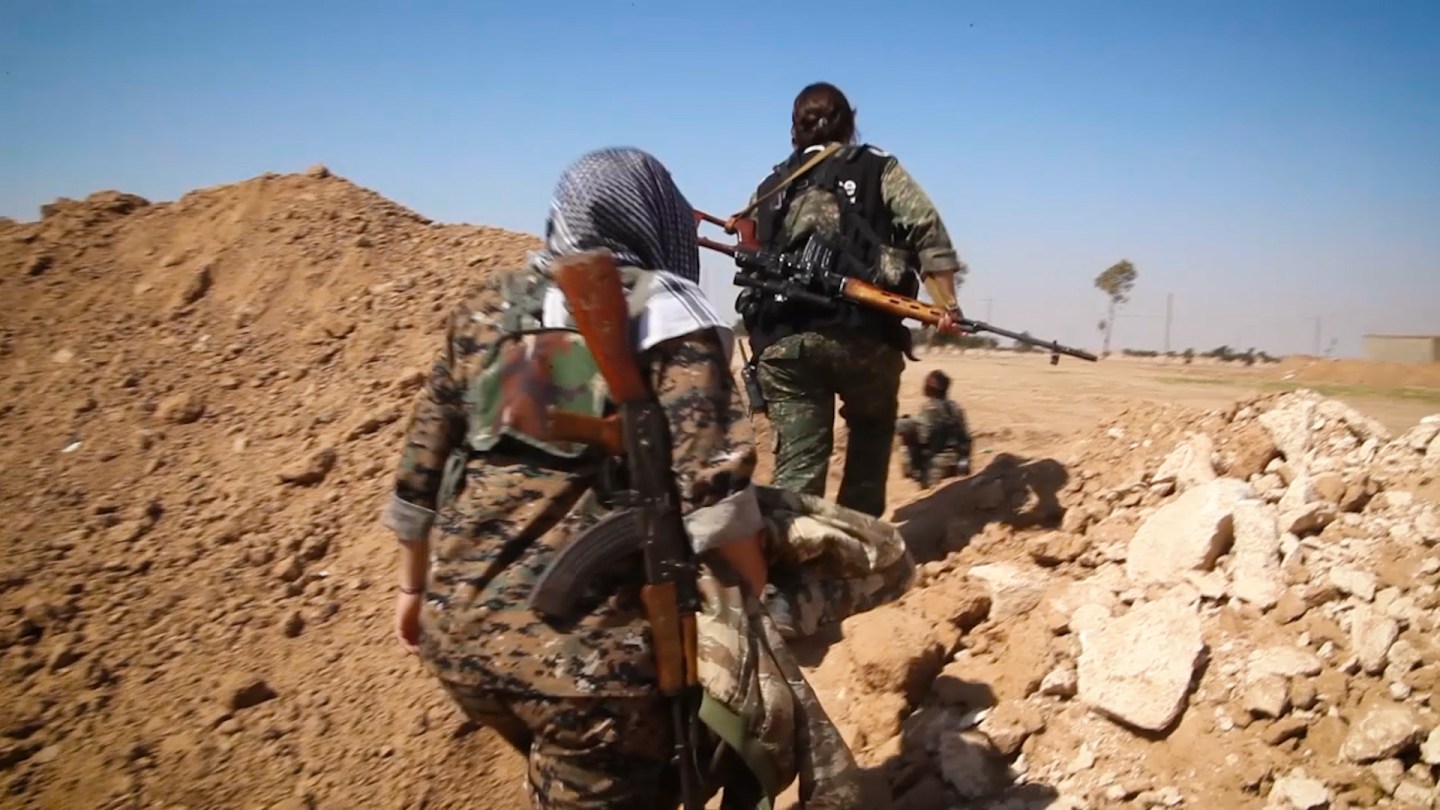 *** EXCLUSIVE - VIDEO AVAILABLE *** SYRIA - MARCH/APRIL 2017: Kimberley and another YPJ fighter with guns on their backs in Syria, April-March 2017. A BRITISH woman has explained why she is risking her life to fight ISIS in Syria. Kimberley Taylor, originally from Blackburn, is with the Womens Protection Units, or YPJ, fighting ISIS in its unofficial Syrian capital Raqqa, in the north of the country. The 27-year-old is believed to be the first female Brit to have travelled to Syria to fight against ISIS. PHOTOGRAPH BY Deniz / Barcroft Images London-T:+44 207 033 1031 E:hello@barcroftmedia.com - New York-T:+1 212 796 2458 E:hello@barcroftusa.com - New Delhi-T:+91 11 4053 2429 E:hello@barcroftindia.com www.barcroftmedia.com (Photo credit should read Deniz / Barcroft Images / Barcroft Media via Getty Images)
Deniz / Barcroft Images / Barcroft Media via Getty Images

Her philosophy is partly spelled out on her arm, in a tattooed poem that reads in English and Arabic. “They don’t deserve to live in my world.”

Hanna Bohman left her life in Vancouver, British Columbia in 2014 and joined the Yekîneyên Parastina Gel (YPG) women’s militia of the Kurdish People’s Defense Unit, better known as the YPJ. She has spent the better part of three years on two tours of duty in Syria, as part of a fighting force aiming to eliminate the scourge of Isis in one small town after another. “People find it weird, I know,” she says. “I wanted to make a difference.”

I had the opportunity to spend part of an afternoon with Bohman recently as she prepared to screen Fear Us Women, a new documentary featuring her story at the Women In Entertainment Conference in Los Angeles. The short documentary is a production of RYOT Films, Academy Award-nominated director David Darg and executive producer Olivia Wilde.

“This is really all about something bigger,” Bohman says. “Right now, there are 10,000 women fighting life-or-death battles. But it’s also about the liberation of women in the Middle East. They’re trying to dismantle a thousand years of patriarchy.”

The film will be available online on November 9th, on Go90.

Only 27 minutes long, it’s a gritty look at the horrors of Isis and the wrenching politics of the region – she’s no fan of Turkey’s President Recep Tayyip Erdoğan, for example. But it excels as a matter-of-fact look at the experiences of the often unlikely soldiers who come together for the cause. “I didn’t know a lot of girls before,” she says in the film, looking askance at some young women who were dancing during some down time in camp. “We eat in the dirt, we sleep in the dirt, we do everything in the dirt,” she says of the grim boredom of guard duty.

After volunteering for the YPJ, Bohman was smuggled over the border into Syria, and thrown into the deep end. She expected a five-day boot camp. “It was about four hours of training,” she says. “Luckily I knew how to shoot a gun.”

A confluence of events led the former part-time model and store clerk to leave her Western life and take up arms against a force she calls the “Satanic State.” One was a near-death experience on her motorcycle. “I was thinking about my life, and giving back,” she said. “We build our lives out of opportunity.” Then, horrified by a video she’d seen about Isis, she became incensed at the inaction of governments. She also wondered why, if people could volunteer to fight with them, why there wasn’t an opportunity to fight against them. “Turns out there was.”

While there is no trailer for the film online, I would point you to Bohman’s video diaries, which make up a good portion of the documentary.

In this clip, we find Bohman explaining with an almost unsettling good humor one of the most important battles in her military career. It was the retaking of a big town near the Turkish border called Til Abyad, that had been held by Daesh for nearly a year. “Isis has a huge flag there,” she says to her camera, then laughs. “And we’re attacking them with six of us.”

This attack came after the brutal siege on nearby Kobanê, which while successful, killed 741 of her YPJ sisters. (She explores the wreckage of Kobane here.) At Til Abyad, she’s the only woman available to fight.

In this subsequent video, she explains that the group of six soldiers had grown to a band of twenty, who had been joined by some members of the Free Syrian Army. They were awaiting for airstrikes to finish the job. “We’re going to spend the night here on the dirt on the hill,” she says with soldiers from Croatia and Kurdistan.

It’s a big cognitive and physical leap from Vancouver to Syria. But Bohman tells me, “I’m just wired to fight, I guess.” She talks about the things she’s seen – the aftermath of torture and rape, the decimation of people and cultures that Isis has caused, the many combatants she’s dispatched without a second thought. “Isis believes that if they’re killed by women, they go to hell,” says the trained sniper who is happy to send them there. “I don’t see them as human anymore.”

But the YPJ doesn’t stop their work when Isis retreats, and this is what matters now, she says. The women soldiers have earned the respect of the grateful communities they liberate. “They’re setting up councils and democratic forms of local government,” where women have a seat at the table. From what she’s seeing, the changes seem to be taking. “And that’s a revolution,” says Bohman. “That’s the story.”

Ellen McGirt is a Fortune senior editor and writes raceAhead, a daily newsletter about race and culture.