Commentary: What Guy Fawkes Night Can Teach Us About the Abuse of Power 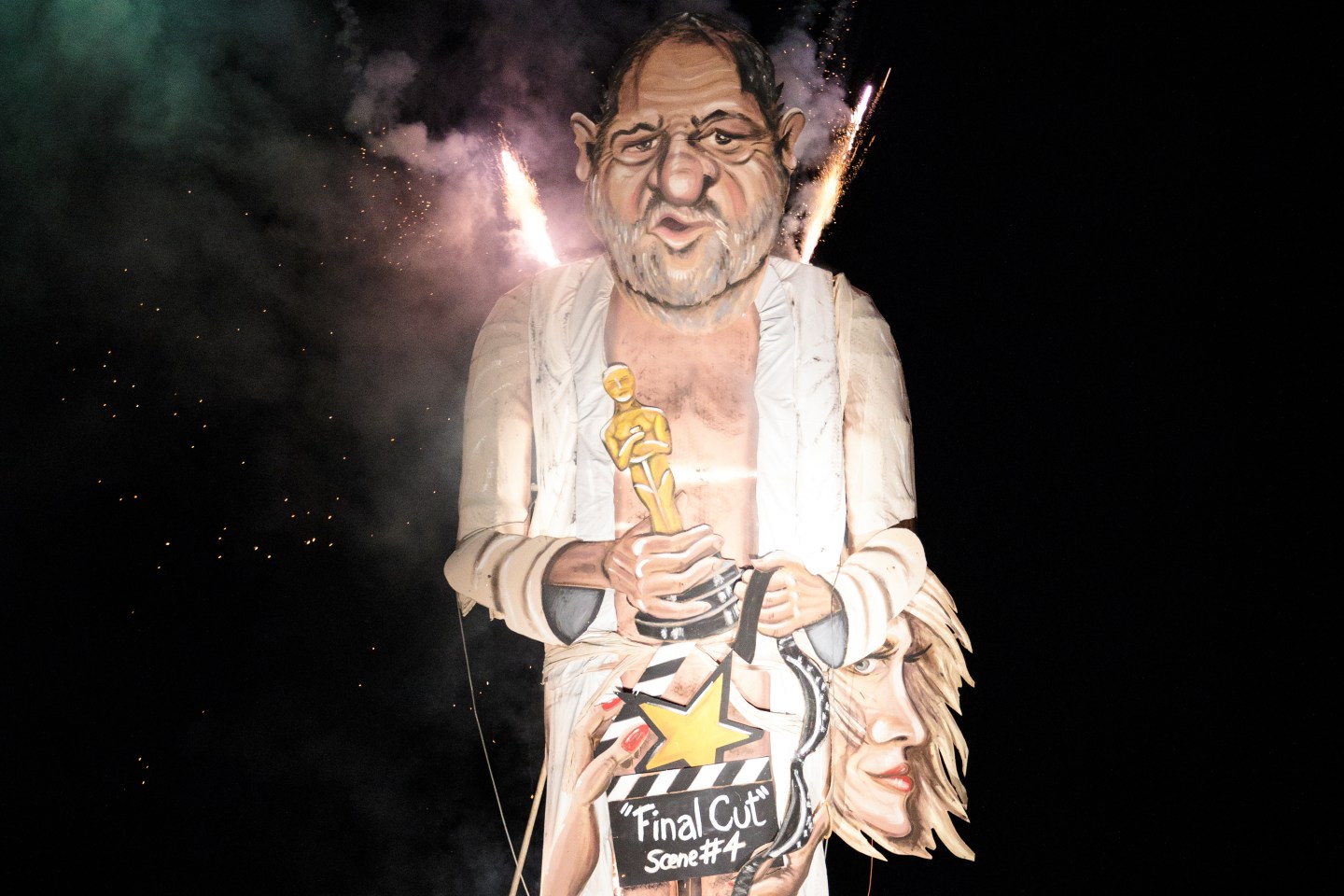 EDENBRIDGE, ENGLAND - NOVEMBER 04: An effigy of film producer Harvey Weinstein is burned during a fireworks display at Edenbridge Bonfire Night on November 4, 2017 in Edenbridge, England. Each year the Edenbridge Bonfire Society creates a 'Celebrity Guy' effigy of an infamous public figure which is burnt during the annual bonfire night celebrations. (Photo by Jack Taylor/Getty Images)
Jack Taylor — Getty Images

Every November 5th, Britons celebrate Guy Fawkes Night with fireworks displays and the burning of his effigy on a bonfire. The day even has its own anthem, a rhyme committed to every British schoolchild’s memory:

Remember, remember, the Fifth of November,

I see no reason why Gunpowder Treason

Should ever be forgot.

Yet with the acceleration of history—what French historian Pierre Nora calls “the slippage of the present into a historical past that is gone for good”—few today remember the details behind this mnemonic refrain.

The “Gunpowder, Treason and Plot” that enjoins our memory was a failed attempt by Roman Catholic activists more than 400 years ago on November 5, 1605 to blow up the Palace of Westminster with 36 barrels of gunpowder smuggled into a cellar of the House of Lords on the opening of Parliament.

A group of 13 plotters resolved to assassinate the absolutist King James and his ministers to spark a rebellion and restore a Catholic to the crown. Ringleader Robert Catesby recruited explosive expert Guy “Guido” Fawkes to ignite the fuse and then escape across the Thames. The plot was foiled when Fawkes was discovered by a group of guards shortly after midnight and convicted of high treason. That night, bonfires were lit in England and a day of celebration declared for the king’s escape.

The plot is ripe for reenactment, and it is no surprise that entertainment giant HBO picked up BBC’s Gunpowder, a restaging of Guy Fawkes’s 17th-century plot staring Game of Thrones’ Kit Harington, a descendent of none other than Robert Catesby.

It is also unsurprising that the effigy pick for this year’s Edenbridge Bonfire Society’s “celebrity guy” is the infamous Harvey Weinstein, following last year’s spectacular choice of then presidential hopeful Donald Trump.

The celebration of the fifth has changed over the centuries with its fading remembrance. Within years of the failed plot, Britons mounted effigies atop bonfires, usually of Guy Fawkes himself. Between 1606 and 1859, Guy Fawkes Day was commemorated as a national day of thanksgiving and a joyful deliverance from the “great danger of Popish powder.” After 1673, the year James II went public as Catholic, it was customary to burn a surrogated pope as effigy. Over time, the effigy on the bonfire evolved to include any “guy” in the likeness of Fawkes, often made by children out of clothes, stuffing, and a mask.

The burning of effigies on Bonfire Night is a modern reenactment of a triumphant body politic expunging its enemies through festive celebration. Yet contemporary restaging of Fawkes’s effigy as an unpopular public figure creates a satirical gap between the literal and expected: It is not Fawkes the Catholic freedom fighter who is “immortalized and immolated,” but those in power who encroach upon the people’s freedom.

By what political magic has Bonfire Night transformed a cultural performance that reinstates the authority of those in power to a set of unauthorized performances that disrupt that authority?

The transformation is not so unlikely when we consider that unauthorized cultural performance was always part of the 17th-century history of Guy Fawkes. After the Gunpowder Plot, the Popish Recusants Act of 1605 and the Oath of Allegiance of 1606 made it treason to obey the authority of Rome rather than the king. By swearing allegiance to the monarch, subjects produced the law through corporeal embodiment. The function of these laws was performative: to produce routines of words and gestures to secure the memory of a body politic. Along with oath taking, the burning of the effigy of Guy Fawkes is one such social performance, a contractual reenactment zone for law that required obedience to one’s monarch.

Yet some did not obey, evidenced by the long trajectory of refusals to take the oath and ensuing popish uprisings. These embodiments produced an alternative, testing the limits of the law. An array of behaviors flourishes in what critic Joseph Roach calls the “penumbra of the law.” These “hidden transcripts” record displaced transgression against official culture’s legitimacy.

Such arts of political disguise are practiced in the reenactment of Weinstein as Fawkes’s effigy. The burning of an effigy surrogates the violence practiced on an absent victim by eliminating in public his monstrous double. In the case of Weinstein, the comforting fiction of his elimination as waste or sacrificial expenditure both sustains the community with the soothing fiction that borders exist, and disturbs it with the spectacle of their immolation.

The monstrous specter Weinstein’s effigy asks us to remember is not gunpowder treason, but another hidden transcript: the cultural memory of pervasive, yet unreported sexual assault by those in power.

Accused at this point by over 50 women of sexual harassment or assault and facing arrest for rape allegations in New York and London, the fantasy of Weinstein’s sacrificial elimination comforts us with the implication that those who commit sexual violence will be discovered. Yet it troubles us with its spectacular display of offenses that include not just Weinstein’s, but a host of Hollywood power players accused of sexual misconduct.

Fawkes’s Gunpowder Plot and the rituals of Bonfire Night are not isolated historical events, but potent cultural fables for securing and resisting authority.

Remember, remember, the refrain now urges, the transcripts of sexual violence not yet disclosed, the scale of which we have yet to imagine. Recent disclosures and the #metoo campaign add to this cultural repertoire of subversive performances against abuses of power that will never be forgot.

Alysia E. Garrison is assistant professor in the Department of English at Dartmouth College.