Is Ripple for Real? A Closer Look at the Company Behind the Third Most Valuable Digital Currency 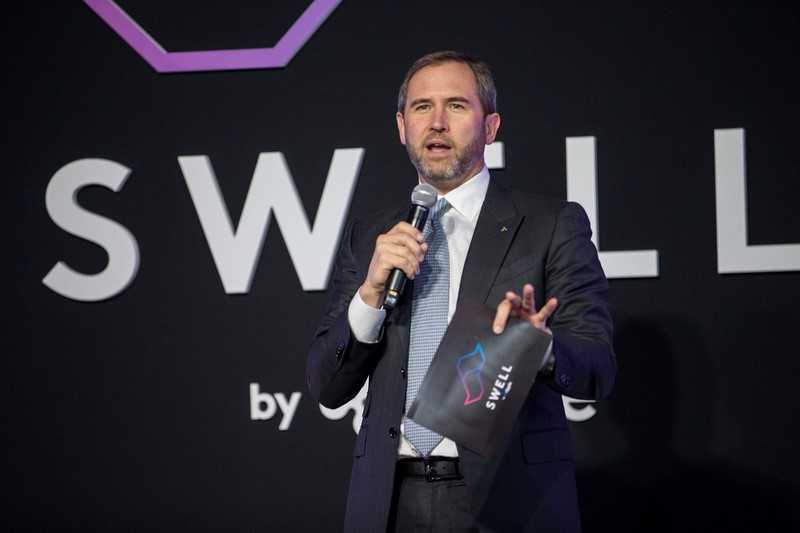 Brad Garlinghouse is feeling good. The CEO of Ripple just brought the likes of Ben Bernanke and crypto-wunderkind Vitalik Buterin to a buzzy conference in Toronto, and his company is growing fast.

As of this month, Ripple has licensed its blockchain technology to over 100 banks while its digital currency, XRP, now has a market cap of nearly $8 billion* according to Coinmarketcap—third behind the digital money giants, bitcoin and Ethereum.

Fortune’s The Ledger caught up with Garlinghouse to find out where all this is going, including how Ripple plans to deploy its bulging reserves of XRP, which he describes as a “strategic weapon.”

You can read our Q&A below, but the important takeaways include: the XRP hoard is integral to Ripple’s business strategy; Ripple is making money (though its profits for now depend in part on selling that XRP); Garlinghouse believes big digital currencies will have a peaceful coexistence.

There’s also some stuff on how banks are using XRP, and on whether Garlinghouse worries central banks will replace digital currencies with tokens of their own. (Spoiler: he’s not too worried.)

Here’s the conversation, which has been edited for brevity and clarity:

The Ledger: How does Ripple and XRP compare to other blockchains?

Brad Garlinghouse: For a period of time, Ripple wasn’t mainstream blockchain because because we weren’t bitcoin. We took a rather contrarian view at the time that we’re not anti-bank, we’re not anti-government, we’re not anti-fiat currency. For a while that took conviction to stay the course in the face of the more libertarian elements of crypto.

In 2017, people have realized there isn’t going to be one crypto to rule them all. You’re seeing vertical solutions where XRP is focused on payment problems, Ethereum is focused on smart contacts, and increasingly bitcoin is a store of value. Those aren’t competitive. In fact, I want bitcoin and Ethereum to be successful.

Why do banks need XRP?

It’s about liquidity. If you have a utility like XRP that has a real value proposition. The liquidity needs of banks today is managed with literally ten trillion of float that sits in these nostro and vostro accounts. We believe very strongly this is an inefficient model. You can use digital assets to fund liquidity, and Ripple is uniquely positioned to capitalize on that. Bitcoin takes four hours to settle a transaction. XRP takes 3.6 seconds.

Explain how Ripple will distribute XRPs to banks.

The Ripple Net Accelerator program is designed to allocate up to $300 million to create incentives to accelerate adoption. It’s not dissimilar to the early days of Visa. The rough idea is “we’ll pay you Mr. Bank or Mrs. Bank to accelerate your use of this program. We’ll pay you in XRP.” If they don’t want XRP, they have an option to use US dollars.

To date we haven’t supplied any XRP. That’s not entirely true. We did an experiment 18 months ago. We gave a very small amount of XRP to a dozen banks to demonstrate the multilateral nature of XRP. It’s our vision of solving a liquidity problem for banks.

I’m not going to give it to them. It’s an incentive if X, Y, and Z happens.

How does Ripple’s pricing model work?

The price depends on the size of banks and the number of transactions the bank intends to use Ripple for. These are big commitments. We’re not talking about 10 seat licenses from Salesforce that might cost a few thousand a year. You can add at least another zero.

Does the prospect of Central Banks introducing their own tokens keep you up at night?

No. We’ve had the good fortune to speak to dozens of central banks around the world. I don’t think central banks are going to give up fiat currency anytime in my lifetime.

What does a fed token really mean? Look at this piece of paper [holds up a $20 bill]—that’s already tokenized—it’s a unique $20 bill with a serial number on it. What does that mean you’re taking that bill and tokenizing it? I don’t know exactly what means. I hear people talk about it but I don’t know.

It’s been nearly a year since you became CEO. How’s your relationship with Ripple’s two co-founders?

Chris [Larsen] is 100% involved in the company. He’s the chair and I talk to him everyday. Chris’s vision for an internet of value is very much still the vision. I don’t really have a relationship with Jed [McCaleb] of any consequence. I’ve met Jed a bunch of times and I’m aware of what [his company] Stellar is up to, but that’s about it.

Is Ripple making money? How much of that comes from selling XRP?

Suffice to say we’re cash flow positive and that give us the ability to invest in a way that’s good for the eco-sytem and our company. Absolutely, we harvest some of the XRP. It’s very important for us to be very transparent in XRP markets so every quarter we publish a report that specifies how much we sold in the open market and to institutional buyers.

No, we wouldn’t be cash-flow positive without the XRP sales. It goes back to the fact XRP is a strategic weapon to invest in the ecosystem. It gives us flexibility to hire the best engineers in the world and to invest in the platform and the technology.

What do people fail to understand about Ripple?

The thing I think is often misunderstood about Ripple is people say “oh, Ripple is a centralized platform.” To me this is a legacy perspective. Ripple’s technology, IRP, is open source, XRP Ledger is open source.

If Ripple as a company went away, XRP would continue to trade. To me that’s the definition of decentralization. The price might go down because Ripple as a central player in the XRP eco-system invests in what’s good but I think there continues to be misunderstanding of centralization and decentralization. Though now that I’ve said all that I’m not sure Fortune readers give a shit—it’s more a technical thing.

Ripple has a grand vision of enabling an internet of value. For us, it’s how to catalyze that vision and connecting the repositories of value—those repositories are the banks. Those who in the crypto community who view them as the enemy are an obstacle to their success.

*Ripple says its market cap is actually $18.8B since the Coinmarketcap only counts circulating, not total, supply.