A Chastened Angela Merkel Braces for a Coalition Tussle 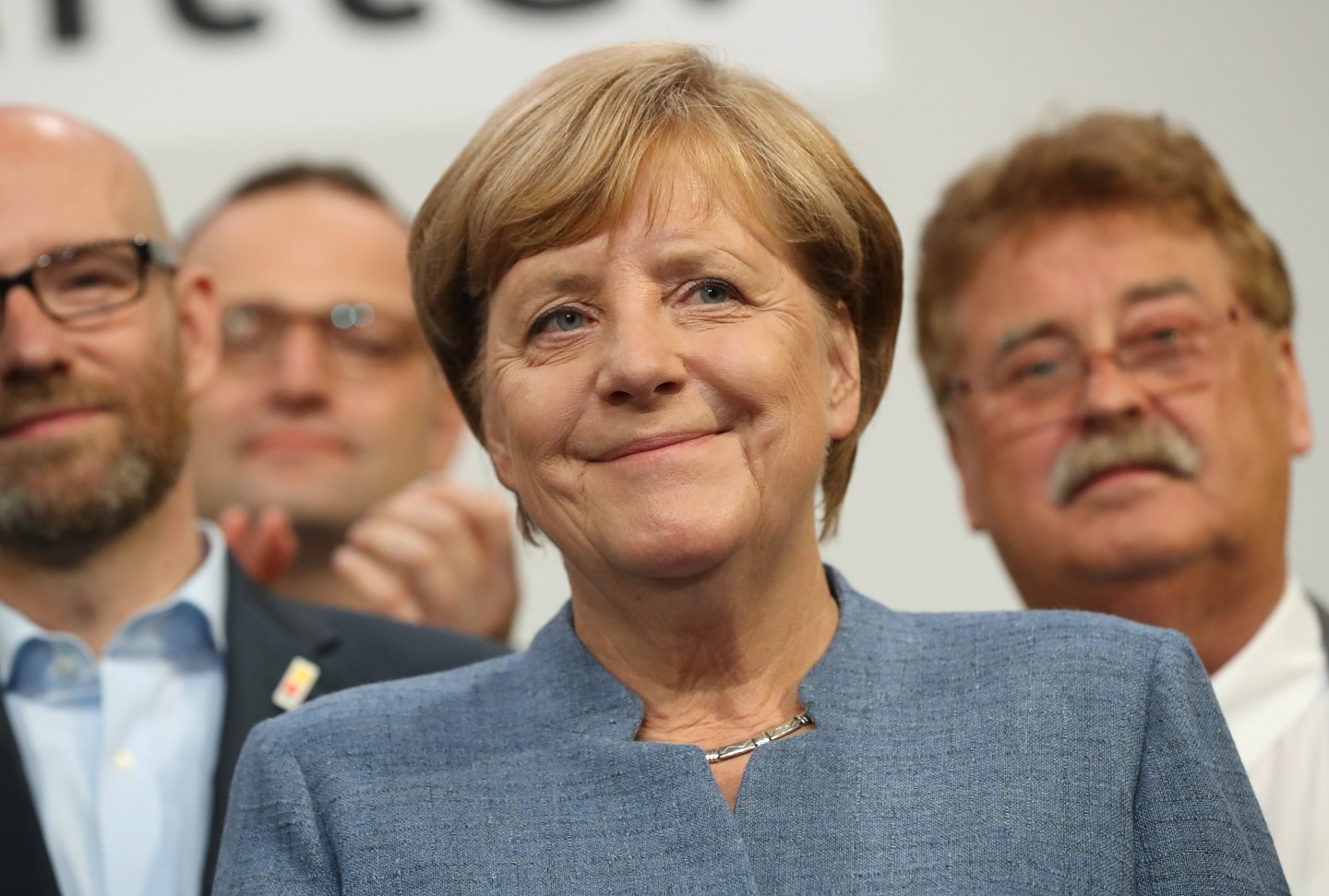 BERLIN, GERMANY - SEPTEMBER 24: German Chancellor and Christian Democrat (CDU) Angela Merkel smiles while thanking supporters at CDU headquarters at the end of the election evening following federal elections results that give the CDU 33% of the vote, giving it a first place finish, though 8.5% less than in the last election four years ago, on September 24, 2017 in Berlin, Germany. Chancellor Merkel is seeking a fourth term and coming weeks will likely be dominated by negotiations between parties over the next coalition government. The right-wing Alterniative for Germany (AfD) finished in the third place with a better-than-expected 13.2%. (Photo by Sean Gallup/Getty Images)
Sean Gallup—Getty Images

Germany’s Angela Merkel turns to the task of sounding out partners to build a coalition government after securing a fourth term as chancellor in Sunday’s election although she was weakened by a surge in support for the far right.

Damaged by her handling of the 2015 migrant crisis, Merkel’s conservative bloc took 33% of the vote, down 8.5 points from the 2013 election and hitting its lowest level since 1949.

The German establishment was shocked as conservative voters flocked to the anti-immigration Alternative for Germany (AfD), which took 12.6% of the vote. It was the first time a far-right party has entered the German parliament in more than half a century.

However, Merkel’s party is still the biggest parliamentary bloc and Europe’s most powerful leader said her conservatives would set about building the next government, adding she was sure a coalition would be agreed by Christmas.

“There cannot be a coalition government built against us,” she said.

However, a weaker Merkel at the head of a potentially unstable coalition with the pro-business Free Democrats (FDP) and Greens, untested at national level, unsettled investors.

The euro slipped in early Asian trading on Monday trading down 0.2% at $1.1930, with the prospect looming of months of uncertainty in Europe’s biggest economy.

“Earthquake, warning, landslide, shock. This election can only be described with such drastic vocabulary. It was an anti-Merkel election which ended as a pro-Merkel election,” said Germany’s Handelsblatt business daily.

Some business leaders were alarmed, saying a party likened by the foreign minister to Nazis could hurt Germany.

“The AfD in the German Bundestag (parliament) is damaging our country,” employers’ association BDA leader Ingo Kramer said. “The other parties now have the task of cornering the AfD in direct parliamentary debate.”

One of the AfD’s leading candidates, Alexander Gauland, gave a foretaste of what was to come, vowing to “hound” Merkel and “get our country and our people back”.

“Our companies need clear signals. Now it’s all about averting damage to Germany as a place of business,” Dieter Kempf, president of the BDI industry association, said.

After her current Social Democrat (SPD) coalition partner said it would go into opposition after slumping to a post-war low of 20.5%, Merkel’s main option is to pursue a three-way partnership.

A “Jamaica” alliance of her conservative bloc, the FDP, on 10.7%, and the Greens, on 8.9%, could be fragile due to fundamental differences on issues from migrants to tax, the environment and Europe.

In particular, the prospect of Merkel sharing power with the FDP is likely to create problems for deeper integration of the euro zone as proposed by French President Emmanuel Macron.