How Indochino Makes a Custom Fit Suit for Under $500 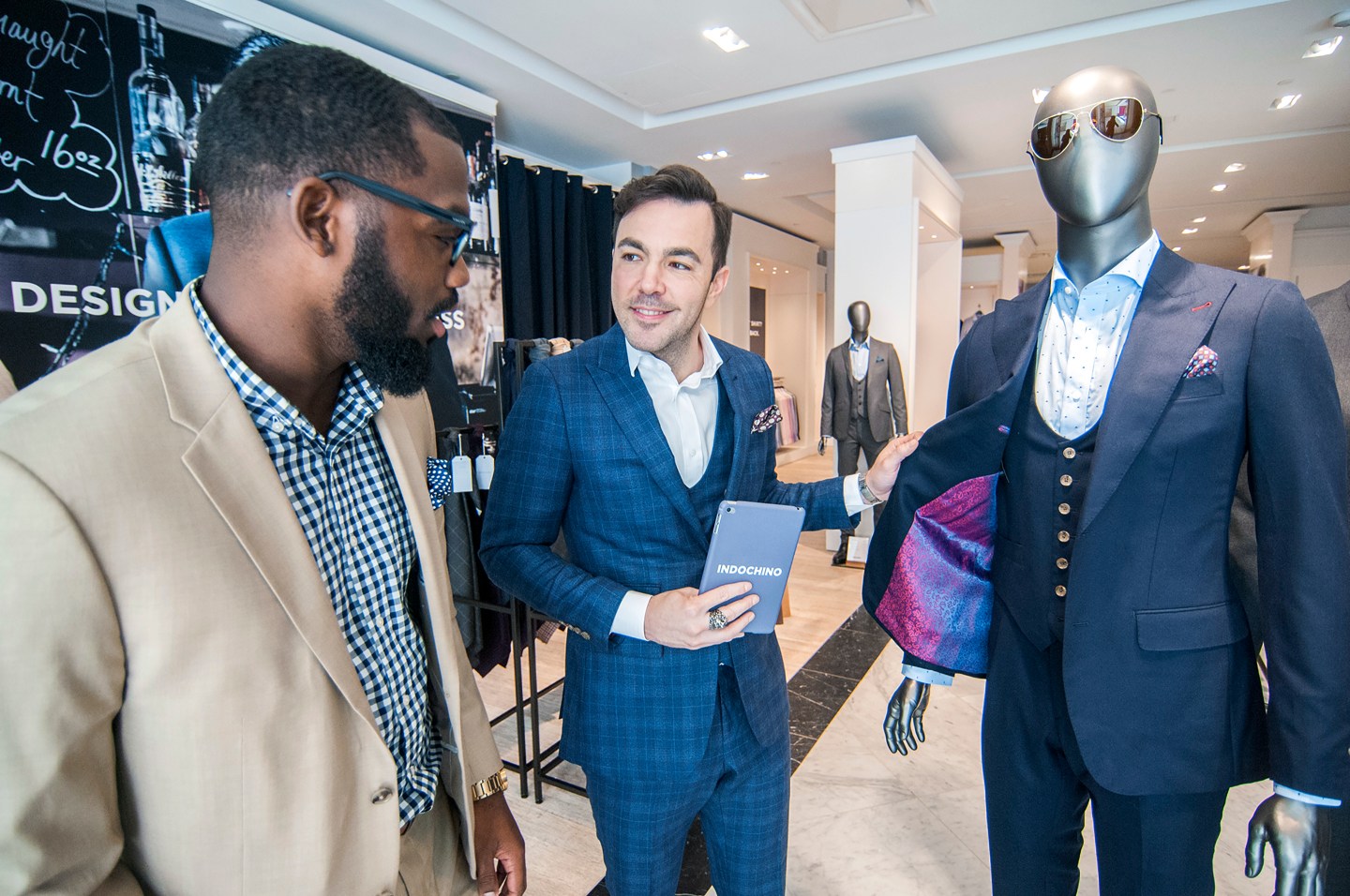 An employee assists a customer at Indochino’s new showroom in King of Prussia, Pa.
Courtesy of Indochino

Bespoke suiting once brought to mind cigar smoke and burnished mahogany, and a gray-haired tailor with a measuring tape around his neck and a pin in his mouth. No longer. The past few years have seen a boom in online businesses peddling made-to-measure men’s suits at off-the-rack prices, as the Average (nattily dressed) Joe has shifted from revering luxury labels to building out his own brand. “It’s the desire to not look like one of a million but one in a million,” says Marshal Cohen, chief retail analyst at market research firm NPD Group.

One company on the crest of this wave is Indochino, a Vancouver-based firm founded in 2007 by Kyle Vucko and Heikal Gani, former University of Victoria students who hated shopping for formal clothing.

Here’s how ordering a suit online works: Customers follow step-by-step video guides on how to take their own measurements in less than 10 minutes. (No tape measure? They sell one for a dollar—it ships for free.) Sartorially inclined shoppers can then customize details like lapels, linings, pocket placement, and monograms. The cost starts at around $400 a suit (lower for fabrics that are on sale), and the finished garment arrives via FedEx within four weeks, promising a better fit than anything found on the racks of a department store.

Last year, Indochino raised $30 million in new funding from Dayang Group—the China-based manufacturer that makes its clothing as well as garments for Ralph Lauren (RL), J. Crew, and Banana Republic—and it has used some of that cash to increase its footprint offline. “We needed to get away from selling a product and move toward selling an experience,” says Drew Green, who stepped in as Indochino’s CEO in 2015. On his watch, Indochino has opened 17 showrooms in the U.S. and Canada and tripled the size of its business. “Retail has given us our No. 1 channel of new customer acquisition,” Green says.

Related: Inside the Trunk Club Mansion

Green operates under the assumption that while the average guy is loath to try on piles of starched wool-blend in a ­fluorescent-lit dressing room, he may not want to fork over a few hundred dollars for something he’s never seen in real life, either. Indochino’s showrooms bridge that gap. A shopper can make an appointment for a free, hour-long consultation with a “style guide” who will measure and walk him through fabrics, fit, and some of the myriad options for customization.

Founded in 2000 in Amsterdam, Suitsupply edged into the American market in 2011, when the Wall Street Journal pitted a $614 Suitsupply outfit against a $3,625 Armani suit and called it a draw. Suitsupply’s getups start at $499 and can be customized online or at their rapidly expanding fleet of showrooms (the U.S. currently has 27, with seven more locations set to open soon).

With just three showrooms, J.Hilburn, founded in 2007, relies mostly on a nationwide network of personal stylist consultants who meet shoppers, at no charge, to measure them and figure out how their clothes should fit. J.Hilburn’s suits start at $660, and most fabrics come from tiny Italian mills.

Launched in 2009, Blank Label intended to cater to artsy hipsters who didn’t want to wear clothes from the usual suspects. The company’s tailored shirts and suit separates quickly caught on with mainstream shoppers, and within a year, Blank Label’s revenue was in the six figures. Blank Label has five retail locations; suits start at $750.

On a recent afternoon at Indo­chino’s showroom in Beverly Hills, one block from Rodeo Drive, a style guide hovered around a
middle-aged man trying on a made-to-measure charcoal-gray suit (customers have the option of a fitting once the garment is made). Bolts of fabric line silver racks throughout the shop, a physical manifestation of Indochino’s edge over more traditional suit slingers. “It’s a virtual inventory model,” says Green. “We can open a showroom without spending hundreds of thousands of dollars on inventory, at a fraction of the cost at which our competition opens their stores. That’s provided a really efficient way to grow.”

Another growth opportunity: weddings. Wedding wear is Indochino’s fastest-expanding ­segment (retail rivals like Macy’s (M) are also looking to wedding wear for growth), and the second floor of the Beverly Hills showroom is ­designed to play host to grooms and their parties, with mannequins in trendy tuxedos—a white jacket with black leather sneakers—cushy armchairs, and a foosball table. “The groomsmen usually bring a beverage of their choice,” says Shayna Green, the showroom manager. (Indochino offers complimentary water and coffee, not the hard stuff.) It helps that 65% of Indochino’s customers are millennials, a demographic that happens to be attending a lot of weddings. “Millennials really want to connect with the products that they buy,” says Drew Green. “We give them the chance to create their own brand, the chance to express themselves.”

Related: This Is What You Get When You Spend $1,500 on a Pair of Jeans

Indochino has expanded into custom shirting, blazers, and, last year, outerwear. But suits represent the bulk of the business, and Green is focused on meeting that demand before wandering too far into other categories. His goal is for the Beverly Hills outpost of Indochino to have as strong a pull as the designer shops that flank it. “We don’t consider our competitors retailers that sell made-to-measure or bespoke,” he says. “Our competitors are those that sell ready-to-wear.” According to Cohen, Indochino and its ilk have their work cut out for them. He estimates that the entire bespoke-suiting business represents less than 1% of the $50 billion menswear market in the U.S. “The issue for them isn’t that they have a good transaction and interaction with the consumer,” he says. “The issue is the frequency of purchase. The younger generation isn’t buying suits at an alarmingly fast rate.” Bespoke T-shirts, anyone?

A version of this article appears in the Sept. 15, 2017 issue of Fortune with the headline “Made to Measure.”