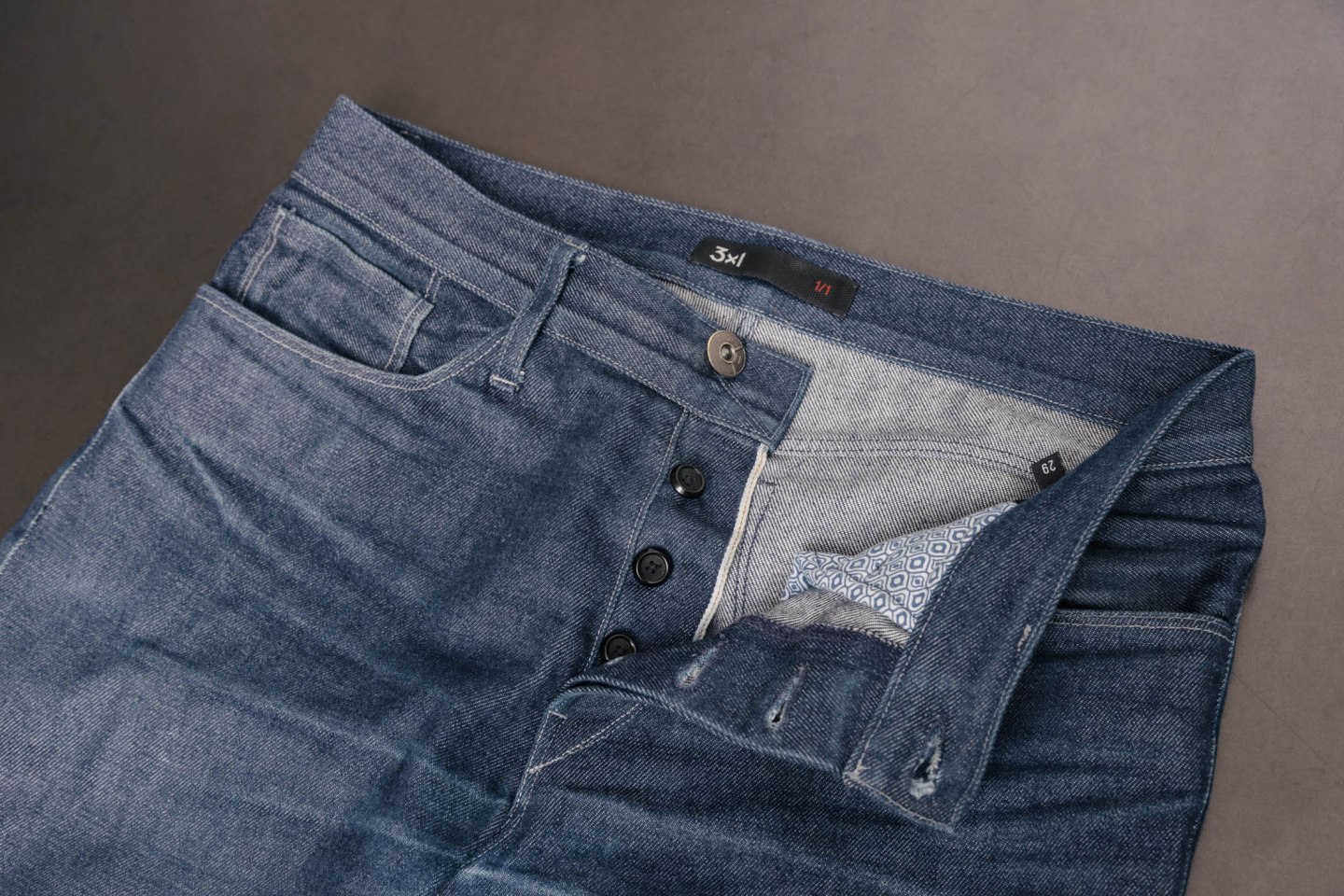 What does $1,500 get you in blue jeans? One answer is 44 pairs of Wranglers. Another option: four or five pairs of raw denim—a rigid, rugged, unrinsed jean for true connoisseurs—from Pure Blue Japan, Samurai, or any of the other excellent brands frequently hailed on Reddit’s /rawdenim subthread. A third, for a sophisticated rich-brat look, gets you a single reworked pair of Levi’s, with asymmetrical cuffs, from Parisian design collective Vetements.

But if you believe that your 15 Benjamins entitle you to completely personalized perfection, you’ll want an appointment at Manhattan’s 3×1, reputed to offer the best best tailor-made denim in the world. Though the word bespoke has been misused and degraded, it legitimately applies to the custom work done at the company’s SoHo premises.

“Bespoke is typically for harder-to-fit guys, or people who have something really specific in mind,” says 3×1 founder Scott Morrison, who launched the company in 2011, following the entrepreneurial successes of Paper Denim & Cloth and Earnest Sewn. For my part, I arrived at Morrison’s Mercer Street sales floor bearing a reference garment: a pair of raw jeans purchased (a million or so years ago) at a Freemans Sporting Club sample sale.

Back then, my jeans were as crisp as the bolts of new denim I found hanging on 3×1’s wall. Now, they were deeply marked by decent whiskering and honeycombs—jargon for the types of fades that some hard-core denim-heads pursue by putting off washing jeans. Mine had been worn often enough that it was time to consider retiring them.

“The first thing we talk about is: What are you looking for in a jean?” Morrison said.

I replied that I was looking for the same jeans—but better. Morrison gauged them with a tape measure and photographed me in them, a prelude to digital rendering. We then talked about the fit: I wanted them slightly looser in the top block and maybe an added bit of tapering below the knee. Then the discussion gave way to a point-by-point discussion of particulars. Did I want to change the pocket opening? How did I feel about the back pockets?

Morrison felt that the back pockets appeared a touch out of proportion—“This doesn’t look bad; it’s just a little bit, like big,” he said—and proceeded to softly but firmly recommend adjusting them. In much the same way, he recommended lengthening the rear rise by a fraction of an inch. His tone indicated that this wasn’t really a recommendation, more the casual statement of an obvious fact.

“So, let’s talk some denims,” he segued. Along the wall in the shop hung 70 bolts of denim, almost exclusively selvage, which means (long story, short) that its edges are resistant to fraying. But 3×1 can source more than 800 different types of denim. If your tastes run Euro, and Diesel discontinues white jeans in your favorite club-going cut, Morrison is your man. Moreover, he can give raw denim any rinse you might dream of.

But for a relatively straightforward order, the matter starts with a simple choice, which concerns the slight tint beneath the blue of any jeans. Morrison said, “If you want more [the look] of the American jeans from the 1920s, ‘30s, ‘40s, ‘50s, you want red-cast denim”—as opposed to the green-cast denim traditionally associated with Japan. In either case, the shade becomes more apparent over time.

Our next consideration was the weight of the denim. A bigger yarn size means a thicker feel, a greater ability to crease and thus display sharp fades, and a more strenuous initial break-in period. Morrison, for instance, was wearing a fairly new, fairly stiff pair of 18-ounce raws. “This is the loom-state selvage from Select,” he said. “I gotta be honest: The first week was miserable. It’ll be good down the road, but …”

After five minutes of browsing and contemplation, I settled on a 14.5 oz. Kaihara open-weave, red-line selvage for my fabric. It was made with natural indigo, which added $125 to the price. Rest assured that Morrison can explain the properties of indigo in, literally, microscopic detail; let’s just say that natural indigo justifies its high cost by being richer in tone and rarer than the synthetic stuff.

With the fabric selected, it was time to discuss the many, many options for the exposed stitching thread. “We can do something crazy, which I’m not advocating,” Morrison said. I didn’t want anything crazy, but an interesting tug-of-war played out nonetheless. As a traditionalist, I thought I wanted the simple yellow or orange double thread familiar from, say, a classic pair of Levi’s.

As a designer, though, Morrison suavely kept urging me in a different direction. I ended up with one thread in “steam blue” and the other in a heather gray. The muted colors made the jeans dressier, while the contrasting colors showed off the virtue of work sewn on a rare, single-needle machine.

I chose a lining for my inside pockets. “Don’t go basic on me!” Morrison pleaded, steering me away from plain; I settled on a blue, bird’s-eye pattern. I had the coin pocket slightly widened to accommodate easy retrieval of my house keys. I pondered the best stitching for the back pockets, which would be moved three-eighths of an inch higher. I needed only a split second to ponder belt loops. These are straightforward, unless, say, you’ve got a 52-inch waist and want additional loops, or even an elastic insert, to achieve a proper balance.

For the fly, I wanted buttons, though not metal ones that can attract unfavorable scrutiny at airport security screenings. Morrison promised to order some non-metal, military, sew-on, fly buttons. He didn’t have the exact model on hand, but he showed me a similar wood version he’s used for a car-collector client who wanted the buttons of his fly to match the dashboard of his Porsche.

I took a traditional gunmetal button for the waist, despite the fact that 3×1 offers many of them in hand-painted enamel. “As luck would have it, there are most of your NFL-team combinations,” Morrison said. (Professional athletes, well compensated for being freaks of nature, are ideal bespoke-denim clients.) I chose gunmetal rivets, and we were done.

Stepping into the new jeans at the next fitting was a uniquely disorienting event. The second fitting generally takes a three- or four-week wait, but if you pony up for rush service, they can be ready in as little as two weeks. The jeans I stepped into were—in most respects regarding the all-important fit—identical to the garment I’d brought to my first fitting and spent thousands of hours in. Yet they were alien, impersonal, naked of the fades earned over those thousands of hours. They were very nearly excellent; the muted threads in particular had been a smart call.

But I decided to narrow the thighs an eighth of inch because, on further reflection, the taper wasn’t doing what I’d wanted. After adjustments were made the following day, they were really quite terrific.

There is one tiny flaw, though, on the fabric surface, above my right knee. It’s a bit of fluff that wasn’t singed off when the raw material left the mill, the kind of fault that, as it happens, indicates the high quality inherent to old-school craftsmanship. Also, the garment was helped along—I didn’t notice this until I got home—by the fact that Morrison had gone rogue and ignored my request for rivets. This feature made the garment look dressier and hinted at its craftsmanship; because of the number of stitches per inch that 3×1 uses, rivets aren’t essential to the jeans’ integrity.

But the jeans, very quickly, did come to feel necessary: an essential part of my wardrobe and my life. It’s hard to imagine a pair I’d like better. Which, it turns out, is the whole business plan.

“With bespoke jeans, we don’t make money on the first pair,” Morrison said. After his employees have spent six-and-a-half hours of pattern-making time on a prototype and then often, unlike in my case, made significant changes to that pattern, plus a whole do-over of a second garment, the costs add up. “Unlike a tailor, who may be making a suit out of muslin or some kind of cheaper, substitute fabric, we can’t do it that way.”

Once customers have been through the process, though, they find it impossible to revert to buying off the rack. “I wouldn’t say it’s a loss-leader strategy, but it’s a little more goal-oriented,” Morrison said. “It works out well for us.” Turns out the true cost of $1,500 jeans is a lifetime habit.