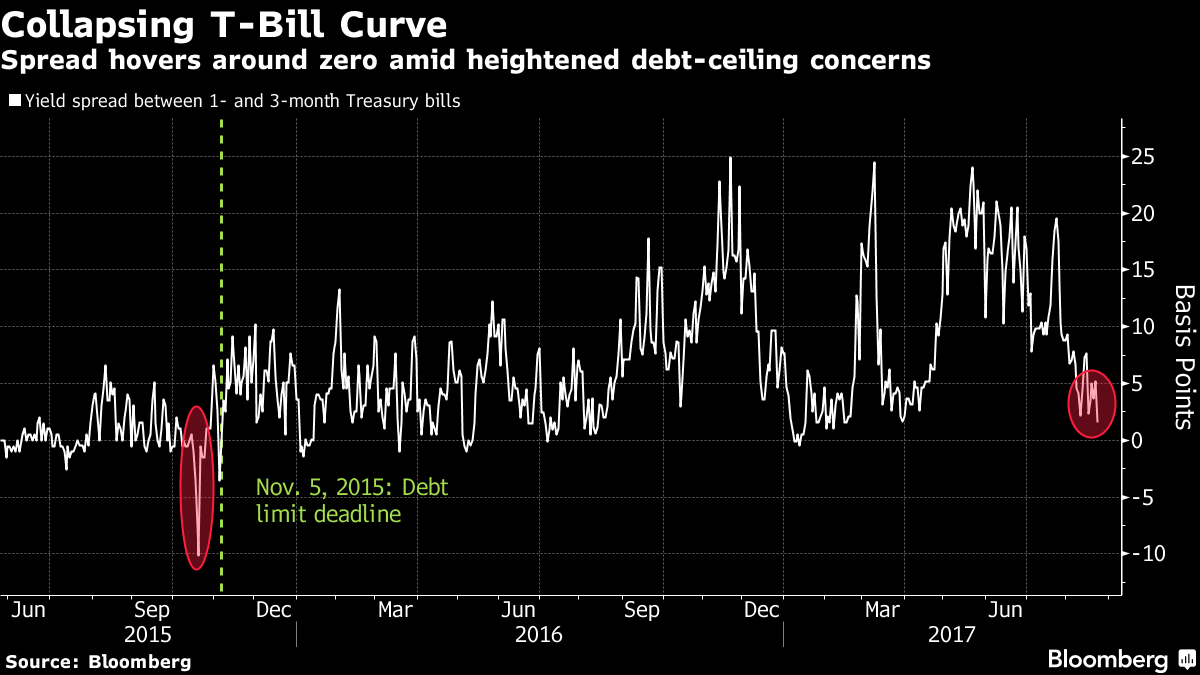 President Donald Trump said he asked Republican leaders in Congress to include a measure to raise the U.S. debt ceiling in a popular veterans bill to avoid a “mess” in which they have to rely on Democrats’ support.

Senate Majority Leader Mitch McConnell of Kentucky and House Speaker Paul Ryan of Wisconsin decided against tying the measures together, Trump said in a series of Twitter posts Thursday.

“I requested that Mitch M & Paul R tie the Debt Ceiling legislation into the popular V.A. Bill (which just passed) for easy approval. They didn’t do it so now we have a big deal with Dems holding them up (as usual) on Debt Ceiling approval. Could have been so easy-now a mess!” Trump tweeted.

GOP leaders discussed using a veterans bill as a vehicle to raise the debt ceiling. But conservatives in the House have demanded that steep spending cuts accompany any debt bill. Lawmakers are still trying to figure out whether there is a debt bill that can pass with only Republican votes in the House, or whether they will need to move a bill with bipartisan support that doesn’t contain any spending cuts.

Trump threatened Tuesday night to shut down the government over funding for a wall on the U.S.-Mexico border, which could complicate Congress’s job of raising the debt ceiling. Congress needs to pass a spending measure to keep the government open after Sept. 30 — at the same time it’s facing a deadline to raise the nation’s debt limit. GOP leaders don’t have a plan yet for how they’ll proceed, but one likely scenario is to package the two measures together to get them to the president’s desk.

The Bipartisan Policy Center, a Washington research group, said Thursday that the U.S. would begin missing payments in early to mid-October.

With little more than a month until what Treasury Secretary Steven Mnuchin called a “critical” deadline for addressing the debt limit, investor anxiety is beginning to manifest in shorter Treasury tenors.

The spread between one- and three-month bills has collapsed to roughly 1.6 basis points, the flattest since February, as investors start demanding higher rates on one-month paper relative to three-month securities in order to compensate for default risk.

House Minority Leader Nancy Pelosi of California said Thursday that with Republicans controlling both chambers of Congress and the White House, the party needs to develop a plan to deal with the debt ceiling.

“With so much at risk for hard-working families, Republicans need to stop the chaos and sort themselves out in a hurry,” she said in a statement.

Further complicating matters, Trump is engaged in a public spat with McConnell. The New York Times reported this week that Trump and McConnell haven’t spoken in weeks, after a contentious phone call that devolved into a profanity-laced shouting match.

Trump lashed out against McConnell again Thursday morning on Twitter. “The only problem I have with Mitch McConnell is that, after hearing Repeal & Replace for 7 years, he failed!” Trump tweeted. “That should NEVER have happened!”

In a statement Wednesday, White House Press Secretary Sarah Huckabee Sanders said Trump and McConnell “remain united” on many issues and will meet after Congress returns to Washington in September. McConnell said in a statement he is working with Trump to prevent a government default.

Trump has made clear for months he wasn’t happy with the last bipartisan spending deal in May because it didn’t fund a new wall on the southern border, his signature campaign promise. At the time, he tweeted that a “good” government shutdown may be needed to force Democrats to make concessions.

“If we have to close down our government, we’re building that wall,” Trump said during a campaign rally in Phoenix on Tuesday. “One way or the other, we’re going to get that wall.”

Senator Jeff Flake, a Republican from Arizona, said shutting down the government over a border wall would be a mistake.

“We don’t need a government shutdown — that never ends well. We don’t save money doing it,” Flake said Thursday on Fox News.

While Trump said on the campaign trail that Mexico would pay for the wall, the White House said Trump expects Congress to provide the funding up front.

“We’re looking forward to working with Congress to get funding for the border wall,” White House spokeswoman Natalie Strom said in an email. “The president ran on it, won on it, and plans to build it.