The GOP and Business Will Go to War Over Foreign Taxes 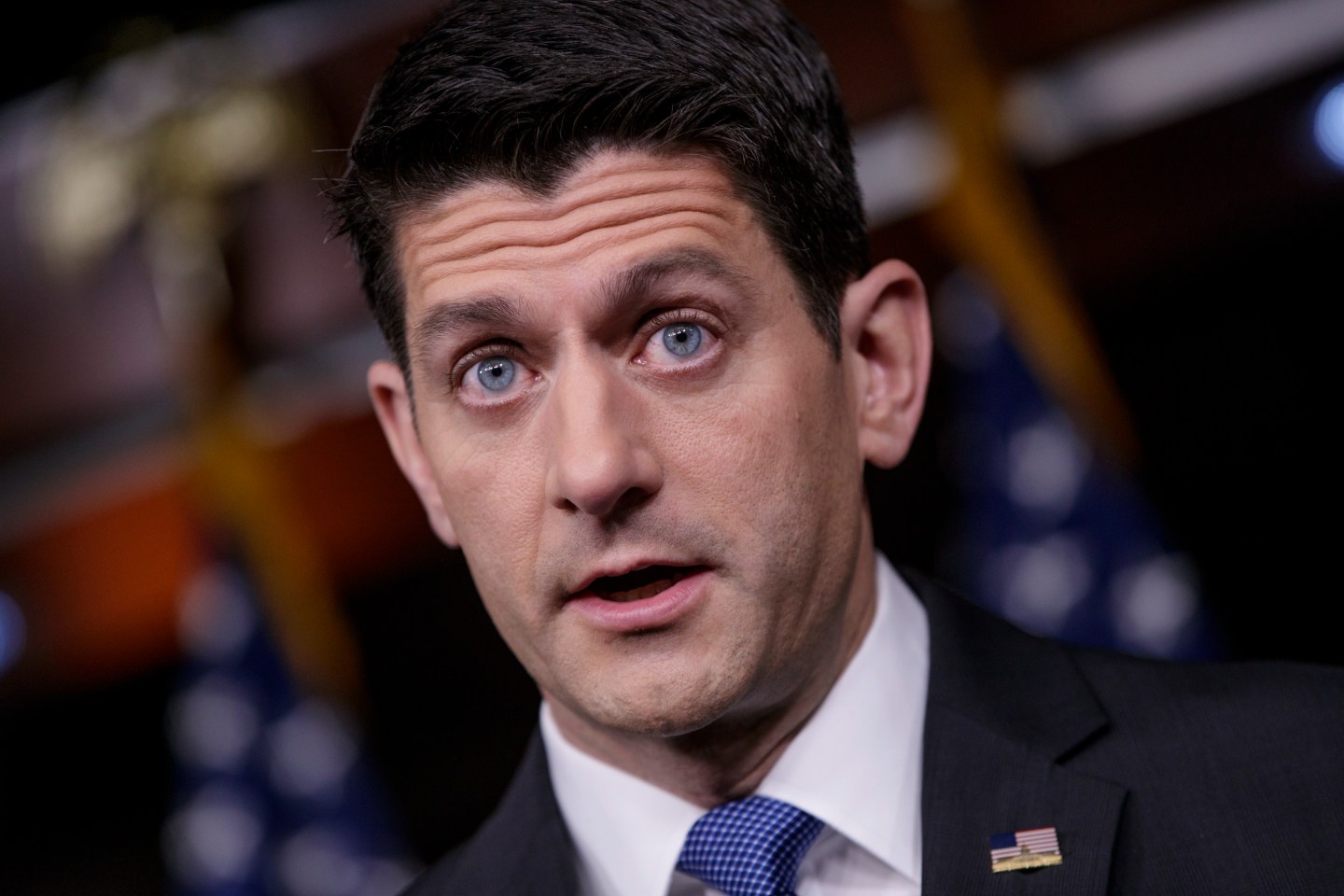 FILE- In this Feb. 16, 2017, file photo, House Speaker Paul Ryan of Wis. meets with reporters on Capitol Hill in Washington. Beneath the capital’s radar looms a catchall spending package that’s likely to top $1 trillion. It could get embroiled in the politics of building Trump’s wall at the U.S.-Mexico border and a budget-busting Pentagon request. (AP Photo/J. Scott Applewhite, File)
J. Scott Applewhite AP

The GOP is advertising its forthcoming tax reform bill as an historic boon to business. But a fierce fight is looming over the treatment of foreign earnings. For key industries, notably tech, pharma, and manufacturers that operate supply chains spanning the globe, the Republican platform could actually swell their tax bills by forcing them to pay U.S. taxes right away on money they used to shelter for years at a time in foreign subsidiaries. That’s because the legislation can only work by severely restricting classic shell games for shifting profits to low-tax nations. “The legislators will face a lot of tough choices,” says Scott Greenberg, a senior analyst at the conservative-leaning Tax Foundation. “And those choices will make many companies extremely angry.”

The battle of Big Business vs the GOP is now unavoidable because Republican legislators just dropped a crucial measure from their blueprint, the controversial Border Adjustment Tax. On June 27, the Trump Administration, and the leadership in the House and Senate, issued a joint statement outlining their general goals on tax reform. The brief manifesto advocated three principles: First, simplifying and lowering taxes for families; second, reducing levies on businesses; and third, making the reforms permanent—essential to lifting growth.

But the Republicans scuttled a pillar of the previous House plan, the BAT. To understand the BAT’s importance, it’s useful to review the House platform—the most detailed GOP proposal to date—released in June of 2016. The blueprint advocated big reductions in both personal and corporate rates. For families and individuals, the current 7 brackets would shrink to four, and levies would fall across all income ranges. Families earning from $18,550 to $75,300 annually would pay 12% versus 15% today. High-earners would get the sweetest deal. Those with incomes over around $400,000 would see their rates drop from 39.6% to 33%.

On the corporate side, the House proposed radically lowering the federal rate from 35% to 20%. It also championed a maximum levy of 25% on “pass-through” income paid by owners of small and medium-sized businesses that’s now taxed at personal rates that can reach over ten points higher. To pay for laudably lowering rates, the House measure proffered three major “base broadeners.” The first applied to personal taxes: Eliminating all deductions except mortgage interest and charitable contributions. The other two came from the business side, ditching the interest deduction on all new corporate loans, and imposing the Border Adjustment Tax.

According to projections from the Tax Foundation, the BAT would have raised between $900 million and $1.1 billion over the next ten years. The BAT was crucial to paying for lower rates on both families and companies. Without it, the gap between outlays and revenues is so gigantic that the steep rate reductions proposed by the GOP become politically unreachable.

The BAT’s demise will reshape the Republicans’ legislation in two fundamental ways, says Greenberg. First, the GOP will scale back its ambitions for rate reductions. According to Greenberg, the bill might propose a corporate rate of 25% instead of the initial 20%, and a raise the maximum for pass-through income from 25% to 30%. “Those numbers could take care of the shortfall from taking the BAT off the table,” he says.

The second aftershock totally changes the calculus on foreign profits, and will pit the GOP against powerful multinationals. Under today’s regime, all profits generated either in the US or anywhere in the world are subject to US tax, with an important wrinkle. As long as that foreign income remains parked in a foreign subsidiary, the parent company can delay paying the U.S. income tax. Hence, America’s multinationals have a big incentive to leave earnings in low-tax jurisdictions such as Ireland—where the corporate rate is 12.5%—for years, instead of repatriating the cash and paying an extra 22.5%, the difference between the levy already paid in Ireland, and the 35% owed the Treasury.

The BAT would have elegantly eliminated all incentives to stash profits abroad. It would have been coupled with a “territorial” tax system, under which U.S. companies pay only local tax on, say, profits booked in Ireland or France. But courtesy of the BAT, they’d gain nothing by shifting profits to low-cost countries. That’s because a BAT imposes the U.S. maximum tax of 35% on all revenues, not profits, generated abroad, and allows a deduction for all revenues booked in the US. Since taxes are based on sales and not reported earnings, companies gain nothing from shifting profits to foreign subsidiaries in an effort to defer paying taxes in the U.S.

Now that the BAT is dead, U.S. multinationals could swell overall profits by shifting tons of earnings to low-tax nations. For example, once a pharma titan pays the 12.5% rate in Ireland, it owes Uncle Sam not an additional dime, unlike today’s regime, where the money only sits U.S.-tax-free until it’s repatriated. The big fear is that a new wave of gamesmanship substantially erodes America’s corporate tax base. The damage to future revenues could be big: Corporate taxes are forecast to contribute around $4 trillion over the next decade, around 10% of total revenues.

Here’s where the battle will come. The legislation is likely to contain a number of safeguards to prohibit or limit the classic strategies multinational employ right now, and will be tempted to employ more ardently under the territorial system. Greenberg points to three areas. The first involves intellectual property. Assets such as patents and trademarks are highly mobile. Tech and pharma giants can transfer IP to subs in low-tax nations, then pay royalties to those subs that would otherwise flow to the parent in the U.S. “If the U.S. cracks down on those practices,” says Greenberg, “then companies might have to pay, say 22.5%, the difference between rates in Ireland and the US, to the Treasury on profits from those royalties, and pay it right away. Now, they’re able to defer taxes on those earnings as long as they’re parked abroad.” So, he concludes, even though rates are lower, some companies would have to book a lot more income in the US versus instead of parking it abroad tax free for years at a time. As a result, U.S. certain tech players could be worse off under “reform” than they are today.

A second category encompasses multinationals with extensive supply chains. An auto or appliance maker might assemble the final product stateside from parts made in Japan, Mexico and Canada. Creative “transfer pricing” could assign 35% of total profits to the margins on those parts, instead of 20%, raising income abroad and lowering earnings in the US. Manufacturers fear that the new legislation will contain severe restrictions on transfer pricing designed to steer maximum profits to the U.S. A fierce lobbying campaign is at hand.

Third, multinationals can lower their U.S. taxes by taking large loans from foreign subsidiaries at unusually high rates of interest. The interest income is taxed at low rates in places such as Ireland, and highly-taxed U.S. earnings are reduced. Today, the advantage to those cross-border loans is that the foreign subs don’t pay tax on the bloated interest until the profits are repatriated. The benefits flow from deferring tax payments, often by many years. But under the new system, the benefits of moving more and more profits abroad becomes far greater, because multinationals will pay corporate taxes only in the nation where the profits are made, and nothing extra in the US when they’re sent home.

The critical danger: If powerful lobbying brings all the threatened industries what they want, the erosion in the corporate tax base will make personal and business rate reductions impossible. The business community itself will destroy tax reform in an effort to secure its own special privileges.

The BAT’s elimination was a relief to many U.S. corporations, including retailers that feared bigger tax bills because they rely so heavily on imports that would have faced big levies. But its demise is now raising an entirely different set of problems. Get ready for a battle royal between a GOP that prides itself on championing business, and businesses that could be the new enemies of “reform.”