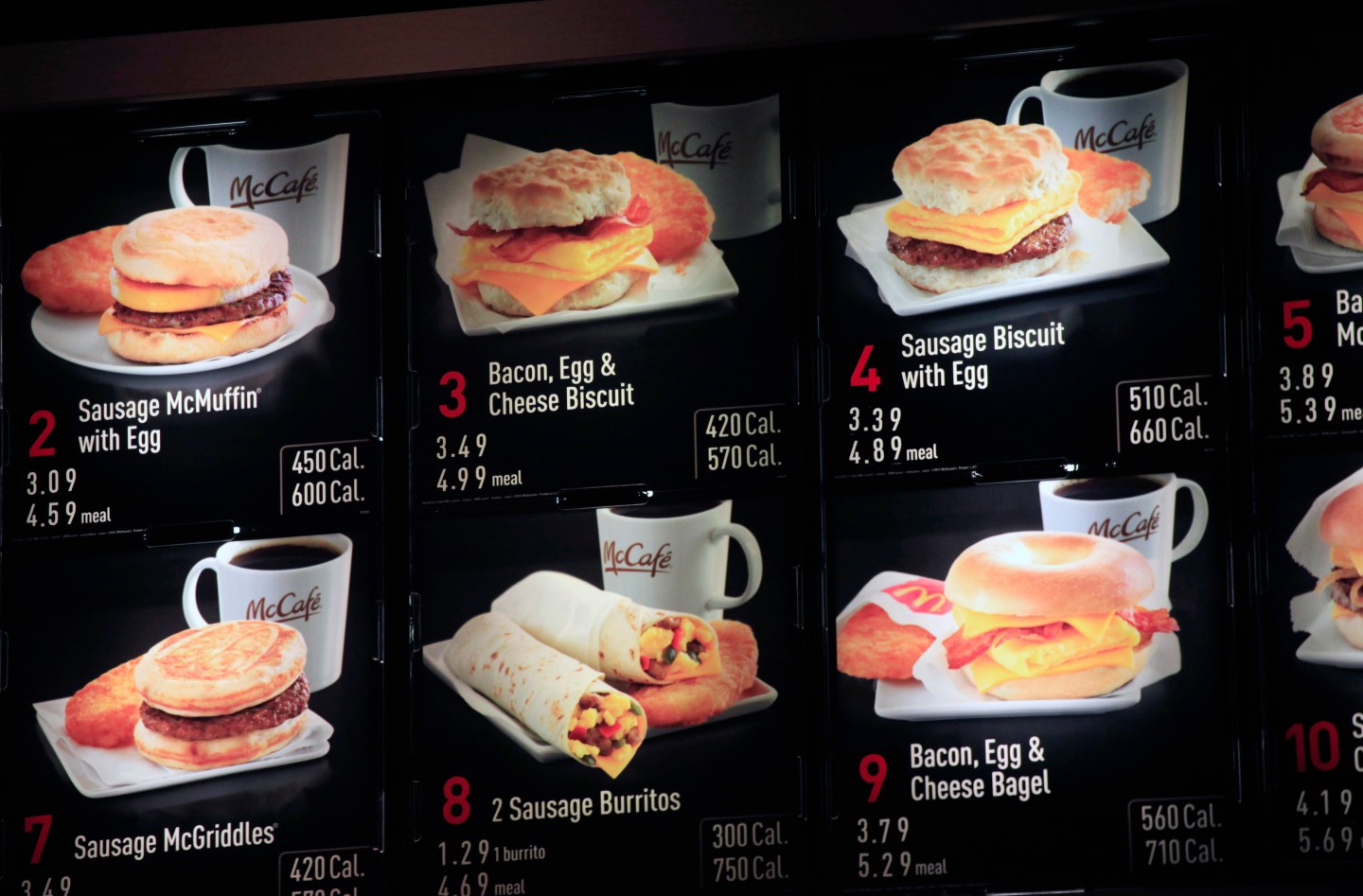 FILE - In this Sept. 12, 2012 file photo, items on the breakfast menu, including the calories, are posted at a McDonald's restaurant in New York. Facing a May 5, 2017 compliance deadline set by the Food and Drug Administration last year, some restaurants and other establishments are eyeing a massive spending bill that Congress will have to pass in the next week to keep the government open and hope to either delay the menu labeling rules again or include legislation in the larger bill that would revise the law and make it easier for some businesses to comply. (AP Photo/Mark Lennihan, File)
Mark Lennihan—AP

The U.S. threw its weight on Monday behind trade groups suing New York over what the government calls a “unilateral” plan to enforce a local 2015 calorie-labeling law at restaurants and food retailers in the city sooner than a thrice-delayed federal effort.

A provision of the 2010 Affordable Care Act that requires calorie labeling nationwide gave the Food and Drug Administration full control over when and how to enforce it, the government said. That means Bill De Blasio, New York’s Democratic mayor, can’t implement a local law starting Aug. 21, the U.S. argues. The FDA in May again delayed the federal law for a year.

“It’s pretty clear from the delay of the national law the day before it was supposed to take effect that the Trump administration has no intention of supporting menu labeling,” Colin Schwartz, a senior associate at the nonprofit Center for Science in the Public Interest, said in a phone call. Trump has signaled that he’ll “do whatever industry wants him to do,” he said.

The government argued federal law preempts the city’s effort, and it didn’t say that Trump was backing away from the labeling requirements altogether. But the president has promised to slash government regulations of business and has been critical of rules put in place by his predecessor that he says gum up the economy.

A hearing on the city’s request to dismiss the lawsuit is set for Aug. 16 before U.S. District Judge Victor Marrero.

Many restaurant chains across the U.S. already include calorie labeling on their menus voluntarily.

De Blasio’s office said in a statement in May that the city would focus on its own efforts in the name of public health, regardless of the FDA’s delay.

“While the Trump administration may disagree, knowledge is power, and that is particularly true when it comes to nutrition,” New York City Council Member Corey Johnson, chairman of the Health Committee, said in the statement. “People have the right to readily-available information regarding the food they consume and the effects it will have on their health.”

A message left at the Health and Human Services press office wasn’t immediately returned. DOJ spokeswoman Dawn Dearden declined to comment. A message left with de Blasio’s office wasn’t immediately returned. Osvaldo Vazquez, the attorney for the National Association of Convenience Stores, one of the plaintiffs, declined to comment.

New York in 2008 became the first city in the U.S. to require fast food and other restaurant chains to post calorie counts. In 2015, the city beefed up the law to include calorie information about prepared foods sold in chain convenience stores and grocery stores, as well as a requirement that the average recommended daily intake of 2,000 calories be displayed to give the labels context.

The New York law, which includes fines of up to $600 for failure to comply, applies to chain restaurants with 15 locations or more nationwide. It’s expected to affect about 3,000 restaurants and about 1,500 food retailer chains, the city has said.

The FDA in May extended the federal compliance date by a year to May 7, 2018, citing “the diverse and complex set of stakeholders affected by the rule and continued, numerous, and fundamental questions they raise regarding the final rule and its implementation.”

Federal law prohibits any state or municipality from imposing food-labeling regulation that’s not identical to labeling requirements established by Congress and the FDA, the trade groups said in their complaint. New York’s regulation isn’t identical because it takes effect immediately while the FDA “made a considered decision” to require compliance until May, the groups said in their request for an injunction against the enforcement of the city law.

Former President Barack Obama’s FDA in 2015 issued the first delay of the labeling law as part of an effort to expand the reach of the legislation. Congress delayed it again in 2016.