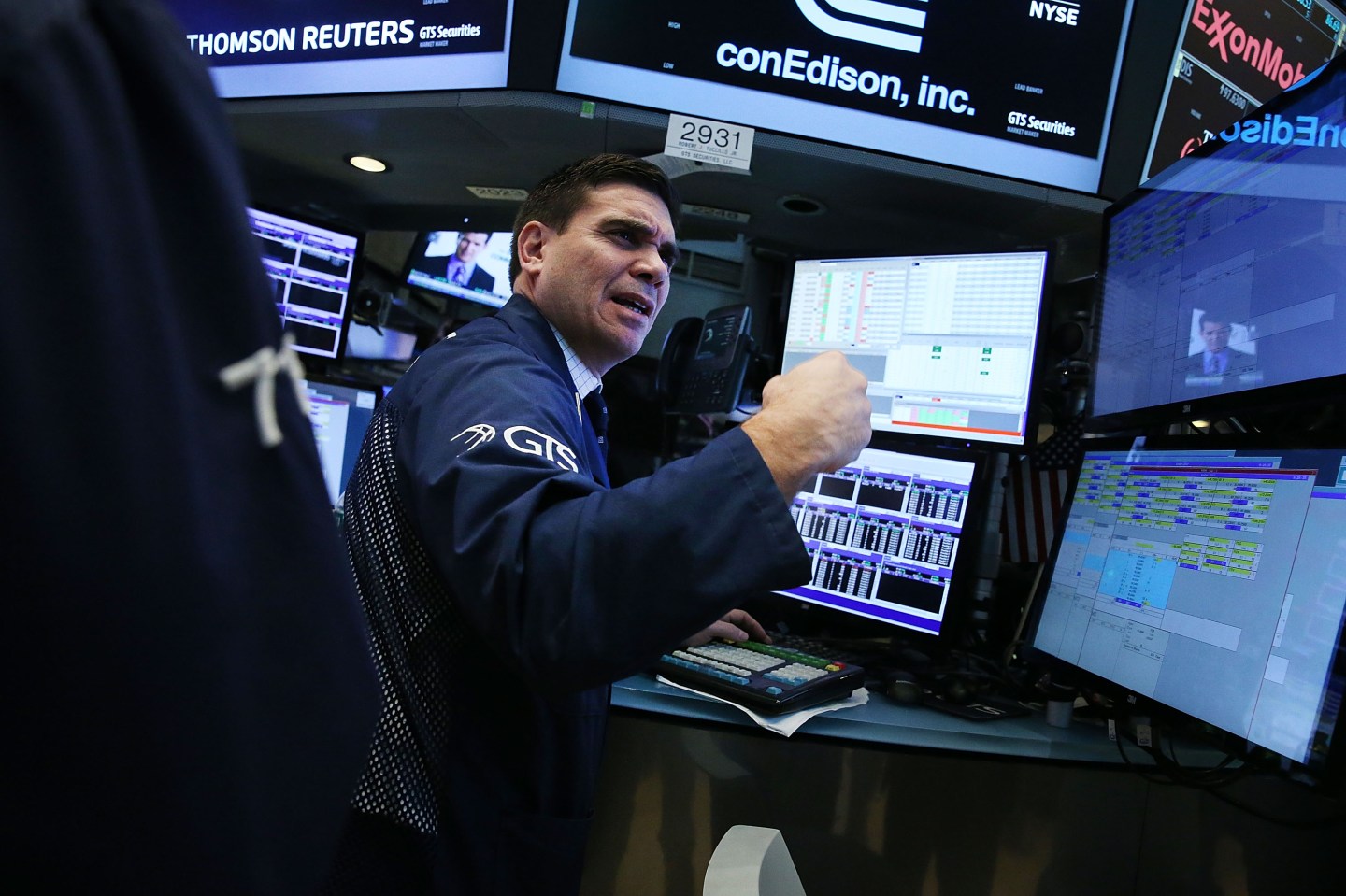 Can profits really grow in double-digits in an economy bumping along at 2%?

That’s the question that investors should be asking, and instead ignore at their peril. We’ve all heard the Wall Street bulls’ mantra, endlessly advanced by analysts and market strategists, that a renewed surge in profits will keep equity prices waxing. The current consensus among analysts forecasts that reported S&P earnings-per-share will jump from $100.29 in Q1 of 2017 (based on the past four quarters) to $133 by the end of 2018, an annualized increase of over 18%.

Of course, those consensus forecasts are always inflated. But even if we discount those projections by 45%, the bulls are still expecting 10% gains in EPS over the the seven quarters spanning Q2 2017 to Q4 2018.

But recent history, and projections from every agency from the IMF to the CBO, foresee GDP growth in the 2% range, or 4% including projected inflation, well into the future. So how can the profits expand 6 points faster than the overall economy that drives the sales that largely determine the course of those profits?

It’s clear that over long periods, growth in profits and GDP are closely linked. But that’s not necessarily the case in shorter timeframes. If EPS are stuck well below trend for an extended period, earnings can rapidly expand to regain their historic levels. But today, profits are hardly depressed. It’s the opposite: Two key metrics confirm that earnings are extremely high by historical standards. On average, corporate profits have averaged 7.5% of GDP since 1951. Today, they absorb 9.2% of national income. How about margins? They’re lofty as well. For the Fortune 500, the ratio of profits to sales was 7.4% in 2016, more than 2 points higher than the average over the 64 year history of the list, and the fourth highest annual reading.

Hence, the most likely outcome is that profits at best expand at the less-than-thrilling rate of GDP.

What does that mean for the future of stock prices? Let’s assume that today’s price-to-earnings ratio remains at the current, and extremely high, 24.6. Haven’t heard that figure? That’s the one in the books, the ratio of the current S&P 500 average of 2464 to 12-month, reported annual earnings of $100. In other words, what companies actually earned. The 18 multiple more routinely cited is bogus. It’s based on the bluebird prognosticating that “forward” profits will reach $133 in seven quarters, a mathematical impossibility.

At a PE of almost 25, the S&P is producing $4 in earnings for every $100 you spend on stocks. You receive $1.90 of that $4 in dividends, for a puny yield of 1.9%. A constant PE of 25 predicts a total “real” return of the inverse of that ratio, or 4%. In addition to the 1.9% dividend yield, the other 2.1% comes in the form of profit gains that drive equivalent capital gains––quite reasonable given current projections of overall economic growth. The total comes to 6%, including 2% inflation. That’s nowhere the double-digit future the earnings bulls are projecting, but with the 10 year treasury at 2.33%, it’s not bad.

Or is it? The risks that future returns will fall far below our benchmark of 6% over the next decade are a lot greater than the chances they’ll exceed that bogey. Since corporate profits are well above historic averages, they could finish in three or four years right where they are today, repeating the scenario since 2013. That’s the danger signal flashed by the cyclically-adjusted price-earnings multiple developed by economist Robert Shiller, a yardstick that smoothes the peaks and troughs in earnings to get a normalized multiple; today, profits according to the CAPE are so far above normal that the CAPE adjusted PE looms at a terrifying 30.

Nor will low rates help. John Hussman of the Hussman Funds stated in a recent article that “if low interest rates emerge as a consequence of low expected nominal growth…prospective returns will be lower,” because low economic growth causes both low interest rates and low profit growth. They’re the stock market’s ham and eggs. Hussman is projecting a 0 total return for the S&P over the next decade.

Hussman makes a crucial point on the interaction between rates, economic growth and gains in profits. All three are closely aligned over any extended period. It’s sub-par economic growth that causes both low real rates and sluggish profit growth. So low rates shouldn’t be a boon to stocks at all if they’re signaling a mediocre business climate ahead, as is usually the case. As Hussman points out, the benefit of the “low discount rate” is fully offset by the slower growth in earnings. So flagging growth and declining rates cancel each other out.

It’s true that a fall in real rates swells multiples. But that game is over. Now we’re left with hugely expensive PEs that will saddle folks buying equities today with extremely low returns. That’s the curse of mid-20s PEs.

Why, then, do stocks keep soaring? For Hussman, it’s all about a speculative frenzy, an “overvalued, overbought, overbullish syndrome.” The market keeps defying his warnings, but one thing is certain: A future where EPS grows at 10% in a 4% (2% real) economy, where profits gallop while GDP lopes, is a Wall Street fantasy.