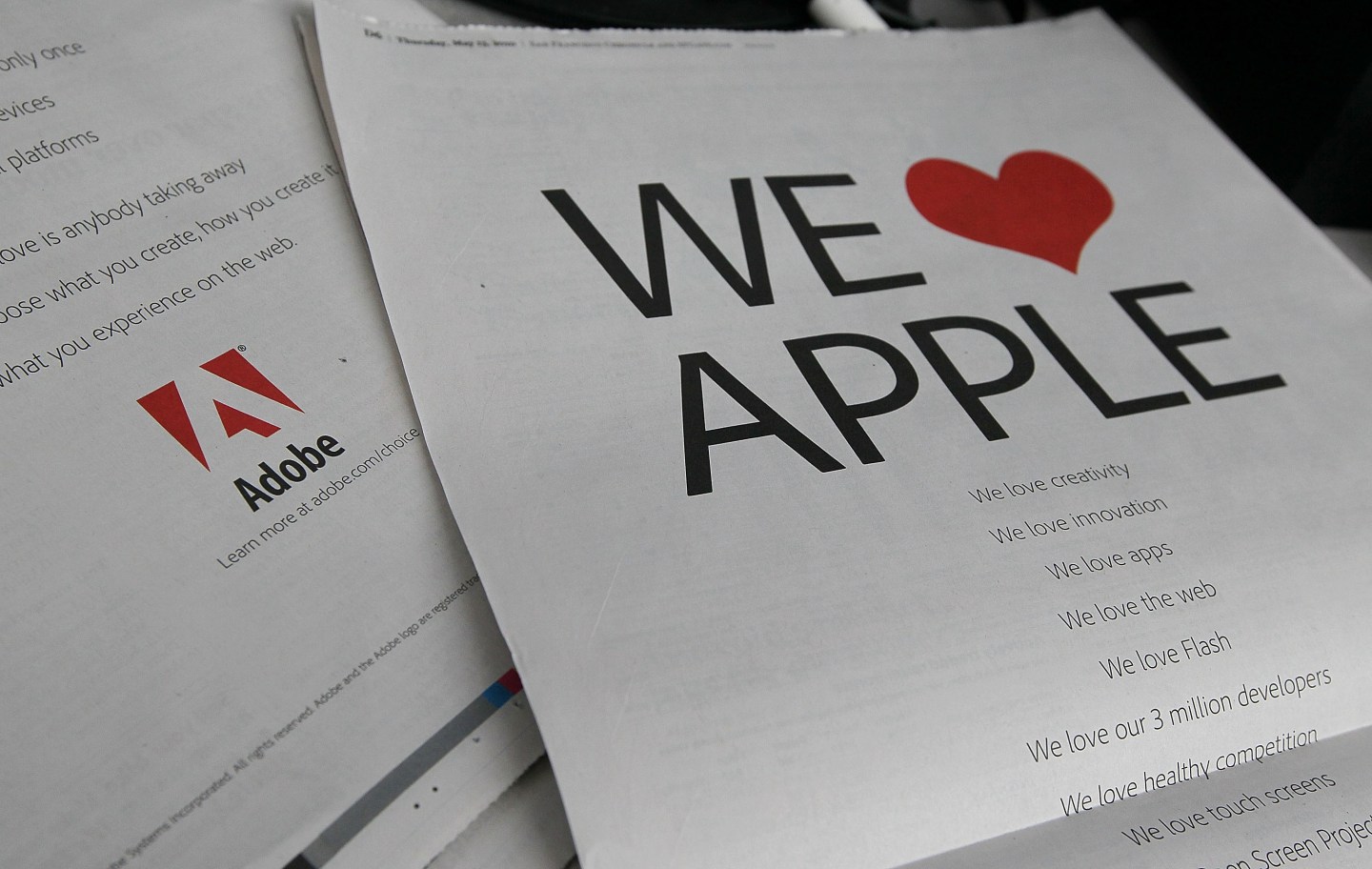 SAN FRANCISCO - MAY 13: A full page ad by Adobe Systems is displayed on the back of the San Francisco Chronicle business section May 13, 2010 in San Francisco, California. Adobe Systems has fired back at Apple CEO Steve Jobs' recent denouncement of Adobe's Flash technology and is running advertisements in major newspapers saying "We Love Apple". (Photo Illustration by Justin Sullivan/Getty Images)
Justin Sullivan/Getty Images

The news this week that Adobe Flash Player — and as a result ActionScript, the language used to create Flash graphics — will be phased out by 2020 triggered some laughably painful memories for me.

It’s no small feat for a journalist or, really, anyone without a computer science background to learn a programming language. And there’s no coder who won’t eventually watch the first language they ever learned die out, becoming fodder for Drug or Programming Language quizzes.

I learned that in 2010 after mastering my first programming language, ActionScript, and using it to fill my portfolio with Flash graphics. A few months later Steve Jobs published his infamous never-on-the-Apple-mobile-devices letter about Flash.

So this week’s news about Adobe discontinuing Flash — it’s personal. I’m not here to launch a nostalgic campaign to stop Adobe from killing Flash like the one that moved Microsoft to reassure MS Paint fans that the application will be available for free in the Windows Store.

On the contrary, I’m surprised it took this long for Flash to go extinct. I have hilariously bad luck with soon-to-be-deceased technology.

In 2000, I convinced my parents to buy me a Cybiko for Christmas — a Russian-made handheld computer marketed to teens so they could send each other an early version of text messages without a cell phone plan or the Internet. Alas, it had a maximum range 0.19 miles. I’d have complained about that at the time, but I was the sole Cybiko owner in my school. The limited range was moot — о, чёрт.

From 2007 through 2010, when all my friends were click-wheeling through their playlists on iPods, I was a SanDisk SDMX1-carrying member of the iSheep tribe and convincing other people to buy them at my part-time Circuit City (R.I.P.) sales job.

The year I started that job, the company made the Fortune 101 Dumbest Moments in Business list and filed for bankruptcy.

Imagine how I wailed into the void when the following three things occurred in 2010:

I have likened the Jobs letter to the comet that caused the extinction of 70% of life 65 million years ago, most notably the dinosaurs. There were some immediate casualties, but the real death toll came from the fact that the comet made Earth an increasingly less habitable place for a lot of species.

In fact, I’ve used this image in slide decks when I plan on telling this story at conferences.

My standard advice now for journalism students, especially those wondering if it’s really worth their time to learn how to code, is that learning a computer programming language is a skill in and of itself. If you develop the humility it takes to copy and paste error messages into Google while figuring out why a program doesn’t work only to discover it’s all because of an errant comma, you might just make it.

Other coders will nod with empathy — and be able to carbon date you, how cool! — when they hear your tale of the obsolete languages you learned and haven’t touched in years.

Jobs’ letter didn’t destroy all traces of Flash right away. In fact, one of the biggest complaints at the time was that iPhone users wouldn’t be able to watch YouTube videos without it. Flash used to be everywhere. (If you’re not reading this on an iPhone, you can check out some Flash Games that kinda still work.) A 2008 piece in Wired cites an Adobe report that found 98% of computers supported Flash. And guess what: The link to that Adobe report is now broken. The symbolism of it all!

So while the news just came out this week that Flash will be phased out by 2020, its demise will have taken 10 years by the time it disappears. It’s been at the bottom of the list or close to it in IEEE Spectrum’s ranking of programming languages for a while.

Now, when I want to make interactive graphics, I use JavaScript. It seems safe and sound sitting at #7 on the IEEE ranking, right? Even more encouraging: Python, the language I use to dig around in data, has risen to the top of the list.

Perhaps my luck has finally changed. But I’m not putting money on it. When a comet inevitably comes careening through the atmosphere to trigger an impact winter for my current faves, I’ll have my sense of humor to keep me warm.