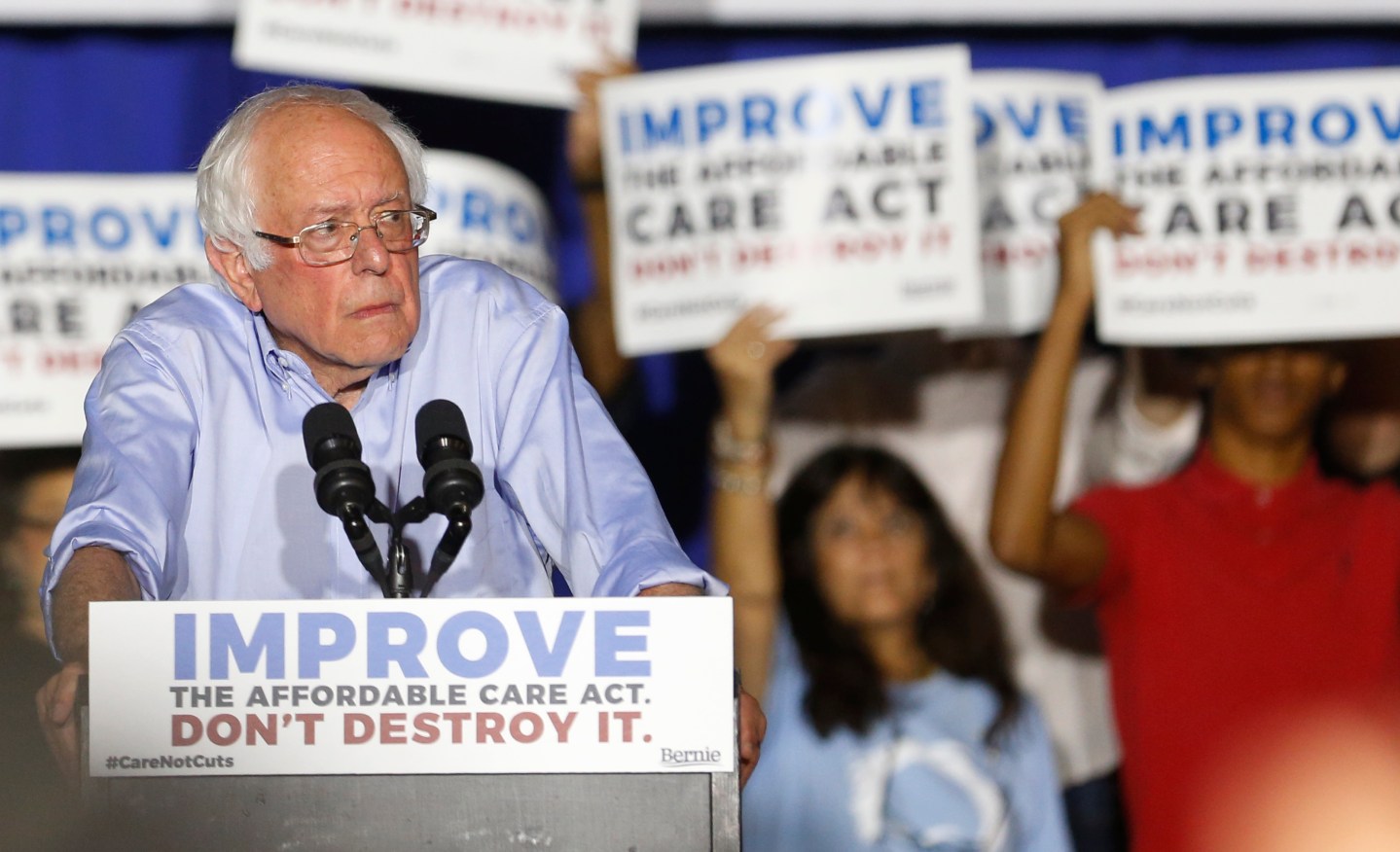 Bernie Sanders was traveling through Trump country (West Virginia and Kentucky) last weekend in an effort to rally opposition to Republican attempts to repeal and replace Obamacare. These efforts notwithstanding, Sanders still refuses to embrace Obamacare. “As soon as we defeat this disastrous bill, I will be introducing a Medicare-for-all, single-payer program,” he said during the rally.

Sanders still describes himself as a “democratic socialist,” rejecting the moderate left progressivism of the Clintons, as he emphasized in his presidential campaign. According to Sanders, the Clintons embraced Wall Street, where Hillary Clinton had made hundreds of thousands of dollars giving speeches, following in the footsteps of Bill Clinton, who during his presidency had deregulated banks by signing the Gramm-Leach-Bliley Act of 1999, repealing the Glass-Steagall cornerstone of New Deal banking reform. The Clintons had accommodated consolidations and mergers in the world of banking, they had encouraged the growth of too-big-to-fail big banks, and Sanders was the only candidate willing to take on Wall Street and break up the big banks.

Putting aside the question of the practicality of a break-up-the-big-banks reform agenda, we should pose a simpler, conceptual question first: Why would a socialist want to break up big banks? Socialists want to nationalize banks, not break them up. If anything, socialists prefer bank consolidation to simplify the administrative task of running a nationalized banking system. Nationalization is the only path to provide the collective ownership of the means of production (in this case, the production of financial products). Socialism entails the abolition of private property in business life, but breaking up banks would leave banks as privately owned enterprises still seeking to make profits through the marketplace. Socialists argue that profit-making in a competitive market leads inevitably to exploitation and alienation.

The proposal to break up the banks sounds more like the trust-busting Progressive Era agenda one would associate with Woodrow Wilson than anything socialist. Eugene Debs, not Woodrow Wilson, was the socialist of the Progressive Era, and Debs had been sufficiently schooled in Marxist theory to realize that socialism required the abolition or private ownership of the means of production. Sanders admires Debs (he had a picture of Debs displayed in City Hall when he was mayor of Burlington, Vt., but it isn’t clear he understood the radical agenda Debs had embraced. Is it possible that the only prominent national politician who describes himself as a socialist today is clueless regarding the meaning to the term socialism?

Prepared remarks by Sanders on democratic socialism suggest as much. He begins his commentary on democratic socialism by focusing on Franklin Roosevelt’s 1937 inaugural address, where Roosevelt famously stated that one-third of the nation was “ill-housed, ill-clad, ill-nourished.” Sanders identifies with FDR and his campaign against the “economic royalists,” praising New Deal policies for succeeding in putting “millions back to work” and taking “them out of poverty” and restoring “their faith in government.” Democrats would almost universally share these laudatory views of Franklin Roosevelt, but Sanders proceeds to note that almost everything FDR proposed was called “socialist.” Does this make FDR a socialist? The implication of Sanders’ logic, given that he embraces both FDR and democratic socialism, is that because FDR’s enemies labeled his agenda socialist, he was a socialist. FDR’s political enemies also called him a dictator, especially after he introduced his court-packing bill. Did that make FDR a dictator?

Finally, Sanders concedes, “I don’t believe government should own the means of production, but I do believe that the middle class and the working families who produce the wealth deserve a fair deal.”

Sanders isn’t a socialist. He is an American progressive. Given the dismal history of socialism in the 20th century, which is inextricably intertwined with the history of totalitarianism, Sanders would do well to start using words with their conventional meaning. The only cause that Sanders’ idiosyncratic usage of words promotes is his own political ambition.

An earlier version of this article incorrectly attributed the following quote to Bernie Sanders: “Not even remotely anymore. The Democratic Party now is a disaster, an absolute mess. I don’t see a party now that represents me.” A rally attendee said it, not Sanders.