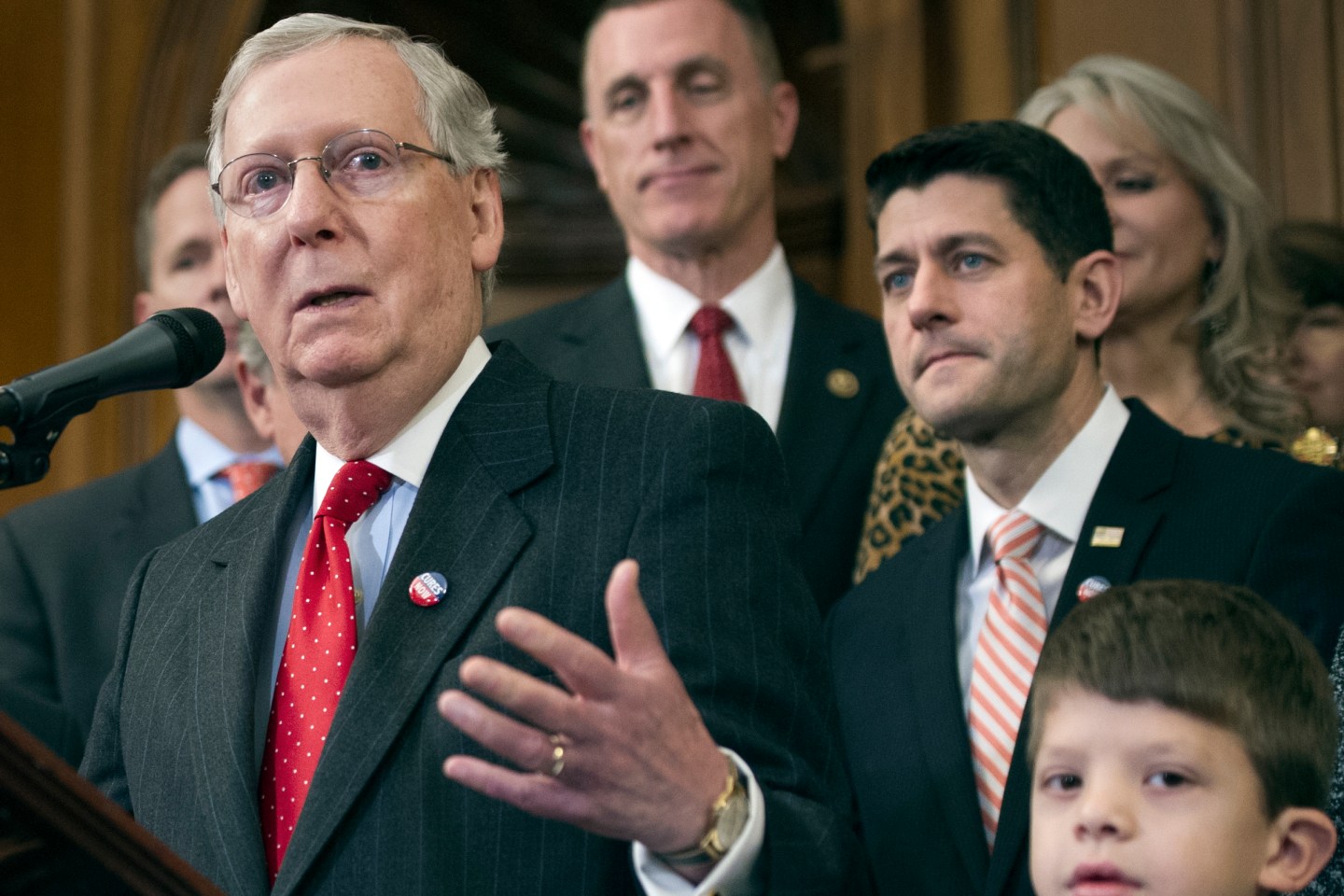 FILE - In this Dec. 8, 2016 file photo, House Speaker Paul Ryan of Wis., and others, listen as Senate Majority Leader Mitch McConnell of Ky., speaks on Capitol Hill in Washington. Republicans' grip on all levers of power stands as a mandate to the GOP-led Congress, which will move swiftly to try to undo eight years of outgoing President Barack Obama's agenda. (AP Photo/Cliff Owen, File)
Photograph by Cliff Owen—AP

GOP leadership has been aiming for a vote on the Better Care Reconciliation Act (BCRA)—the Senate’s version of health care legislation to supplant Obamacare and an analogue to the House-passed American Health Care Act (AHCA)—sometime this week with the hopes of smashing up a political cinderblock before the 4th of July Congressional recess. But Senate Majority Leader Mitch McConnell still faces a number of hurdles going into the crucial next few days, including very publicly expressed reservations from various factions of the Republican caucus.

GOP moderates like Alaska’s Sen. Lisa Murkowski, Maine’s Susan Collins, and Nevada’s Dean Heller had already mentioned some skepticism about the health bill (and the largely secretive process that went into crafting it) before its unveiling last Thursday, particularly over provisions that would fundamentally restructure the Medicaid program for low-income Americans on top of dismantling other Obamacare provisions. On Friday, Heller, a vulnerable Senator facing re-election, said he wouldn’t be able to support the legislation in its current iteration; Collins also expressed “very serious concerns” during the Sunday morning shows circuit and added she doubted McConnell could get the requisite 50 votes for passage this week.

The White House and its allies have tried to push back on the criticisms by pledging to work with Senate holdouts and claiming that previous analyses claiming that the bill cuts Medicaid are incorrect—a point echoed by both Health and Human Services (HHS) Secretary Tom Price and administration counselor Kellyanne Conway on Sunday. Independent reports have shown the House’s health bill would vastly cut funding for the program and likely to lead big coverage losses, and early analyses have suggested that the Senate’s approach would actually gut the program even further.

The Congressional Budget Office’s initial review of the Senate’s draft bill is expected to be released Monday. Its analysis of the AHCA projected hundreds of billions in government spending but also 23 million fewer insured Americans over the next decade. That CBO analysis could prove critical for several Senate moderates’ votes.

But even if it does assuage their fears, the health bill will also have to win over conservatives—including a surprising new skeptic in Wisconsin’s Sen. Ron Johnson, an ardent Obamacare critic, who said he finds it difficult to see how he can vote yes on the bill by this week. “There’s no way we should be voting on this,” he said on NBC’s Meet the Press. A number of other conservatives like Kentucky’s Sen. Rand Paul and Utah’s Mike Lee, as well as prominent political groups like the Koch brothers’ network, have criticized the draft as not going far enough to kill Obamacare.

Still, the House’s health care bill was also assumed to be on bad footing before it wound up passing. And the GOP’s pent-up urge to fulfill an Obamacare-crushing campaign promise could be a powerful motivator. But passage in the Senate would just be the first step; it would then have to be reconciled with lawmakers from a more conservative House before once again passing both chambers and heading to President Trump’s desk.