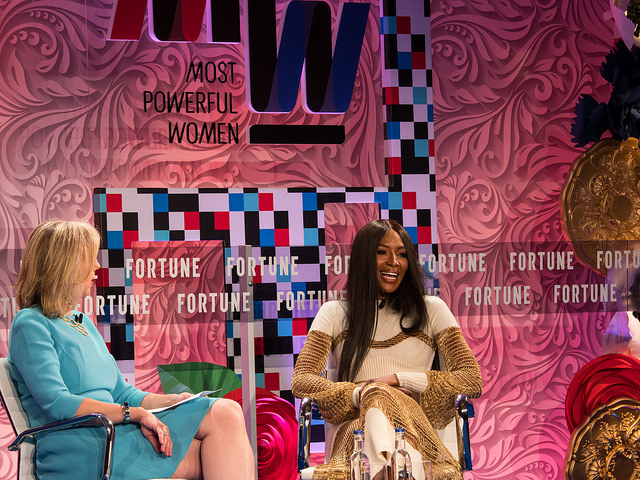 Naomi Campbell has spoken out about her battle with substance abuse and how she took on Piers Morgan when he published articles in British tabloid the Mirror that exposed that she was receiving treatment for her drug addiction.

The English supermodel said she has “never ever” felt ashamed of her history with narcotic abuse. “I worked so much and at the beginning I never took a break ever,” she told the Fortune Most Powerful Women International Summit in London on Monday. “Finally, I said ‘I want it to go away’ and I chose to pick up the phone and make that call and I chose the place I wanted to go.”

Campbell said that when she arrived in rehab she “loved” it. “My chore was to do the kitchen. I was treated the same as everyone else and I met all these people from all walks of life,” she told TIME’s editor-in-chief Nancy Gibbs in an on-stage interview.

The 47-year-old has had to fight for her right to remain anonymous in relation to her treatment for drug addiction multiple times. While in rehab she heard someone breaking her anonymity in a phone conversation and went to confront him. Then, in 2001, the Mirror published photos of Campbell attending a Narcotics Anonymous clinic.

“When [the then-editor of the Mirror] Piers Morgan outed me, he blocked everyone else’s face [in the photo]. He respected their anonymity, but what about mine?” Campbell asked. “So I decided to fight for my right to go to meetings. My friends told me to let it go but I couldn’t because I didn’t feel safe to go for help in my own country.”

Campbell then took Morgan and the Mirror to court over invasion of privacy and won. “Now it’s illegal to photograph someone coming out of a heath-care place,” she said, sounding proud of her achievement.

The London-born supermodel told the Summit attendees that she remains a member of an “amazing” Narcotics Anonymous group. “I have many friends [there], my phone is open 24/7 and if there is anyone who wants to reach me for that reason they can,” she said. “I reached out to people and people helped me. It doesn’t matter what walk of life—addiction and alcoholism doesn’t discriminate.”

Campbell said that growing up in front of the world’s press as she did, she was bound to make mistakes. However, she added, “I owned everything I did. Did I feel shame about certain things? Absolutely. Now I just accept [the way things are] and live in the day. I don’t know what’s going to come tomorrow and I don’t want to.”