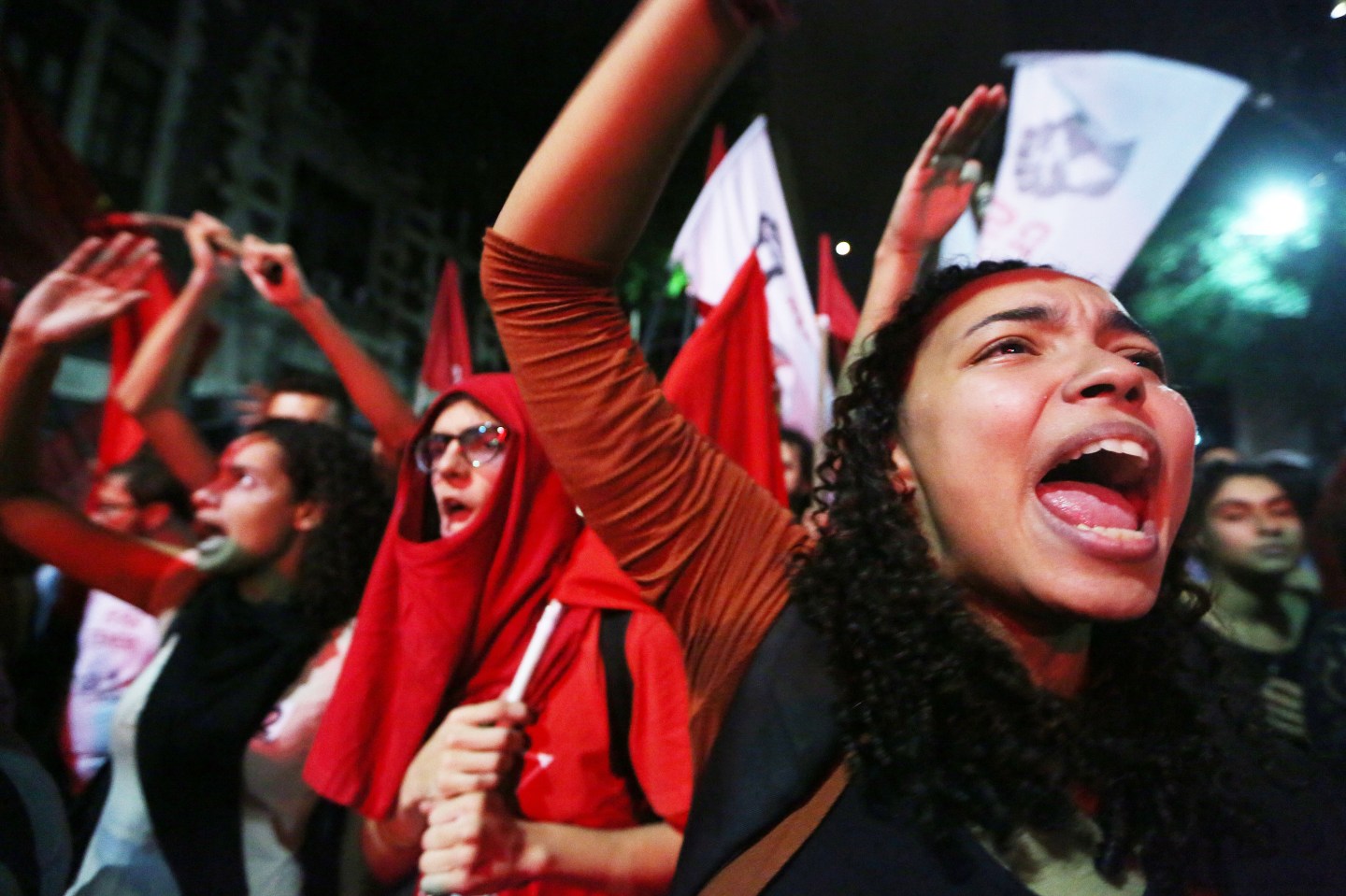 Brazilian markets plummeted on Thursday as allegations that President Michel Temer condoned bribes to silence a key witness deflated investor optimism about the prospects for his ambitious pension and labor reform agenda.

Brazil’s benchmark Bovespa stock index closed 8.8% lower, its biggest daily decline since the 2008 financial crisis. Trading had been halted for an hour after a 10% drop triggered a circuit-breaker mechanism.

The declines slashed $7.7 billion off the market values of Itaú and Petrobras.

“Brazilian stocks and assets and their currency have rallied very strongly up until really today. It’s a big pullback and … it at least brings the risk up to the surface again,” Alliance Bernstein Managing Director of Equity Product Management Eric Sprow said.

The report threatened to torpedo a two-year rally in Brazilian assets as traders quickly reassessed the chances of success for efforts to streamline the country’s social security system and reform labor regulations. As a result, policymakers’ attempts to curtail the growth of public debt and foster economic growth may also be in doubt.

Strategists at J.P. Morgan Securities and UBS Securities downgraded their recommendations on Brazilian equities to “neutral,” citing increased risks to the implementation of structural reforms.

Trader Thiago Castellan at São Paulo-based Renascença brokerage said: “For the market, it’s not a question of whether Temer will be ousted or not. The question is whether it will be quick and for how long reforms will be delayed.”

Temer denied the allegations on Thursday, saying he will not resign. His remarks disappointed traders who had hoped for a swift resolution to the political crisis, putting renewed pressure on Brazilian stocks and currencies going into the close.

The Brazilian real slumped 8% to 3.38 reais per U.S. dollar, the biggest percentage drop since the currency was devalued in 1999, wiping out its gains in 2017, while bond prices tumbled.

Strategists at Credit Suisse Securities revised forecasts for the Brazilian real, saying the reform agenda was likely to be put on hold. They expect the currency to weaken to 3.50 in three months and 3.70 in 12 months, compared to 3.20 and 3.50 previously.

The sharp moves drove the market operator B3 to widen the limits on trading of several derivatives and put policymakers on alert.

The central bank sold $4 billion worth of new traditional currency swaps, increasing the stock of outstanding swaps by nearly a fourth from the current $17.7 billion.

Over the last two years, the bank has acted to reduce the amount of swaps, which function like future dollar sales to investors, from more than $100 billion by late 2015, to cut taxpayers’ exposure to currency moves and limit market imbalances.

The National Treasury also swept to action, calling off an auction of fixed-rate and floating-rate bonds scheduled for Thursday and offering to buy or sell local notes in three extraordinary auctions in coming days.

Yields paid on Brazilian interest rate futures spiked as traders bet the central bank would be forced to cut rates at a slower pace as the reforms outlook dimmed.

Rate futures prices indicated traders saw a 79% chance that the central bank would cut the benchmark Selic rate by 50 basis points this month and a 21% chance of a 75 basis-point reduction. On Wednesday, most bets pointed to a cut of 125 basis points.