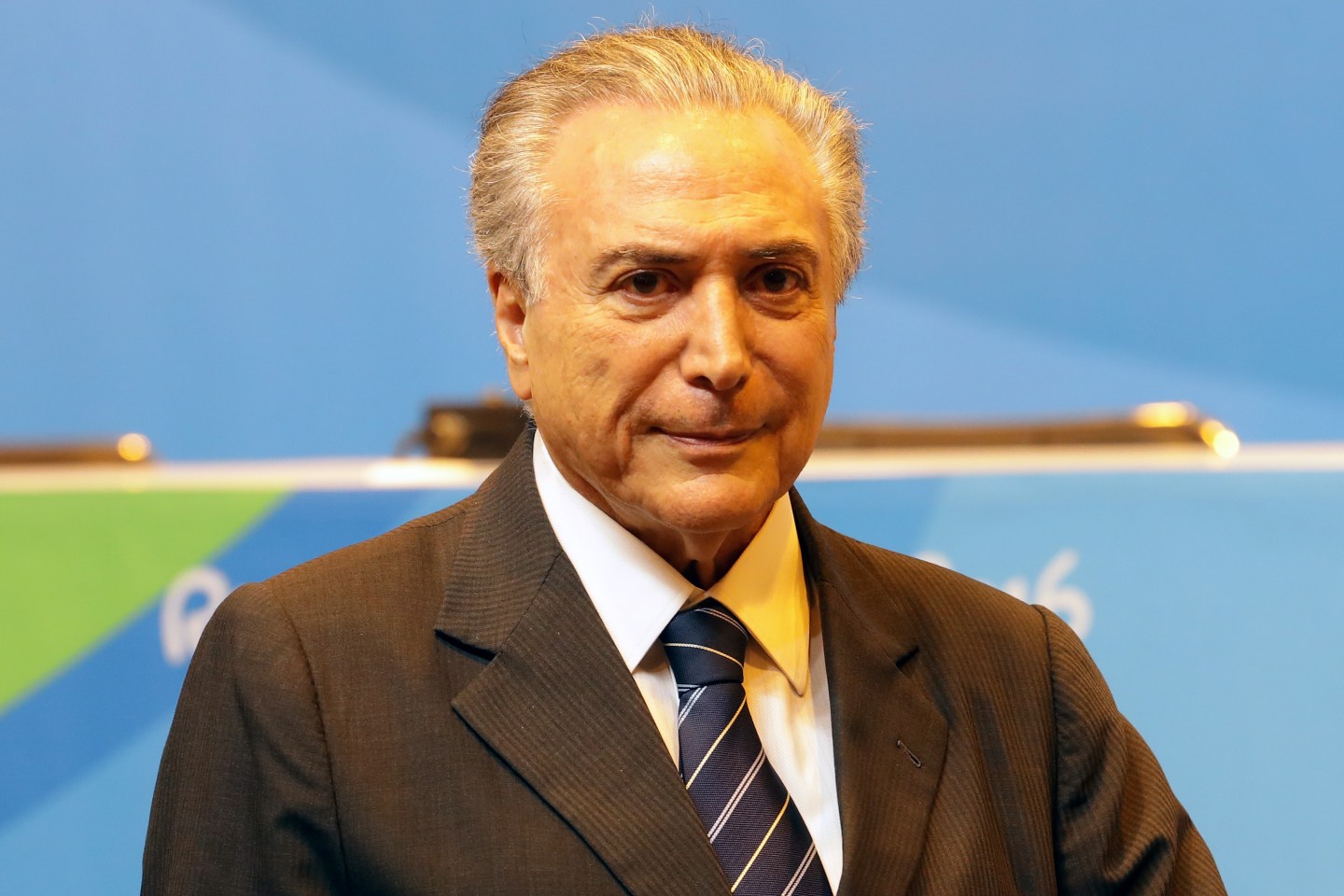 Michel Temer speaks to the media at the Main Press Centre of the Rio 2016 Olympic games, August 18, 2016.
Chris Graythen—Getty Images

Brazilian President Michel Temer gave his blessing to an attempt to pay a potential witness to remain silent in the country’s biggest-ever graft probe, according to plea bargain testimony by a powerful businessman, newspaper O Globo reported on Wednesday.

Temer’s office on Wednesday acknowledged he had met in March with the businessman, Chairman Joesley Batista of meat giant JBS SA, but denied any part in alleged efforts to keep jailed former House Speaker Eduardo Cunha from testifying.

O Globo‘s report, which three sources familiar with the matter said was accurate, threatened to pull Temer into a corruption scandal that has already entangled several of his closest allies and advisors.

Leading lawmakers and a third of Temer’s cabinet have already been caught up in an investigation of systematic bribery in return for political favors and contracts with state-run enterprises. But news that the president himself may have been party to a cover-up shook the scandal-weary nation.

Investors dumped Brazilian assets in foreign markets after the news broke late in Brazil, as the prospect of Temer becoming enmeshed in a fresh political crisis clouded the prospects for his unpopular reform agenda, considered key to ending a deep recession.

Scattered protests sprang up in front of the presidential palace and along Sao Paulo’s main avenue as opposition lawmakers and even a high-profile ally called for Temer to step down.

“Given the gravity of the situation and the responsibility to keep Brazil from plunging into the imponderable, the only option is for President Michel Temer to resign,” said Senator Ronaldo Caiado, leader of the government-allied Democratas party in the Senate.

JBS, the world’s biggest meatpacker, declined to comment. A senior JBS executive said there had been no formal communication about the matter within the company.

While the O Globo report described an unprecedented sting operation mounted by Brazil‘s federal police in conjunction with senior JBS executives to snare several politicians, Temer was the one target that towered over the rest.

Batista used a hidden device to record an alleged discussion with Temer about hush money the executive was paying to Cunha, according to the newspaper. The report did not say what Cunha was asked to keep quiet about.

When Batista told Temer he was paying Cunha to remain silent, the president was recorded saying, “You need to keep that up, okay?” according to the newspaper, which did not say how it had obtained the information.

Cunha, once a powerful member of Temer’s ruling party, has previously said he had compromising information about several senior politicians linked to a vast political bribery scandal at state oil firm Petroleo Brasileiro SA, or Petrobras.

Temer’s office said in a prepared statement that he “did not participate in or authorize any activity with the aim of avoiding a plea bargain or collaboration” by Cunha, adding that the president supported a full investigation of the allegations.

An exchange-traded fund tracking Brazil‘s benchmark Bovespa stock index fell more than 8% in Tokyo, while American depositary receipts for Petrobras fell as much as 11% in after-hours New York trading as investors ditched Brazilian assets at the sight of more political turmoil.

Despite his extreme unpopularity among Brazilian voters, Temer has maintained a broad majority in Congress, but analysts said public outrage over the scandal could change the political equation.

“If the recordings are confirmed, Temer would have to defend his mandate on multiple fronts,” said political analyst Thomaz Favaro of the consultancy Control Risks, citing the danger of public pressure for Temer’s resignation, lawmakers’ calls for impeachment and a possible investigation by the nation’s top prosecutor.

“The development thus substantially increases the risk of an unscheduled government change in Brazil before the 2018 general elections,” Favaro told clients in a note.

The crisis underscored the extent to which Brazil‘s political agenda is being dictated by an increasingly fearless generation of corruption-fighting police and prosecutors.

With the collaboration of the Batista brothers, police used hidden cameras and tracking chips in bags of cash to record a series of bribes to politicians, according to O Globo.

In one case, the paper said Temer was recorded suggesting Congressman Rodrigo Rocha Loures could resolve an unspecified issue for the holding company of JBS. Loures was then filmed receiving 500,000 reais ($160,000) sent by Joesley Batista.

Representatives for the congressman said he would clarify the matter when he returned on Thursday from a trip to New York.

Senator Romero Juca, the head of the government’s coalition in the Senate, said the accusation was one of many that would be investigated, but it would not slow Temer’s ambitious reforms.

The JBS executives’ plea bargain agreement, including a fine of 225 million reais ($72 million), is being overseen by Supreme Court Justice Edson Fachin, who is responsible for the bribery investigation known as Operation Car Wash, according to O Globo.