The VC Who Didn’t Dare Call Herself a VC 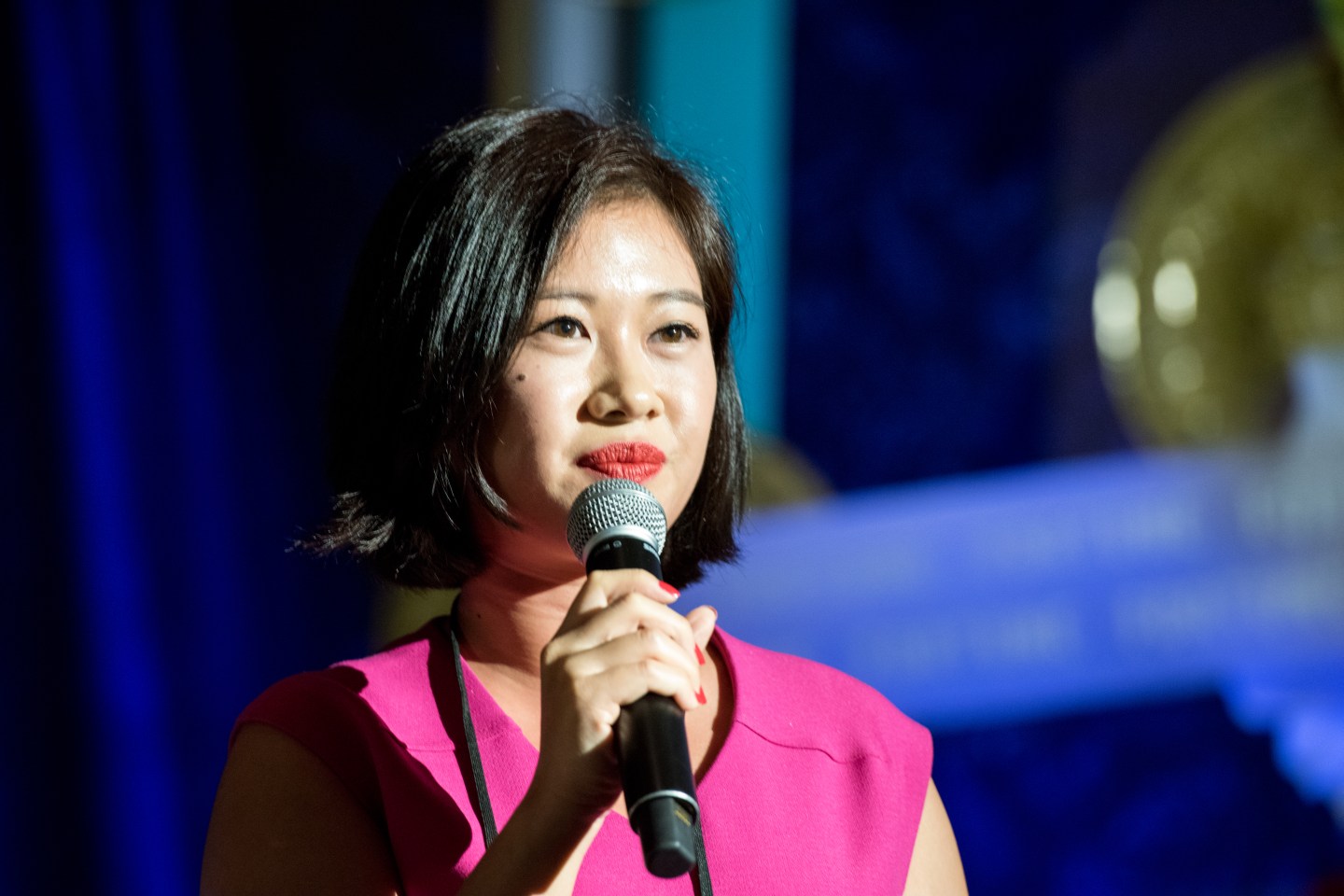 Two years ago, Pocket Sun hardly saw herself as an entrepreneur, much less a venture capitalist who spent all day working with founders.

“Venture capital to me, back then, was like, I couldn’t even get an internship,” Sun, now 25 years old and a founding partner of SoGal Ventures, told Fortune in a recent interview in Singapore. “There was no way that I had the dream to start a venture capital firm.”

SoGal bills itself as the world’s first female millennial-led cross-border VC firm, which targets investments in early-stage startups in the U.S. and Asia with female founders, otherwise diverse founding teams, or a primarily female customer base.

Sun, the breezy, bob-sporting Chinese co-founder who has been championed by the press, is now a fixture on the conference circuit, including speaking at Fortune’s Most Powerful Women International Summit in Hong Kong. She says she initially started SoGal as a community group inside a University of Southern California classroom, after noticing that hardly any of the guest speakers in her entrepreneurship classes were women. The simple premise was for “female entrepreneurs to get together, share stories, and help each other,” she says.

Since then, the forums have expanded in size and scope. Sun scrolls down her phone to pull up SoGal’s various groups on WeChat—a popular messaging and payment app in China—where discussions among hundreds of members range from sounding off on articles about workplace diversity to debates on egg freezing and whether investors should ask female entrepreneurs if they want to have kids.

“We have a Shanghai group, we have a Beijing group, London group, New York, San Francisco, L.A.,” says Sun. “There have been a lot of meet-ups. It’s like, SoGal Squad. It’s everywhere.”

Sun and her co-founder, Elizabeth Galbut, decided to start the firm just months after receiving their master’s degrees, saying they were emboldened by the mentorship they’d received at a two-week venture investment program with 500 Startups and Stanford University.

“We were the youngest, most inexperienced people in the class. Everyone else had done dozens of deals,” says Galbut, a Johns Hopkins University MBA.

According to Galbut, Sun raised her hand and asked, “What should I do to get into VC?” To which they returned: “Build the firm that embodies the cultural values that you want to see in the world.”

“We both kind of looked at each other and were like, ‘Mm. That’s a good idea,’” says Galbut.

The two saw it as a balanced partnership: They both wanted to unite on a longstanding problem for female founders, who, back then in 2015, only received 2.76% of VC funding compared to their male counterparts. (That proportion has since declined to 2.19%, according to Pitchbook.) One was soon to be based in Singapore, the other in New York. And while Sun busied herself broadening her network, Galbut was already forming a fund to connect student and alumni-led startups from her university with Silicon Valley investors.

“It was really meant to be,” says Sun. But with little to no resources, their journey became less about eureka moments than about establishing trust—both with others and in themselves. “It took us many months to think about the plan: like, ‘How can we start a VC firm? Is that even feasible? How do we even start?’”

Sun says when she first began making investments, she literally had to pitch entrepreneurs she knew to take her money. Her lowest contribution, as an angel investor, was $1,000 from personal savings.

“I said, ‘Can I invest in your company as a token of commitment, so I can keep contributing to your success?’” Sun says.

The founders replied, “Well, the amount is too small. We will have to ask our lawyers about it.”

Those who were baffled by the newly minted investors didn’t go to lengths to hide it. Galbut says one particularly scarring meeting with a male investor essentially turned into him berating her for an hour.

“He kind of just said, ‘I don’t know who you think you are. You should not be a venture capitalist,’” she says. “They would just be so harsh and so mean … I even left my umbrella in the room.”

For Sun, it took a long time to even feel comfortable telling people about the firm. “For a while, I did not dare to call myself a VC,” she wrote in a Medium blog post.

“I was super intimidated by the male investors that I met. Because they all acted in a way, you know, ‘Oh, you want to be a VC? Oh, how are you going to do that? Oh, that’s interesting,’” she tells Fortune. “It would just cause a storm of questions about my qualifications and credentials, which I barely had.”

Talking to her parents, who hailed from a working-class background in Shandong, China, didn’t exactly inspire confidence either. When Sun told her father about the fund, “he was so worried. He was like, ‘I’m not even sure if I want to invest in something like this, because it’s too risky,’” she says. “In China, being a female entrepreneur is actually a very niche-y thing, and it’s not mainstream.”

While Sun says her father has been supportive, he definitely groans at her proclamations of breaking barriers. “He gets very cautious whenever I say, ‘I’m going to change the world.’ He’s like, ‘Ugh. Can you stop saying that?’”

The turning point, Sun says, has been establishing a track record. SoGal had its first close in January, and Sun and Galbut have collectively invested in 31 companies so far—three under their firm, and the rest as angel investors or under Galbut’s other fund, A-Level Capital. SoGal is currently aiming to raise $15 million by early 2018.

As it turns out, being an outlier would become one of SoGal’s most compelling sales pitches. As female VCs who were virtually “the same age” as their entrepreneurs, SoGal benefited from positioning itself outside the Valley’s typical gender and generational gap, according to Sun.

“So many venture capitalists hated themselves after missing Snapchat, because they thought, ‘Ha, what the heck is Snapchat?’’’ she laughs. “There are things that we could see that others don’t.”

Entrepreneurs at some of SoGal’s portfolio companies say that the women’s relatability allows for a more convivial investor relationship.

“With Pocket, it’s more of a laidback mindset, and it actually makes us more comfortable and allows us to share more,” says Jeffrey Liu, co-founder and CEO of GuavaPass, a fitness class subscription company based in Singapore. “It’s definitely different.”

Jennifer Mellon, co-founder and president of Trustify, a platform for private investigator services based in Washington D.C., says she’s gone through the “the horror story” many women encounter at meetings with potential investors. “I’ve heard that ‘I’m not sure how I feel about you being a mom,’” she recalls. “You start getting very defensive, and then I’m like, ‘That’s just a waste of energy.’”

Mellon says that she and her husband, who is a co-founder, signed SoGal on “because they align with what we care about.”

“I imagine if something hit the fan, I would have zero qualms about telling Elizabeth. That is valuable,” she says. “We are friends. I’m not trying to make things a certain light with her, and it becomes a super supportive space.”

Another selling point for startups is SoGal’s emphasis on investing across national borders and in non-traditional startup centers—something its founding partners insist should be a necessity for all VC firms today. “Our generation, the millennials, or whatever you want to call them, they are different. We are so well-traveled, and we have lived in so many different places, we speak so many different languages,” says Sun.

Many traditional investors don’t get that. Mellon says she’s been told by traditional VCs that “the only reason we’re passing is you’re not here. You’re not in the Valley.”

SoGal, of course, is only too happy to fill the voids in the meantime. “When you are young and new, and you have a fresh, new perspective in the old, non-moving industry, I see it as a huge advantage. And if you don’t see it, that’s fine. You’re not my target audience and I don’t have to convince you,” says Sun.

“When these mainstream VC firms finally wake up to the fact that ‘maybe I should invest in more women,’ they’re already too late. And they could not do it any better than us.”