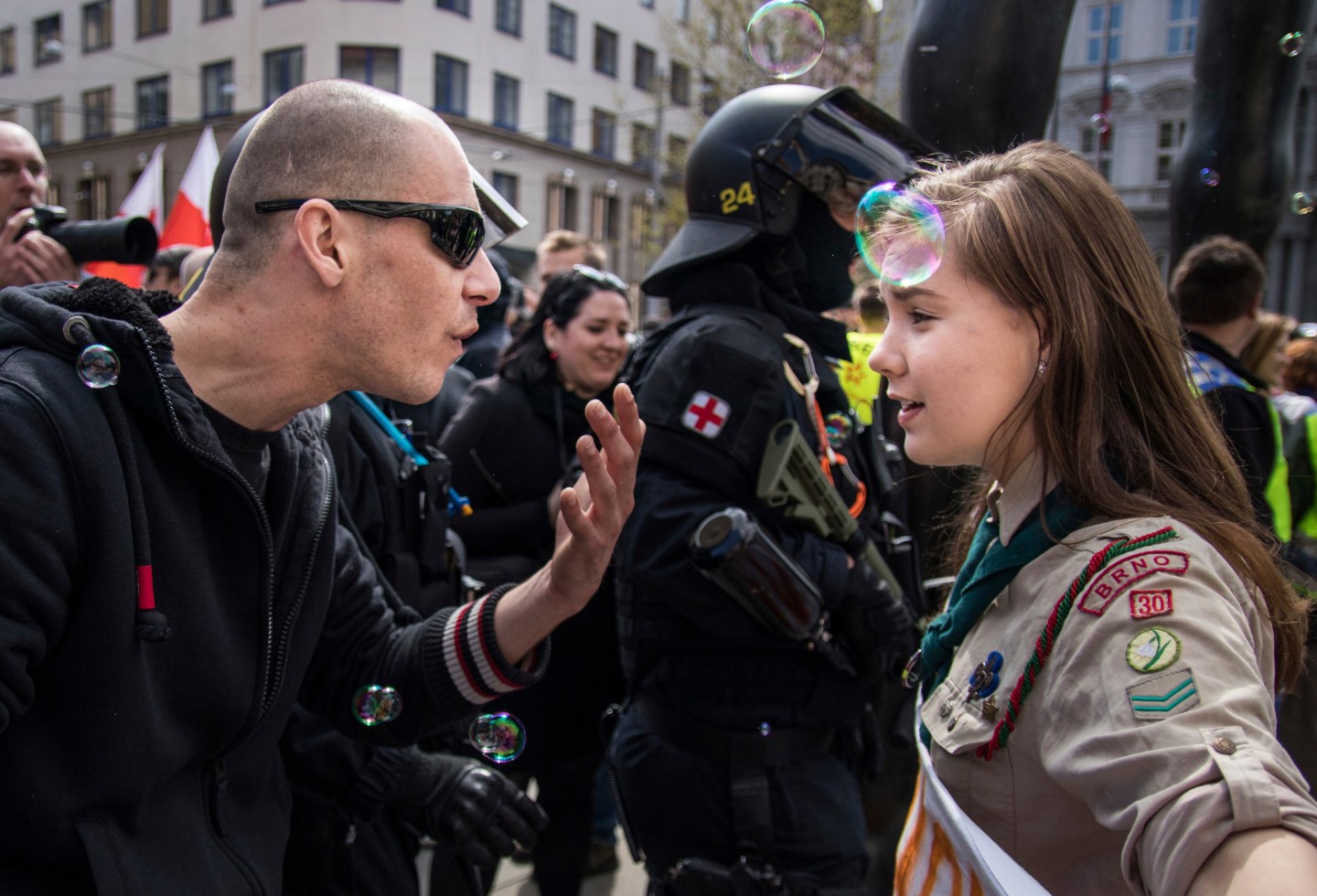 In this picture taken in Brno, Czech Republic, Monday, May 1, 2017, 16-year-old Lucie Myslikova talks to a protester at a right wing demonstration. The Czech teenager was among some 300 protesters who confronted a rally of the far right Workers Party of Social Justice on May Day in the second largest Czech city of Brno. (AP Photo/Vladimir Cicmanec)
Vladimir Cicmanec — AP

A photograph of 16-year-old girl scout Lucie Myslíková staring defiantly at a right wing protester during a May Day counter-protest in the Czech city of Brno quickly went viral Thursday, with Myslíková drawing widespread praise for calmly confronting the demonstrator.

“I wasn’t afraid,” Myslíková told the BBC, explaining that she had argued with the unnamed man in the photograph over immigration and refugees. According to Myslíková, the man told her she would be raped by the migrants she was hoping to save.

“I went to the counter-demonstration as someone who was determined to change things,” she said. “You ask me if standing up to skinheads should be left to older people—well us, younger people, are going to be living here a lot longer than the older generation.” She was one of a number of girl scouts who rallied against a neo-Nazi demonstration in the city on Monday, outnumbering the far-right protesters about two to one.

While the snapshot of Myslíková courageously taking a stand is remarkable enough on its own, it is particularly noteworthy as part of an emerging genre of newly iconic photos that show young women around the world standing up to injustice.

In April, Saffiyah Khan was captured smiling in the face of an angry far-right English Defense League protester in Birmingham, U.K. She stepped forward to defend 24-year-old Saira Zafar, whom protesters were harassing because of her headscarf.

In July 2016, a photo of Ieshia Evans standing calmly in a billowing summer dress before policemen in full combat gear during Black Lives Matter demonstrations in Baton Rouge, Louisiana, earned wide praise as the ultimate manifestation of “grace under pressure” and elegant defiance.

In May 2016, Swedish activist Tess Asplund was photographed in a similar pose, fist raised in the air as she stared down a uniformed march of neo-Nazis.

The list goes on. Taken together, the images of Myslíková, Khan, Evans, and Asplund carry an important message, which is that young women are on the frontlines of the fight to defend women’s rights, freedom of expression, and civil liberties the world over.