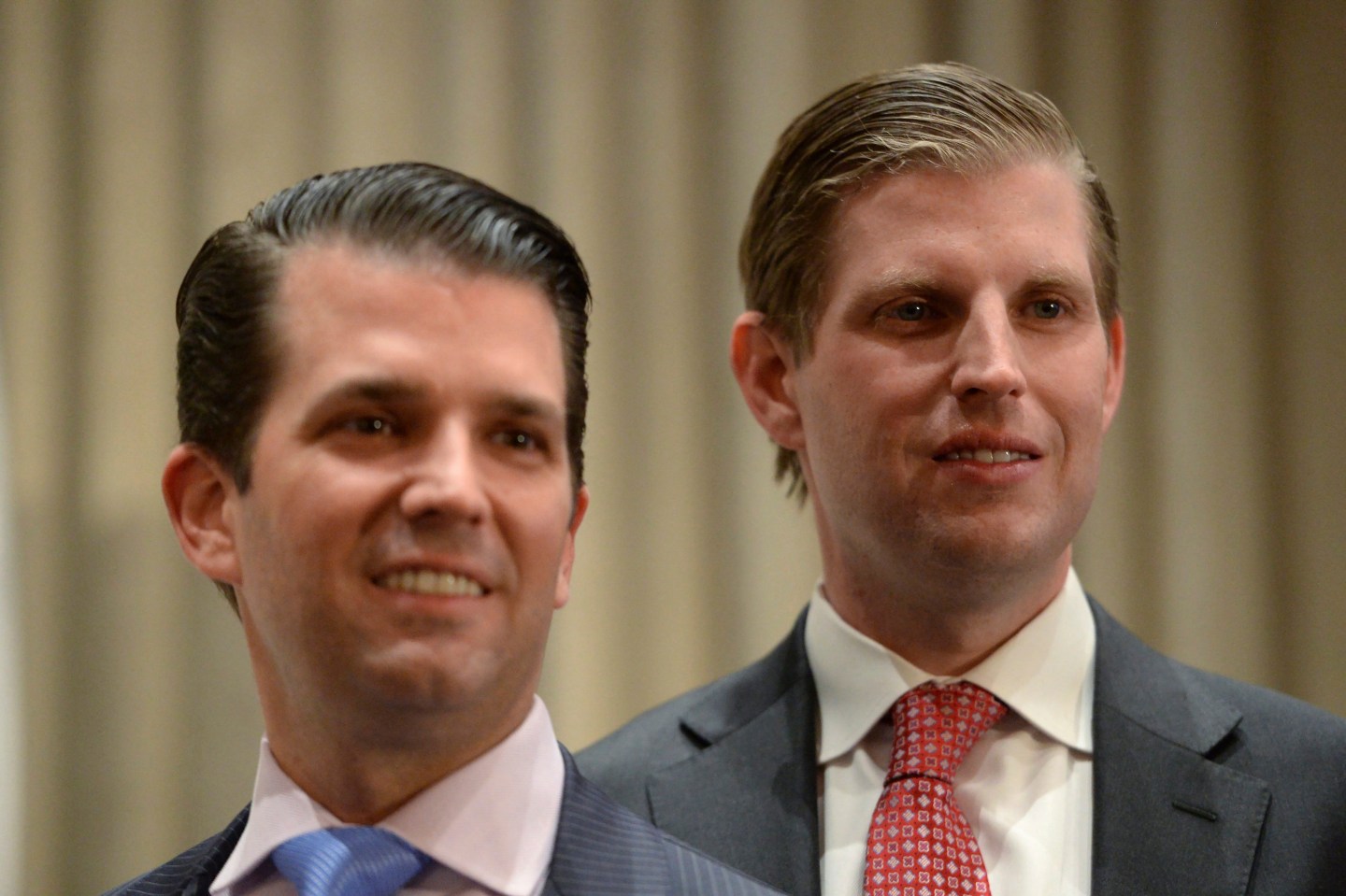 FILE- In this Feb. 28, 2017 file photo, Donald Trump Jr., left, and his brother Eric Trump attend the grand opening of the Trump International Hotel and Tower in Vancouver, B.C., Canada. Apprentices no more, Eric Trump and Donald Trump Jr. are now at the helm of the Trump Organization and adjusting to the reality presented by their father's presidency. (Jonathan Hayward/The Canadian Press via AP, File)
Jonathan Hayward AP

Apprentices no more, Eric and Donald Trump Jr. are now at the helm of the Trump Organization and adjusting to the reality presented by their father’s presidency. They’re eyeing ways to use the new lease on the family fame by expanding the brand into parts of the United States that embrace him.

Some business has slowed as a result of the pledge to stall international dealmaking while Trump is president. But a U.S. push is planned, and two new hotel chains are being considered — a four-star brand and a less luxurious line — possibly in states where Trump triumphed over Democrat Hillary Clinton last November.

“I think it makes it naturally easier if you’re going into a place that’s not adversarial to you,” Donald Trump Jr. said in a recent interview.

Eric Trump: ‘Nepotism Is Kind of a Factor of Life’

The Trump Organization is a private, family-run business that owns billions of dollars’ worth of hotels, office buildings, golf courses and management and licensing agreements. Although foreign deals are on hold, the company will complete existing projects, including ones in India, the United Arab Emirates and the Dominican Republic.

Because overseas markets have been hotter for the Trump brand, the company could lose some new revenue, the president’s sons suggested.

Last fall, the company announced the creation of a four-star hotel chain called Scion, which is meant to offer upscale service in U.S. cities that could not support a full-fledged Trump luxury property. More than two dozen letters of intent have been signed, though no ground has been broken yet.

Among the possible locations being considered: Texas, parts of the South, and perhaps the nation’s capital, where the hotel would exist with the Trump luxury property in the former home of the Old Post Office not far from the White House. The company is also in the very early stages of considering a three-star hotel chain.

Experts said the plan would not seem to run afoul of any ethics standards, even if the hotels ended up in some of the economically depressed regions whose voters rallied for Trump and may not be able to afford a luxury brand. It would be no different from cashing in on the name of a nonpolitical celebrity, they said.

Similarly, daughter Ivanka Trump has made a pitch for Trump’s blue-collar supporters by replacing her high-end jewelry line with a mass-market brand.

“It would not seem to blur any lines with the presidency,” said Kathleen Clark, a law professor at Washington University. She said that while “questions can be raised” about some of some of company’s behavior, a pitch into Trump-friendly states seems like “a reasonable business strategy.”

Any new investment, particularly if it involves foreign funds, will face additional scrutiny, including a review by an in-house and outside ethics counsel, Donald Trump Jr. said.

“It’s a complicated procedure that changes the dynamic. There are plenty of deals that two years ago or eight years from now, ‘Oh, yeah, you can do this,'” he said. “Today, we have to take that much more seriously. There is an optical component that has to be taken into account.”

He bristled at the idea that his father ran for president to enrich himself or his family, as some critics contended during the campaign.

“He spent $75 million of his own money to run against 17 incredibly seasoned Republican candidates to then go against Hillary Clinton,” Donald Trump Jr. said. “No one in their right mind would do that. That’s not a good business model! I get it, it sells papers, it creates headlines. But it’s ridiculous.”

Donald Trump Jr. said he barely spoke to his father during his first weeks in office. That changed after the younger Trump’s 5-year-old son, Tristan, was hurt in a skiing accident.

Eric Trump said he does talk to his father more regularly but insists that any discussions about the family business are limited to broad strokes and adheres to the guidelines the president laid out in January.

“We don’t talk about the business. At most it’s ‘How’s Turnberry? Turnberry’s great,'” Eric Trump said, referring to a Trump golf property in Scotland. He would tell his father, if asked, “A profit or loss in a quarter, that’s it.”

Experts disagree, noting that it is not a true trust structure because Trump retained ownership of the company.

Science March: Is it about Science, or Politics?

“As long on President Trump insists on owning the Trump Organization, the conflicts of interest that may occur run directly to him and the so-called firewall plays no role in preventing them,” said Fred Wertheimer, head of the ethics watchdog group Democracy 21. “It’s an illusion and does not protect the American people.”

Both Eric and Donald Trump Jr. said they missed their father’s presence. Eric Trump said he sometimes looks upon the stack of $1 bills that he won during a series of friendly business bets with his father.

The winner would give the other a dollar bill with a note scrawled upon it. The elder Trump would use the bills, or a newspaper clipping about a Trump property, as a means of communicating to his sons, and his trademark scrawl would carry his congratulations — or his wishes — to those he was training to someday lead his company.

“It was his way of saying ‘Get this done’ or ‘Great job, ET – this is going to be amazing,'” said Eric Trump. “It’s a simple way of communicating but I learned a lot. I miss that.”