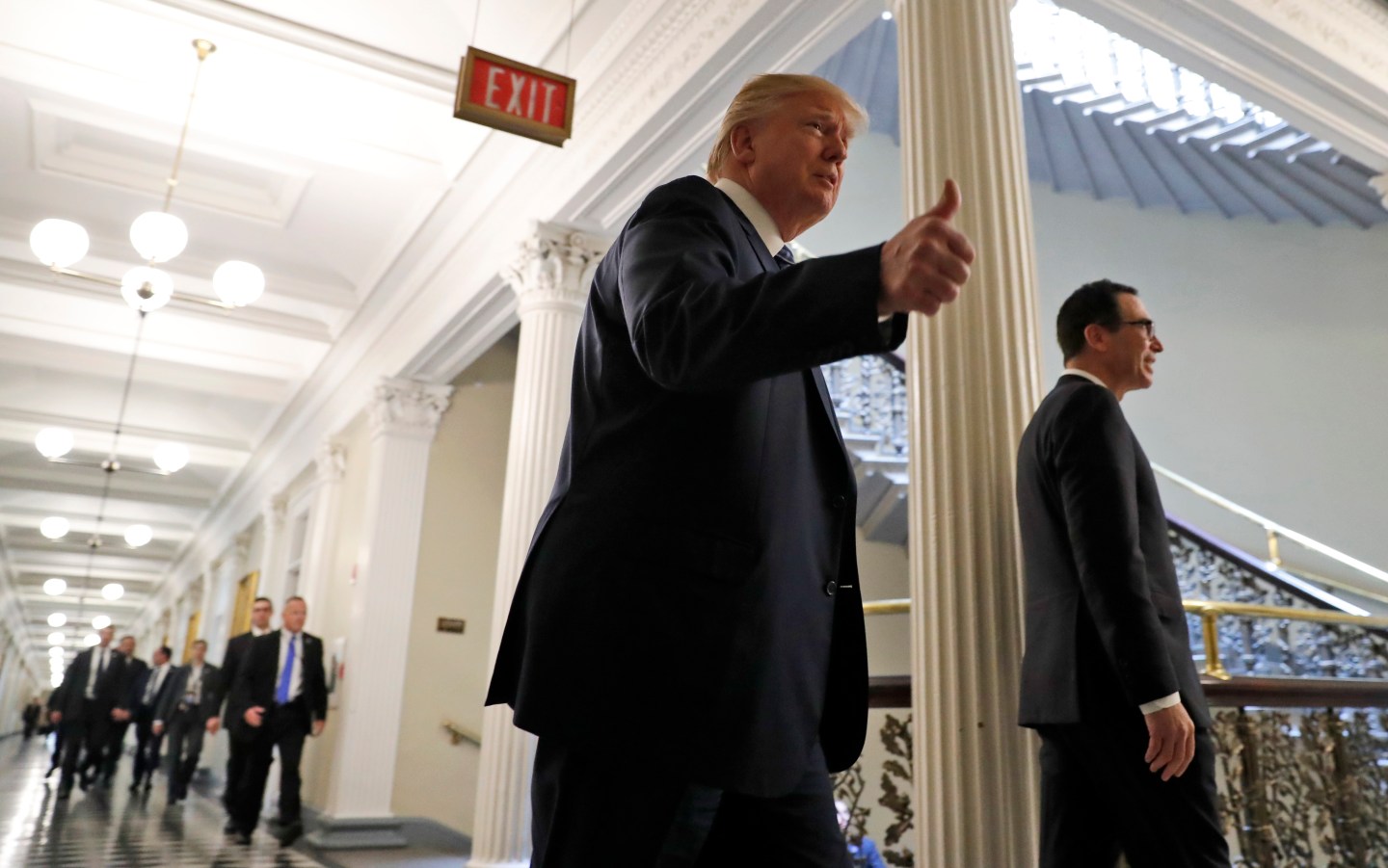 Trump signed an executive order to review any major tax regulations set last year by his predecessor, as well as two memos to potentially revamp or eliminate fundamental elements of the 2010 Dodd-Frank financial reforms passed in the wake of the Great Recession.

“This is really the beginning of a whole new way of life that this country hasn’t seen in really many, many years,” the president said before signing the measures during his first visit to the Department of the Treasury.

The review of tax regulations could give greater leeway to companies looking to shelter income overseas, or simply seeking to reduce the time and money spent on completing personal and business tax filings.

“People can’t do their returns,” Trump said. “They have no idea what they’re doing.”

Treasury Secretary Steven Mnuchin said a “significant” issue to be examined will be Obama’s crackdown on inversions, which are mergers that enable U.S. firms to relocate their headquarters overseas where tax rates are lower.

The review could also touch on overlapping rules designed to stop foreign-based companies from shifting their U.S. profits abroad, another Obama initiative from 2016.

The administration is also trying to pass tax reform that would reduce corporate and personal rates. Trump told The Associated Press in an interview that a plan will be released as early as Wednesday.

The two memos focus on possible adjustments to the Dodd-Frank law, which was designed to stop banks from growing “too big to fail” and requiring public bailouts.

But Trump claims the regulations have had the opposite effect, while also limiting access to credit for many Americans.

“These regulations enshrine too big to fail and encourage risky behavior,” Trump said.

One memo orders Mnuchin to review a component of the law that allows federal regulators to liquidate failing financial firms during an economic crisis if those companies are large enough that their collapse would pose a threat to the economy.

The other memo orders the Treasury to review a process that designates which non-bank firms could threaten the financial system if they fail. Critics argue this process is costly and arbitrary.

Both measures will be suspended while they’re under review.

Mnuchin said taxpayers won’t be left on the hook.

“Let me make it absolutely clear: President Trump is absolutely committed to make sure that taxpayers are not at risk for government bailouts of entities that are too big to fail,” he said.

His report will explore if it would be better to liquidate troubled financial firms through a modified form of bankruptcy.

Federal Reserve Vice Chairman Stanley Fischer said in a Friday interview with CNBC that there are aspects of the Dodd-Frank law which if taken away would have “potentially serious impacts on the economy, not immediately, but when times get tough.”

“Taking actions which remove the changes that were made to strengthen the structure of the financial system is very dangerous,” Fischer said.

Former Fed chair Ben Bernanke argued in a February blog post that there is no provision for the government to inject money into a failing firm as was done during the 2008 financial meltdown. This means that all losses would be borne by private investors.

Also, Bernanke said his experience is that financial regulators are often better equipped to respond to these emergencies than bankruptcy judges.

Mnuchin suggested Friday that it might be necessary to update bankruptcy laws to accommodate collapsing firms during an economic crisis.