Nicola Sturgeon Says the U.K. Snap Election Is a Vote on Scottish Independence 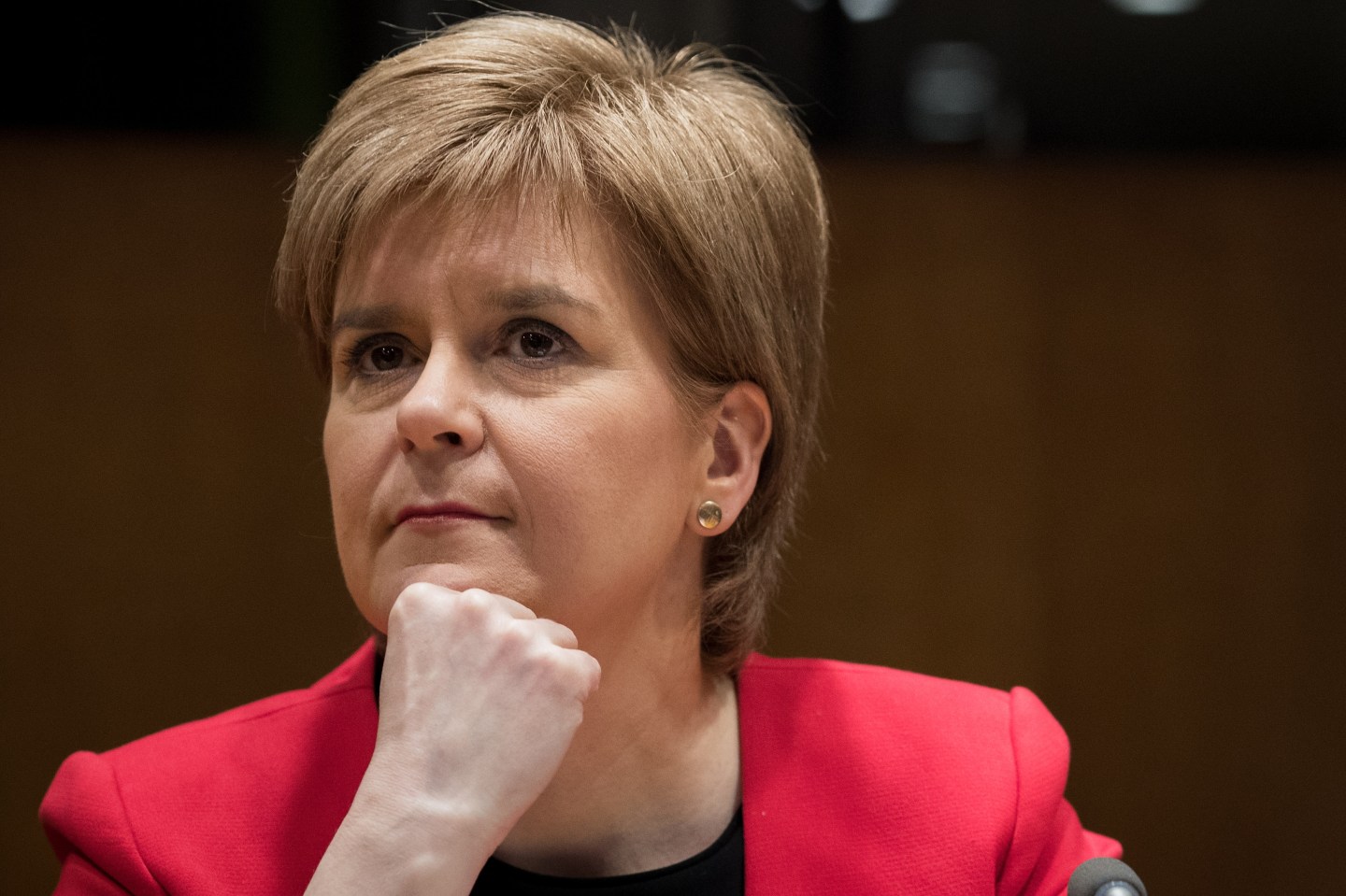 NEW YORK, NY - APRIL 5: First Minister of Scotland Nicola Sturgeon attends an event concerning the support of women in conflict, at U.N. headquarters, April 5, 2017 in New York City. Sturgeon is in the middle of a five-day visit to the United States. (Photo by Drew Angerer/Getty Images)
Drew Angerer Getty Images

In a statement on Tuesday, Sturgeon called May’s unexpected announcement “one of the most extraordinary U-turns in recent political history,” and called upon her colleagues in the Scottish National Party to “work harder than ever to retain the trust of the people” in the lead-up to the vote. “In terms of Scotland, this move is a huge political miscalculation by the prime minister,” she said.

May hopes the snap election will strengthen the Conservative Party’s representation in parliament, making way for a potential 200-seat lead over the Labour Party. But the vote could also benefit her agenda by quelling speculation about Scottish independence. “[T]he decision facing the country will be all about leadership,” May said in a statement on Tuesday. “It will be a choice between strong and stable leadership in the national interest, with me as your prime minister, or weak and unstable coalition government, led by Jeremy Corbyn, propped up by the Liberal Democrats, who want to reopen the divisions of the referendum, and Nicola Sturgeon and the SNP.”

Sturgeon was quick to cast the snap general election as a referendum on the strength of the SNP’s cause. “The question of what kind of country we want to be is going to be very much at stake in this election campaign,” she told BBC. “And whether we want it to be a country the future of which is steered by a Tory Party moving ever more to the right, or whether we want the people of Scotland to be in charge. This is an opportunity to make Scotland’s voice heard.” SNP Deputy Leader Angus Robertson framed the vote as a choice between May’s Tory party and Sturgeon’s SNP.

Sturgeon and May met last month in Glasgow, where May told Sturgeon that “now is not the time” for a second independence referendum, urging solidarity in the midst of the Brexit process. The irony of those comments in light of the snap election announcement did not go unnoticed on Tuesday.

Sturgeon would need Westminster’s approval to hold the vote, according to precedent. The Scottish parliament backed her plans for a second vote on April 10, and Sturgeon was expected to announce plans next week to hold a referendum in spite of May’s rejections.

The SNP currently holds 56 of 59 Scottish seats in the House of Commons. Another strong performance by the SNP in June could provide Sturgeon with a mandate to hold a second referendum, but it will be difficult for the party to improve upon its 2015 showing. May could be betting that the snap elections might diminish the SNP’s representation in parliament; two of the SNP’s current seats are particularly vulnerable to challenges from the Conservative and Labour parties, according to the Guardian.

Mhairi Black, a 22-year-old SNP MP, said she would stand for re-election in June, despite calling parliament “depressing” and a “waste of time” last month.

Even if Sturgeon gets her way and another independence referendum is called, it’s not clear that it would pass. Currently, 57% of Scots say they would vote against independence, according to YouGov.