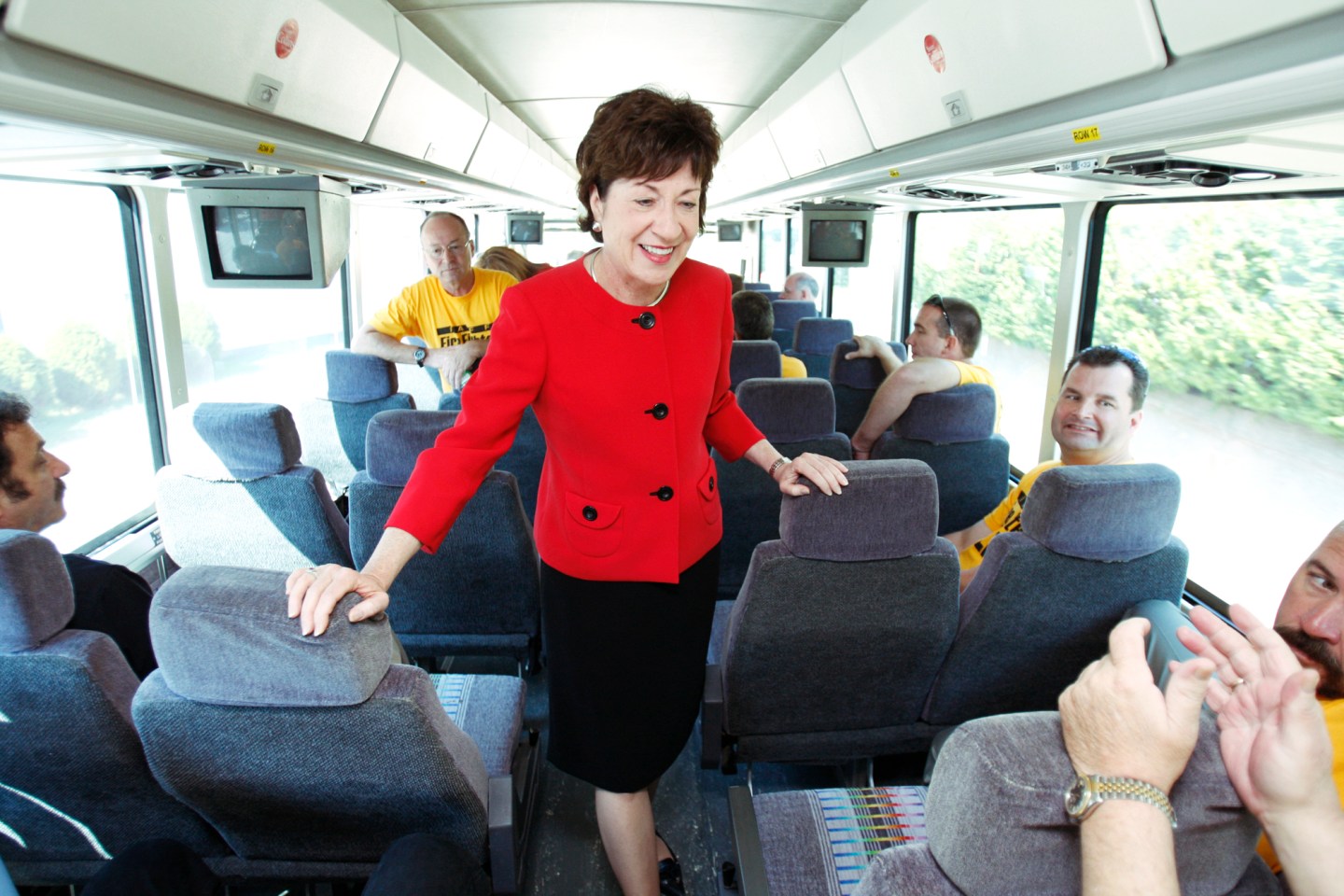 Maine Senator Susan Collins is seriously considering running for governor in 2018. Collins told the Portland Press Herald she will not make a final decision about entering the race until later this year, but her remarks on Tuesday were the most conclusive indicator of the moderate Republican’s future plans.

Asked about the gubernatorial race by the hosts of Portland’s WGAN news radio, Collins said, “Let me say that I am looking at where I can do the most good for the people of Maine. In the Senate, I now have significant seniority and that allows me to do a lot.” Collins has served in the Senate for 20 years. If she were to win the gubernatorial race, Collins would have to step down from her Senate seat two years before her term ends, leaving current Maine Governor Paul LePage—who has proudly described himself as “Donald Trump before Donald Trump became popular”—to appoint her successor. Current Maine law allows for a governor to appoint a replacement when a vacancy occurs before the end of a senator’s six-year term. Maine Democrats have introduced legislation that would change that, requiring a governor to call a special election to fill an empty seat, but the bill is unlikely to get past the state’s Republican senate.

“Coming to be governor, if I were fortunate enough to be elected … [I could] work on issues I care a lot about like economic development, jobs, education. And I would try to heal the state and bring people back together, which I think is important as well. So I’m trying to figure out where I can do the most good,” Collins said. “I’m being totally honest with you—I truly don’t know, I really don’t, it’s a hard decision.”

Collins, 64, previously ran for governor in 1994 and lost to her current Senate colleague Angus King, an Independent. King and Collins enjoy considerable popularity—they’re currently ranked fifth and sixth most popular, respectively, among U.S. senators. If Collins were to become governor of Maine, she would be the first woman elected to the post.

But if Collins leaves the Senate, she’d abandon the unique role she’s created for herself in the legislature, one that’s gained prominence since President Trump’s election. During her tenure in the chamber, Collins has often parted with the more conservative flank of the Republican party. She supports abortion rights, voted to expand background checks for gun buyers, and supported giving Merrick Garland, former President Obama’s Supreme Court nominee, a confirmation hearing. More recently, she refused to vote for Trump and opposed his travel ban. She’s drawn criticism from the right for leaning too liberal, and from the left for being slow to openly part with Trump and for supporting the confirmation of Supreme Court Justice Neil Gorsuch. She has pursued bipartisan initiatives, co-authoring a letter with Senator Chris Coons (D-Del.) last week to help preserve the filibuster as a legislative tool. The letter signified an apparent change of heart since Collins had joined Republicans in voting to eliminate the tactic to get Gorsuch quickly confirmed. She did participate in bipartisan negotiations to try and avoid having to pass the measure, but said in a statement that “there is so little trust between the two parties that it was impossible to reach an agreement.”

“The frenetic pace and turbulent political environment in Washington have prevented me from spending any significant time thinking through the pros and the cons [of running for governor],” Collins wrote in an email to the Press Herald. “I don’t expect that I will be making a decision until this fall. Regardless of what I decide, it continues to be an honor to represent Maine in the United States Senate.”

Some in Maine say Collins would be easily elected governor. In her 2014 race for Senate, she swept all 16 counties. She has a 67% approval rating and nearly $1 million in campaign funds already in hand, according to the Press Herald. The state has had dramatic gubernatorial races in the past two cycles, with LePage winning in 2010 and 2014 with less than 50% support after the Democratic and Independent parties split votes. LePage’s tenure—marked by xenophobic anti-immigrant rhetoric, racist comments, and statements like “we ought to bring the guillotine back” to punish drug traffickers—has wounded the state’s political climate. (LePage is barred from running for a third consecutive term, but he could pursue the office again in 2022.)

When Trump won the presidency, LePage said, “I think Susan Collins is done in Maine. I think her decision to go against the Maine Republicans really cooked her goose.”

Collins spokeswoman Annie Clark responded to the governor, saying, “Her goose not only hasn’t been cooked, it hasn’t even been plucked yet. In fact, her goose is alive and healthy and looking forward to many more years of service to Maine.”

A staggering 17 potential candidates are in the running for the governorship. According to the Bangor Daily News, “Given Collins’ popularity, a gubernatorial run would probably send many on both sides of the aisle scrambling away from the race.”

This article has been updated to clarify Collins’ position on eliminating the filibuster.