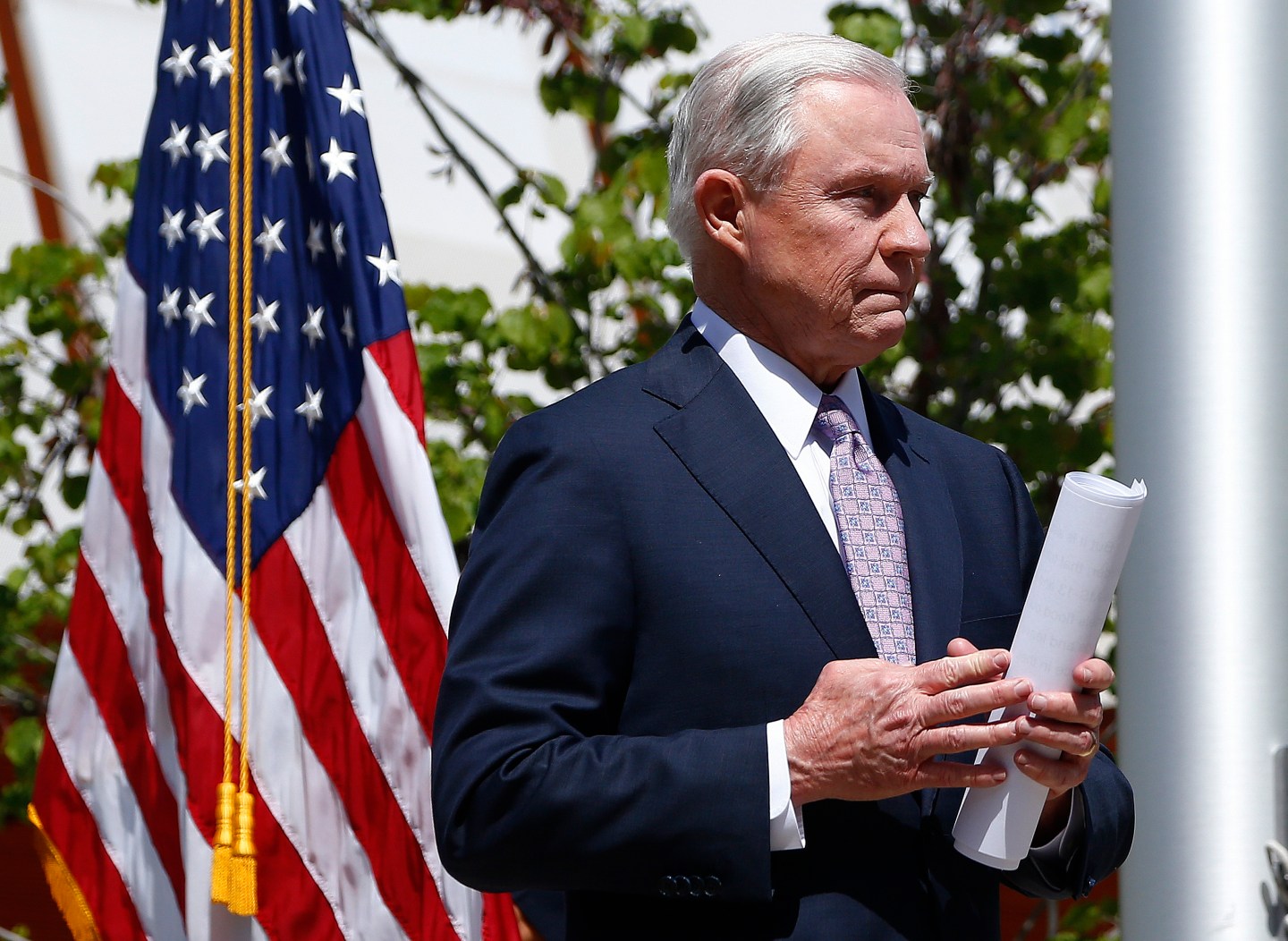 Attorney General Jeff Sessions toured the U.S.-Mexico border Tuesday and unveiled what he described as a new get-tough approach to immigration prosecutions under President Donald Trump.

The nation’s top law enforcement official outlined a series of changes that he said mark the start of a new push to rid American cities and the border of what he described as “filth” brought on by drug cartels and criminal organizations.

The tour included visiting a port of entry, where Sessions exited an SUV in a white shirt and baseball cap before entering a restricted area.

Sessions has been steadily expanding the Justice Department’s role in the anti-immigration agenda of the Trump administration, but the border trip offered the most comprehensive look yet at his plans.

During his visit, he urged federal prosecutors to intensify their focus on immigration crimes such as illegal border crossing or smuggling others into the U.S.

In a three-page memo, Sessions told U.S. attorneys to prioritize immigration prosecutions by appointing a border security coordinator who can oversee investigations, keep statistics and provide legal advice and training to prosecutors. The coordinators would meet regularly with federal immigration authorities.

In addition, Sessions said federal prosecutors must consider bringing felony charges against those who have illegally entered the country more than once as well as those who marry to evade immigration laws. He also urged prosecutors to consider charging those illegally in the country with felony identity theft and document fraud.

“This is a new era. This is the Trump era,” he said. “The lawlessness, the abdication of the duty to enforce our immigration laws, and the catch and release practices of old are over.”

Sessions defended Trump’s proposed border wall, saying it will be another tool to fight illegal immigration amid efforts within the Justice Department and other branches of government to punish and deter border crossers.

He also returned to a common theme from the Trump campaign by saying drug cartels and criminal gangs are turning American cities into “war zones” by raping and killing innocent people.

“It is here, on this sliver of land, where we first take our stand against this filth,” he said.

Critics blasted the initiatives announced by Sessions as fear-mongering and anti-immigrant rhetoric not rooted in facts.

“Once again, Attorney General Sessions is scaring the public by linking immigrants to criminals despite studies showing that immigrants commit crimes at lower rates than the native born,” said Gregory Z. Chen, director of government relations for the American Immigration Lawyers Association.

Sessions made the announcement in Nogales, a border city that has witnessed a dramatic drop in immigrant and drug smuggling in recent years as more people enter the country in Texas, many of them Central Americans fleeing violence in Guatemala, Honduras and El Salvador.

The Border Patrol’s Tucson sector, which comprises most of Arizona, saw about 65,000 arrests of immigrants last fiscal year, roughly half the number agents made in 2012, according to Border Patrol data. Marijuana seizures have also dropped by about 28 percent from 1 million pounds in 2012 to 728,000 last year.

Following the border tour, Sessions spoke to officials at an International Association of Chiefs of Police conference outside Phoenix. He discussed crime rates, the border wall, immigration enforcement and sanctuary cities. He chided critics of mass incarceration and the decline in the prison population.

Sessions was also set to speak with service members at Luke Air Force Base near Phoenix.

Sessions’ immigration plans have long been foreshadowed. Even as it plans to cut the Justice Department’s budget by more than $1 billion, the Trump administration wants hundreds of millions of dollars to hire 60 federal prosecutors and 40 deputy U.S. marshals to focus on border cases.

The proposal also calls for adding $1.5 billion to Immigration and Customs Enforcement’s budget to find, detain and deport immigrants living in the U.S. illegally, along with more than $300 million to hire 500 new Border Patrol agents and 1,000 immigration agents.