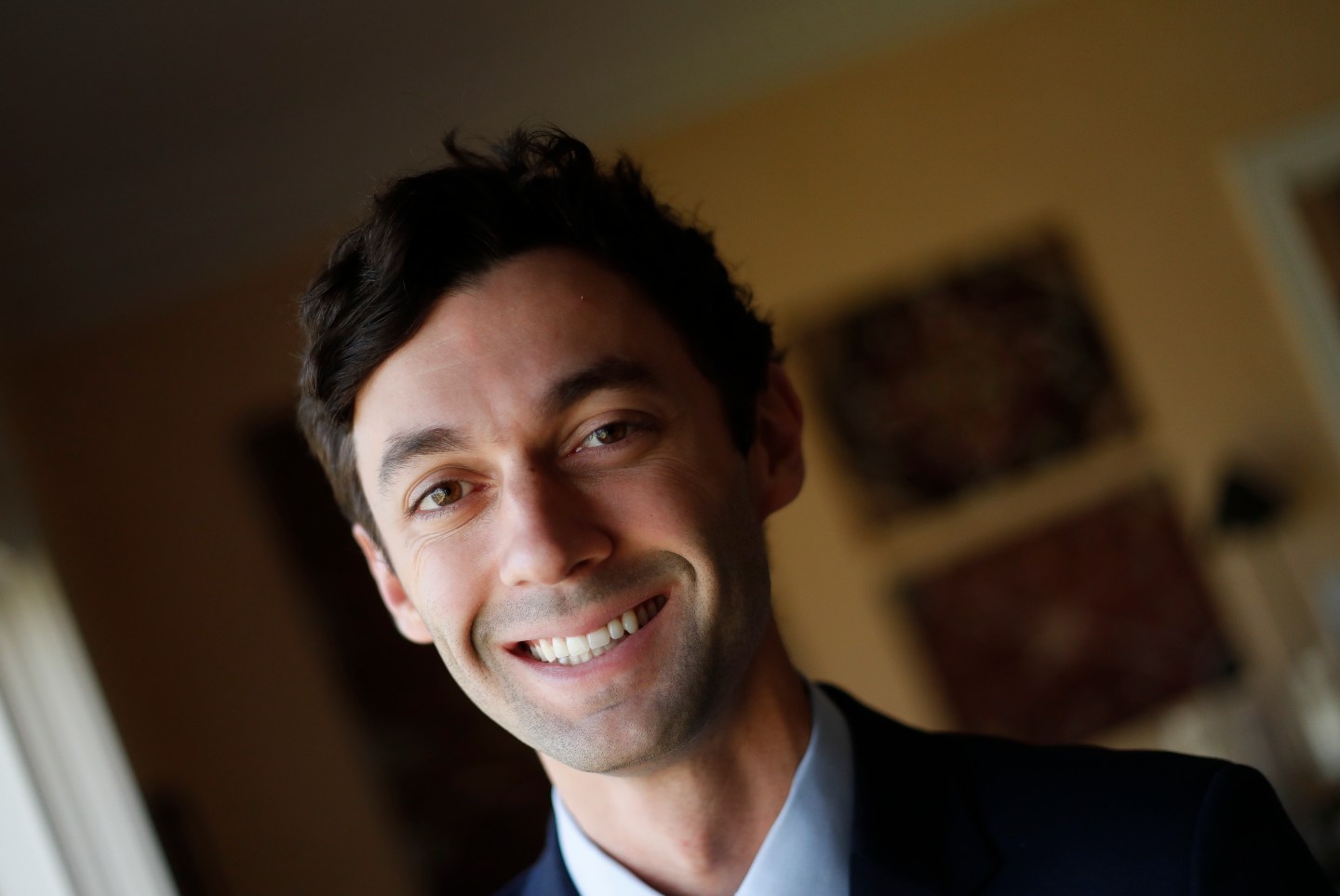 In this Feb. 10, 2017, file photo, Democratic candidate for Georgia's 6th congressional district Jon Ossoff poses for a portrait in Atlanta. Candidates for a special congressional election in Georgia are demonstrating that Republican squabbling extends well beyond Capitol Hill, while their leading Democratic rival rakes in more than $8 million in campaign cash and eyes an upset that would send ripples through Washington ahead of the 2018 midterms. (AP Photo/John Bazemore, File)
John Bazemore AP

A Georgia special congressional campaign has become an internal conservative squabble, with a national conservative group blasting a Republican establishment favorite as a big-spending “career politician,” while other GOP hopefuls argue over who’s most loyal to President Donald Trump.

It’s enough to leave national Republicans nervous they could lose the traditionally conservative suburban Atlanta district where Trump underperformed, with any upset certain to embolden Democrats ahead of the 2018 midterm elections.

Former Georgia Secretary of State Karen Handel was the initial GOP favorite among the 18 total candidates vying to replace Tom Price, who resigned to serve as Trump’s health secretary. Now Handel finds herself targeted with a six-figure attack ad from the conservative Club for Growth, which casts her as just another big-spending politician.

Handel dismisses the broadsides — for example, that she spent $2 million “planting trees to beautify government properties” — as a warped view of budget votes while she was commission chairman for Fulton County, which includes nearly all of Atlanta. She points out that she shepherded balanced budgets without the property tax hike her Democratic colleagues wanted, adding: “The people of the 6th District know and what I’ve done.”

Washington-based Club for Growth has endorsed Handel’s rival Bob Gray. The wealthy technology executive models his pitch after Trump, pledging to be a “willing partner” for the billionaire president. In one TV spot, Gray dons hip waders and literally drains a swamp, a reference to Trump’s catchphrase. But Gray also is jousting with rivals who say he originally preferred Florida Sen. Marco Rubio for president.

“Lyin’ Bob,” quips Bruce LeVell, a jeweler who ran Trump’s national diversity coalition and regularly defended him on cable news. “There’s no one in this race that has a relationship with the president like Bruce LeVell,” says LeVell.

Meanwhile, all 11 Republican candidates are looking up at Jon Ossoff, a 30-year-old Democrat who has raised at least $8.3 million. The eye-popping figure affirms Ossoff as a focus of the disparate anti-Trump movement around the country. He’s also got an army of volunteers that even includes actress Alyssa Milano, who helped woo voters to early polling locations.

7 Cities That Could Become the World’s Cybersecurity Capital

All 18 candidates from both parties will appear on one April 18 primary ballot, with polls suggesting that Ossoff will lead the first round of voting. Republicans are aiming to keep Ossoff below the majority required to win outright, forcing a two-person runoff — basically a Republican v. Democrat general election — on June 20.

Around the country, Democrats will look in 2018 to reverse Republicans’ 237-193 House majority, and Georgia’s 6th district is a model for suburban areas that could determine House control.

National Republicans and their aligned political organizations frame Ossoff, a former congressional staffer turned investigative filmmaker, as an inexperienced, ambitious climber certain to be a “rubber stamp” for House Democratic leader Nancy Pelosi. The leading spender is the Congressional Leadership Fund, backed by Speaker Paul Ryan. The PAC has plowed at least $2.2 million into Georgia.

But the Republicans actually in the race have yet to turn their full attention to Ossoff, and none of them can match his money advantage, including multimillionaire candidates spending their own money.

Handel, who’s raised about $500,000, spends most of her time highlighting her resume, but she still uses her latest TV spot to accuse “the other guys in this race” of “playing games.”

Gray, in turn, tweaks Handel for touting private sector experience when her name recognition comes from time in public office. “Nobody knew who I was eight weeks ago,” he boasts.

Former state Sen. Judson Hill pokes at Gray for running as an outsider yet avoiding mentioning his tenure as a local elected official. That detail is absent from Gray’s official campaign bio. “Is the city councilman a politician or not?” Hill asks.

Asked about his allegiance to Trump, Gray declined to tell the Associated Press who won his vote in Georgia’s presidential primary, calling the matter a distraction and emphasizing his volunteer activity for Trump’s general election campaign.

Another Republican, former state Sen. Dan Moody, is banking on support from Georgia Sen. David Perdue. Appearing in an endorsement ad, Perdue tells conservatives Moody is “one of us.” Moody also has thrown subtle elbows: One of his TV spots features an elephant — the GOP mascot — wearing a giant pearl necklace, an allusion to Handel and her signature accessory.

The national Republican Party isn’t taking sides, but has 15 staffers in Georgia and a paid advertising campaign encouraging the district to “vote Republican.” Party officials say they want to stoke Republican turnout to drive up the majority threshold Ossoff would need to win a primary outright.

Handel, meanwhile, laughs off the barbs, even the mockery of her pearls.

“The real opponent here,” she says, “is Jon Ossoff.”