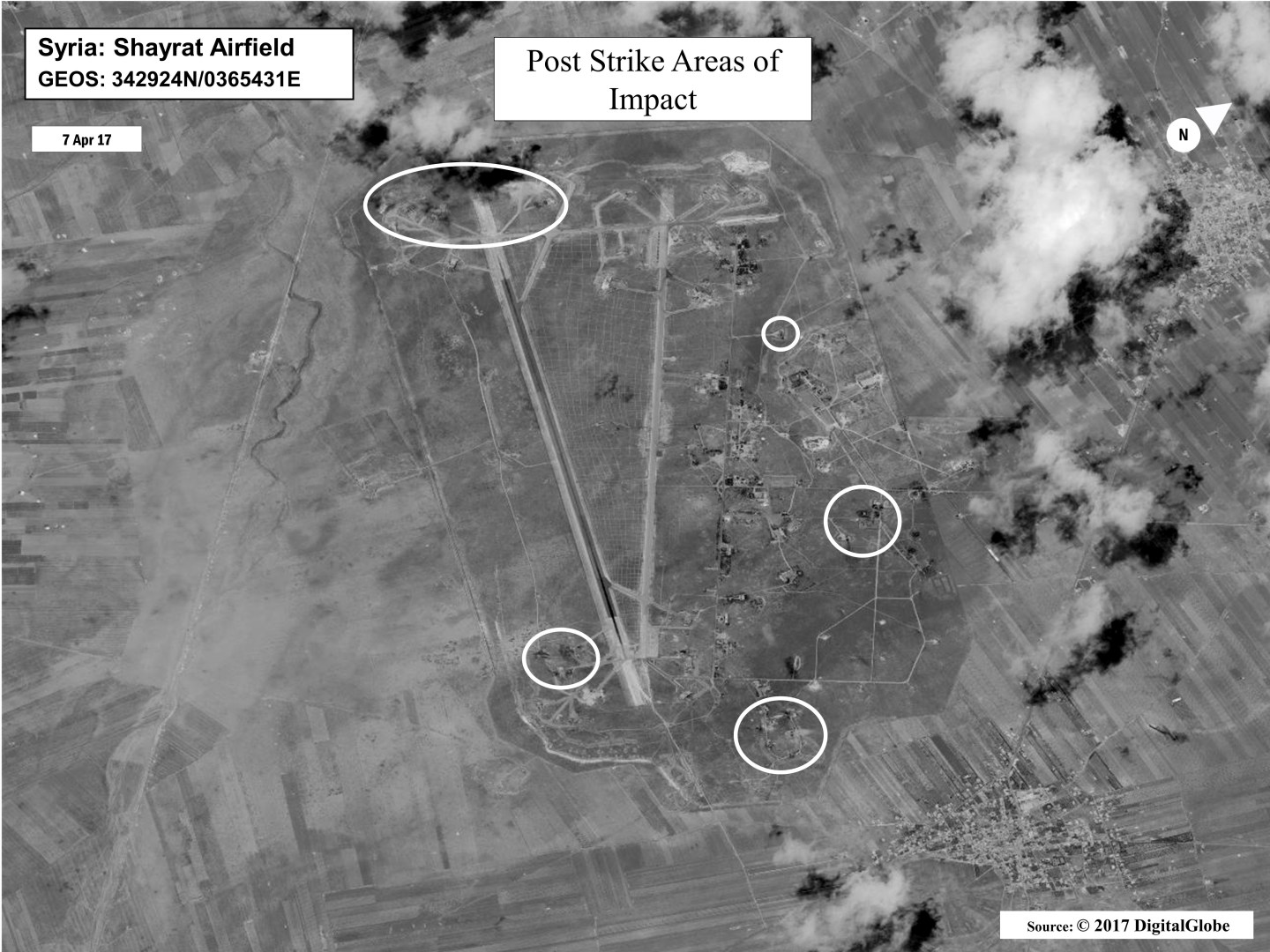 The U.S. on Thursday evening fired 59 Tomahawk missiles at Syria’s Al-Shayrat airbase, from which the Syrian government reportedly initiated a chemical weapons attack killing more than 80 civilians earlier in the week. Remarkably, these strikes followed a set of statements by U.S. President Donald Trump’s administration earlier in the week that the U.S. would not force Syrian President Bashar al-Assad to step down from power. Assad clearly took this as a signal that he could continue killing Syrians with impunity, prompting the chemical weapons attack. The Trump administration quickly determined that it could not let such an atrocity go unpunished.

It remains unclear whether Trump sees Thursday’s strikes as part of an overall strategy to address the root causes of Syria’s civil war. Even with a U.S. red line drawn on the use of chemical weapons, Assad, backed by Russia and Iran, is unlikely to be deterred from continuing to use conventional weapons to bomb hospitals and schools, starving besieged communities, or forcibly displacing civilians. This cycle of violence will only continue to foster the growth of terrorist groups like the Islamic State and Al-Qaeda despite U.S. counterterrorism efforts, with destabilizing effects and humanitarian consequences for Syria, its neighboring countries, and Europe.

The U.S. and its allies have struggled to effectively address the crisis in Syria. Every policy option at this point entails risks, whether it is solely intensifying the counterterrorism mission against the Islamic State, setting up humanitarian safe zones, negotiating a political deal with Assad, or maintaining the status quo level of U.S. commitment and allowing Assad to stay in power. Americans have no interest in perennial military interventions in the Middle East given the demand for resources at home and competing geostrategic objectives in Europe and Asia.

In addition, the U.S. must contend with intertwined realities in Syria that could challenge its ability to influence outcomes to its advantage. Among these reasons are countering terrorists and the roots of terrorism, which threaten the U.S. homeland and its allies and partners; preventing military confrontation with Russia and Iran while limiting the long-term, subversive influence they could have in the region; and stemming conflict emanating from Syria from further destabilizing neighboring states and Europe. The stakes are high, and the costs of both action and inaction are great.

U.S. Secretary of State Rex Tillerson has an opportunity to parlay the U.S. airstrikes into a discussion with Russian leaders when he travels to Moscow next week to invigorate the Geneva political negotiations on Syria. Russia stood by in Syria as Assad deployed chemical weapons against civilians, so pressuring Russia to reduce support for the Syrian leader will not be easy. It requires that the U.S. create leverage through economic sanctions and diplomatic suasion. In addition, Russia threatened to suspend its military communication channel with the U.S. in Syria after the April 6 strikes, even as America continues operations against the Islamic State and Al-Qaeda near Russian forces. (U.S. officials have since confirmed the communication link remains active.) Russia may also seek to make U.S. operations more difficult by enforcing Syria’s air defenses.

As a result, it is unclear whether the U.S. is prepared to amplify pressure on Russia. However, it has the momentum of this week’s events to try mobilizing multilateral pressure on Moscow to persuade Assad to honor a full ceasefire and resume the Geneva process. Additional U.S. and European sanctions on Russia for supporting Assad would intensify the pressure.

Iran is heavily vested in Assad’s control of western Syria, seeking to protect the Islamic republic’s command and control and resupply routes to Lebanon’s Hezbollah as a deterrent against Israel. It has mobilized several thousand Shia fighters in Syria, comprised of Hezbollah, Syrians, and regional foreign fighters, to buttress Assad’s own military. Iran will not be easily convinced to reduce its support for Assad absent significant U.S. and international pressure. Iran may also conduct retaliatory strikes against American forces operating in Syria and Iraq. The U.S. must calibrate its approach to Iran decisively and carefully to achieve the right combination of pressure and persuasion, with the end goal of a Syrian ceasefire and resumption of political negotiations.

Finally, in collaboration with allies and partners, Washington should continue working with local Syrian groups to deliver immediate humanitarian assistance to besieged populations. The U.S. should also knit together security, governance, and development efforts to stabilize and build community resiliency in areas cleared of the Islamic State and Al-Qaeda. These efforts should consolidate gains in local sectors to eventually connect with a top-down political framework from the Geneva diplomatic negotiation process. This does not necessitate a large commitment of U.S. ground troops. It does, however, require U.S. leadership to mobilize European and Middle Eastern allies and partners to help provide humanitarian, development, and security assistance to Syrians endeavoring to rebuild their future.

The U.S. demonstrated resolve this week following a heinous attack in Syria. It should build upon that momentum to press ahead on a holistic strategy to end the country’s tragic civil war.

Melissa G. Dalton is a senior fellow and the deputy director of the International Security Program at the Center for Strategic and International Studies (CSIS). Prior to CSIS, she served for 10 years at the U.S. Department of Defense in several policy and intelligence positions.