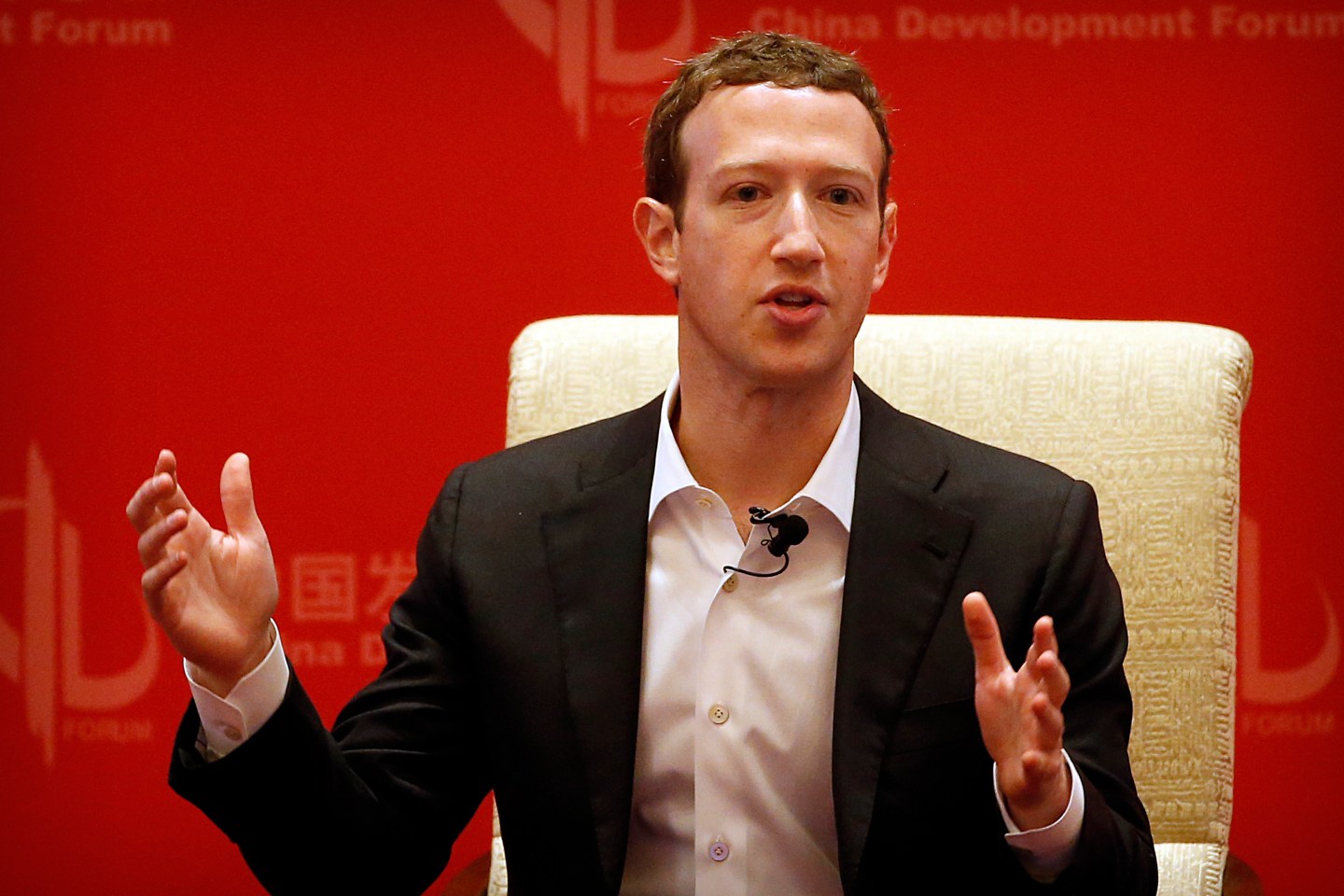 In this Saturday, March 19, 2016, file photo, Facebook CEO Mark Zuckerberg speaks during a panel discussion held as part of the China Development Forum at the Diaoyutai State Guesthouse in Beijing. Zuckerberg is meeting with conservative leaders, including radio host Glenn Beck, on Wednesday, May 18, 2016, in light of a report that Facebook downplays conservative news subjects in its "Trending Topics" feature. Facebook has denied the claims, but Zuckerberg said the company is investigating it nonetheless. (AP Photo/Mark Schiefelbein, File)
Mark Schiefelbein—AP

When critics started accusing Facebook of harming journalism by promoting “fake news,” the social network initially balked at admitting any responsibility for the problem. But that attitude has changed dramatically in recent months.

Among other things, Facebook started what it calls the Journalism Project, which it says is aimed at helping media outlets figure out how to use the web to improve their content and their business models. And now the company has committed to help fund a separate effort aimed at rebuilding trust in news.

In an announcement on Monday, Facebook became part of a $14-million effort called the News Integrity Initiative that is spearheaded by Craigslist founder and journalism advocate Craig Newmark. The initiative will fund research and projects related to improving news literacy and trust in journalism, as well as hosting events at which experts will discuss related issues.

In addition to Facebook and Newmark, founding members include the Ford Foundation, the Democracy Fund, the John S. and James L. Knight Foundation, the Tow Foundation, web-browser maker Mozilla and New York-based startup incubator Betaworks. The project will be run out of the City University of New York’s journalism school.

CUNY professor Jeff Jarvis, who will direct the project as part of the Tow-Knight Center for Entrepreneurial Journalism, said in a blog post that the idea came from conversations he had with Newmark about the need to fight back against the rise of fake news and misinformation.

Over the past few months, the Craigslist founder has become a significant donor to journalistic causes, committing $1 million to fund an ethics chair at the Florida-based Poynter Institute journalism school, as well as donating money to Wikipedia. He recently said he plans to spend a total of $6 million funding such efforts.

Newmark has said that he believes a trustworthy press “is the immune system of democracy,” and that trust is the most important quality a free press can have.

“Consumers want news we can trust. I know I do, but trust works both ways,” he told Fortune in an email after the announcement. “We have to put some demands on news orgs that they be as transparent as possible.”

The problem of misinformation and disinformation isn’t just something for news outlets and Facebook to fix, Newmark added. “As news consumers we need to be smarter about the news we read. Clickbait isn’t clickbait when it’s ignored. Also, we need to ignore trolls when they post disinformation.”

Jarvis said that after he and the Craigslist founder started talking, he also heard from Aine Kerr, formerly of the social-news startup Storyful, who had joined Facebook as part of its news partnerships team and wanted to get involved. The social network also committed to fund the project.

Jarvis also noted that while Facebook is a collaborator and funder of the project, “we designed the governance to assure that neither Facebook nor any other funder would have direct control over grants and to make sure that we would not be put in a position of doing anything we did not want to do.”

In the past, Facebook co-founder and CEO Mark Zuckerberg has tried to avoid describing the social network as a media entity, and he initially scoffed at the idea that “fake news” was a problem, or that Facebook needed to do anything about it. In a statement in February, however, Zuckerberg acknowledged for the first time that Facebook does play a significant role in how people get their news, saying: “We know there is misinformation and even outright hoax content on Facebook, and we take this very seriously.”

The company has taken a number of steps to try to stamp out fake news, including setting up a process whereby it takes fact-checking and verification efforts from third-party outlets like Politifact and Snopes, and shows users when a particular story is being questioned or has been debunked.

In announcing the Journalism Project in January, Facebook said it “cares a great deal about making sure that a healthy news ecosystem and journalism can thrive,” and committed to helping media outlets—including smaller, local publishers—figure out how to best use the network for their journalism.

The company also committed to working with media companies to develop new products related to journalism, and to helping educators and publishers figure out “how we can equip people with the knowledge they need to be informed readers in the digital age.”

Facebook isn’t the only technology giant that has committed funds to try and fix the problem of trust in media. Google—which has also been criticized by media companies for not doing enough to help the industry after disrupting its business models—has its own Trust Project, which it announced in 2014.

In a recent research report, Emily Bell of the Tow Center for Digital Journalism at Columbia University, looked at the influence that Google and Facebook and other platforms have had on the media business and the impact that has had on journalism.

Since distribution through social networks has become one of the primary ways people find news and information, the report says, “decisions made by Facebook, Google, and others now dictate strategy for all news organizations, but especially those with advertising-based models. Platforms are already influencing which news organizations do better or worse in the new, distributed environment.”

Bell also argued in a recent essay in the Columbia Journalism Review that technology companies such as Facebook and Google should donate several billion dollars to fund a non-profit journalism entity similar to the BBC, as a way of helping to repair the media industry that they disrupted.