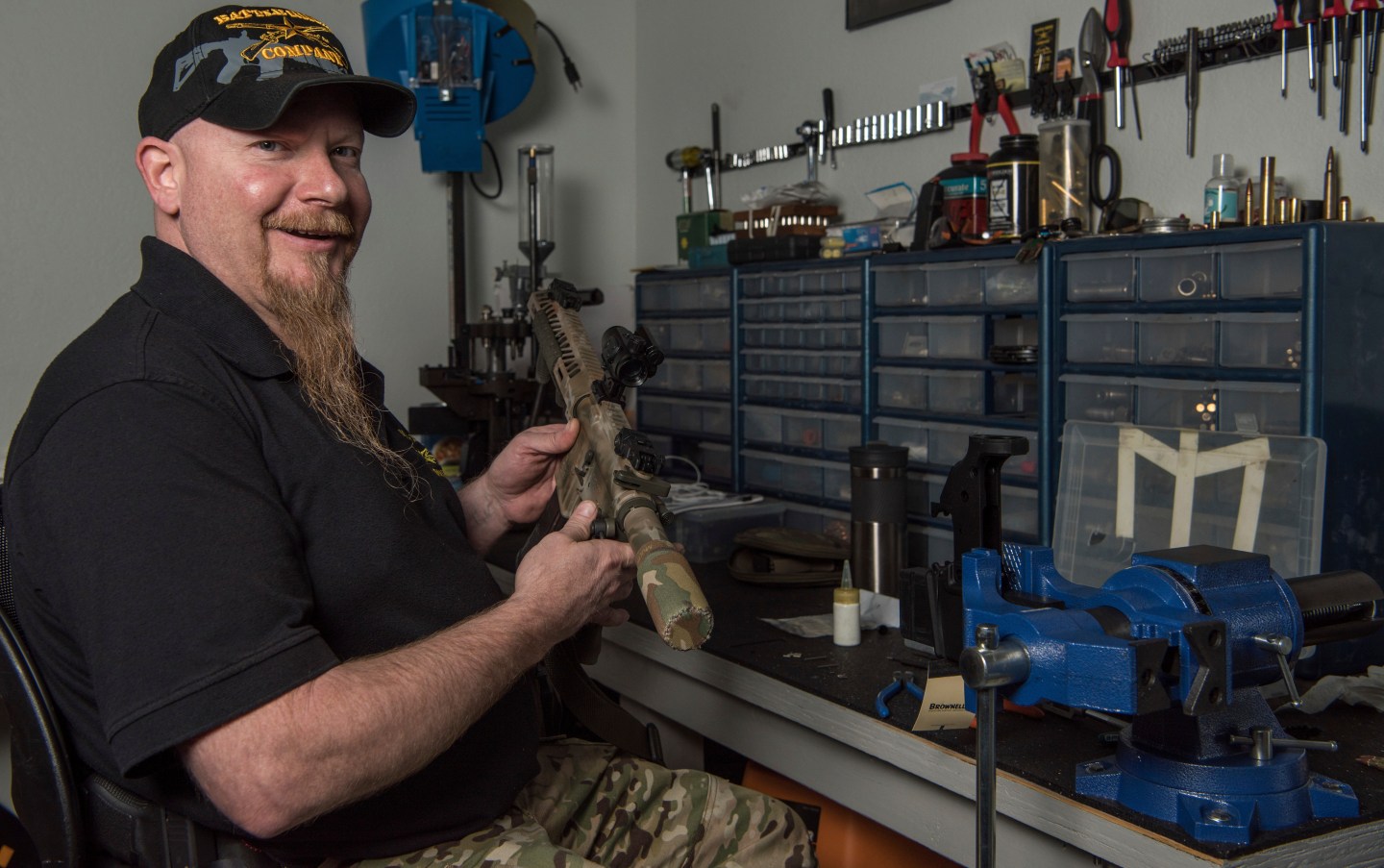 In this photo taken March 15, 2017, Jamey Spears, an ammunition expert for Battle Rifle Co. poses with a gun part in Webster, Texas. Battle Rifle is now one of more than 10,000 gunmakers in the United States. President Donald Trump promised to revive manufacturing in the U.S., but one sector is poised to shrink under his watch: the gun industry. Fears of limits on guns led to a surge in demand during President Barack Obama’s tenure and manufacturers leapt to keep up. (AP Photo/Lisa Marie Pane)
Lisa Marie Pane AP

President Donald Trump promised to revive manufacturing in the United States, but there’s one once-burgeoning sector poised to shrink under his watch: the gun industry.

Fears of government limits on guns—some real, some perceived—led to a surge in demand during President Barack Obama’s tenure and manufacturers leapt to keep up. Over the decade ending in 2015, the number of U.S. companies licensed to make firearms jumped a whopping 362 percent. But sales are down and the bubble appears to be bursting with a staunch advocate for gun rights in the White House and Republicans ruling Congress.

“The trends really almost since Election Day or election night have been that gun sales have slacked off,” said Robert Spitzer, political science department chairman at State University of New York at Cortland. “When you take away Barack Obama and you give the Republicans control of both houses of Congress, which is extremely friendly to the gun lobby, then the political pressure subsides. And that surely is at least a key part of the explanation for the drop-off in sales.”

The pendulum swing is not lost on employees of outfits such as Battle Rifle Co., a small enterprise tucked into a nondescript strip mall outside Houston, with a storefront section featuring cases filled with handguns and walls lined with assault rifle-style long guns. The manufacturing floor and its eight employees, all veterans of the military or law enforcement, occupy the back.

“President Obama was the best gun salesman the world has ever seen,” said production manager Karl Sorken, an Army veteran and self-described liberal who voted for Obama and notes the change for the industry under Trump is a topic of conversation in the shop.

“You might have people who were more inclined to buy because they were worried they might not be able to later. That’s going away for sure,” he said. “But by the same token, the shooting sports in this country are going to explode because they’re not going to be as worried or restricted about how they can shoot, where they can shoot.”

There are nearly 10,500 gunmakers in the country, many of them founded since 2000, said Larry Keane, senior vice president and general counsel for the National Shooting Sports Foundation. Experts say many are drawn to long guns, in part because sales for them rose after a Clinton-era ban on “assault weapons” expired in 2004 and politicians’ threats to restrict them drove demand. At the same time, shooting sports grew in popularity, and returning veterans sought out weapons with which they became comfortable in Iraq and Afghanistan.

From 2004 to 2013, sales of all handguns — pistols and revolvers — increased nearly fivefold, according to industry figures. Sales of rifles tripled in that timeframe.

Battle Rifle took shape in the middle of that surge, formed in 2010 after its founder Chris Kurzadkowski ventured into his garage to build his police officer son a rifle from scratch.

Now, the retail store in the front of his shop has a cozy seating area, a TV and coffee with such names as AK-47 Espresso Blend. The craftsmanship happens out back, where the all-male crew brings a love of long guns, the Second Amendment, precision and a bit of artistry to creating custom-made rifles.

Battle sells about seven each week. Prices range from around $700 to as much as $4,000, depending on accessories, specifications and custom paint jobs. Some 60% of its weapons are sold to police officers.

Country music and conservative talk radio waft through the cavernous shop where guns are made and used ones repaired. The ribbing among the tight-knit group is constant, but when it turns serious, the men describe their work as something that transcends simple labor.

“Our forefathers realized what tyranny does and if you don’t have a way to protect yourself from tyranny then you become a subject,” said ammunition expert Jamey Spears, who spent five years in Texas law enforcement until he was shot during a raid on a Dallas crack house. The .45-caliber hollow point bullet that went through a gap in his body armor remains lodged next to his spine, a noticeable lump reminding him of how close he came to dying that day.

“I have nothing but the most heartfelt adoration for people who serve so others can be safe,” he said.

One reason for the surge in manufacturers of AR-platform firearms — called “modern sporting rifles” by the industry — is that they are not protected by patents or trademarks. That makes it an open field for anyone with the proper federal license.

Another has been demand helped by a monied clientele. The majority of AR owners are overwhelmingly male, with half between the ages of 45 and 64, and more than half reporting annual income of more than $75,000, according to a 2013 survey conducted for the National Shooting Sports Foundation, which represents gunmakers.

Daniel Defense, a company based in Black Creek, Georgia, about 25 miles west of Savannah, capitalized on that growth. It began in 2000 by making parts for AR-style firearms. Last year, Daniel sold 60,000 complete weapons.

Founder Marty Daniel, who employs about 310 workers and is more than doubling his manufacturing facility’s square footage, said he was prepared for the dips in sales and anticipates those will last through the year. But he considers the downturn part of a natural business cycle, like those that hit the housing market.

“There are some blips in there from time to time. And we’re in one of those because Trump was elected,” Daniel said. But, he says, “it’s not gloom and doom.”

At Battle Rifle, Sorken said he’s confident the industry will stay on the upswing, even if not at the rate seen in recent years.

“In this country, the gun culture is so strong I’m not worried about it going anywhere,” Sorken said.