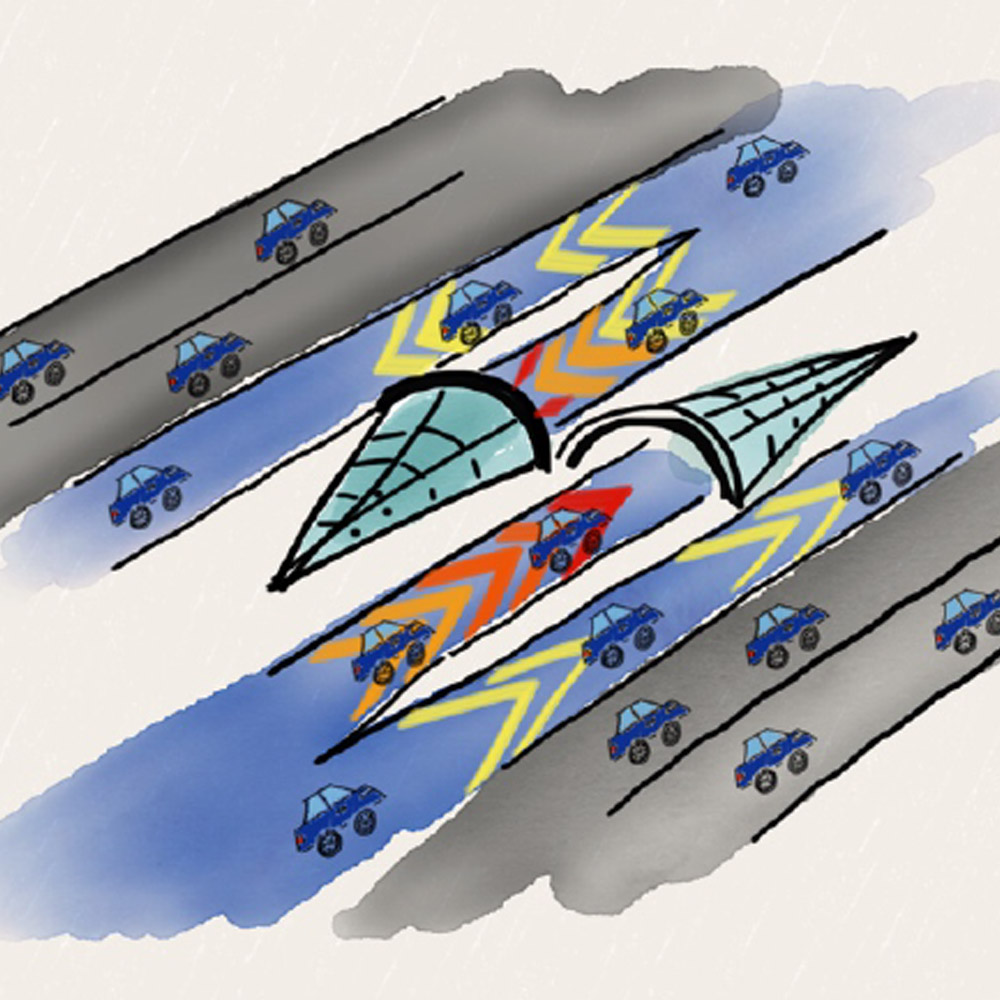 Can you imagine a future where self-driving cars zip beside interstate highways at 120 mph with absolutely zero congestion?

It’s a future that could exist as soon as 2050, according to UC Berkeley graduate students Anthony Barrs and Baiyu Chen. Other transportation experts agree — so much so that the pair was awarded top prize and $50,000 for their design at the Infrastructure Vision 2050 Challenge on Wednesday.

The competition, hosted by the Association of Equipment Manufacturers in Las Vegas, solicited design solutions that could address some of the biggest challenges facing the United States’ infrastructure system. Barrs and Chen turned their attention to the nation’s highways, some of which have fallen into disrepair and suffer major congestion. The duo’s idea was to construct a “Hyperlane,” or a single platform the size of four interstate lanes that would run parallel to pre-existing highways in order for self-driving cars to travel at high speeds with no chance of getting into a jam.

The Hyperlane essentially functions like a bullet train, which Barrs and Chen said influenced the concept of their design.

That notion was expressed in the pair’s final product. Not only do automobiles on the Hyperlane move quickly, but also the plan calls for various tolled stations where self-driving cars, courier trucks, and buses can get on or get off like a highway exit. While a recent poll found that the majority of Americans still fear riding in self-driving cars, Hyperlane safety is monitored with embedded sensor technology that regulates the flow of traffic along with the autonomous vehicles’ built-in computers.

The challenge of revitalizing America’s transit options is expected to cost an enormous amount of money. At his address to Congress last week, President Donald Trump reinforced his intent to invest $1 trillion into the country’s “crumbling infrastructure.” But Barrs and Chen believe their proposal is relatively inexpensive. Their blueprint notes that the Hyperlane leverages pre-existing highways and benefits from dynamic pricing for access fees.

“Dynamic pricing ensures demand is distributed — using price as the motivating incentive for users to use, or not use, the network,” a slide from Barrs’ and Cohen’s presentation reads. The two believe their approach to pricing will push users to select transit based on their needs at that specific time, like opting for a public bus versus a personal vehicle.

Following their victory at the Infrastructure Vision 2050 Challenge, Barrs said that he and Chen plan to take a semester off from teaching at their graduate programs. In the meantime, the pair wants to look into a number of innovation and transportation initiatives at the school. As for the $50,000 prize, Barrs said they are considering using it to partner with companies like Uber and Lyft that use transportation as a service. “That could provide lobbying muscle,” Barrs said.

“We are elated, very, very excited,” he added. “We’ve been working on this for over a year and I think that having the folks at this conference recognize that this is a viable path forward and something that we should pursue and it’s really validating.”