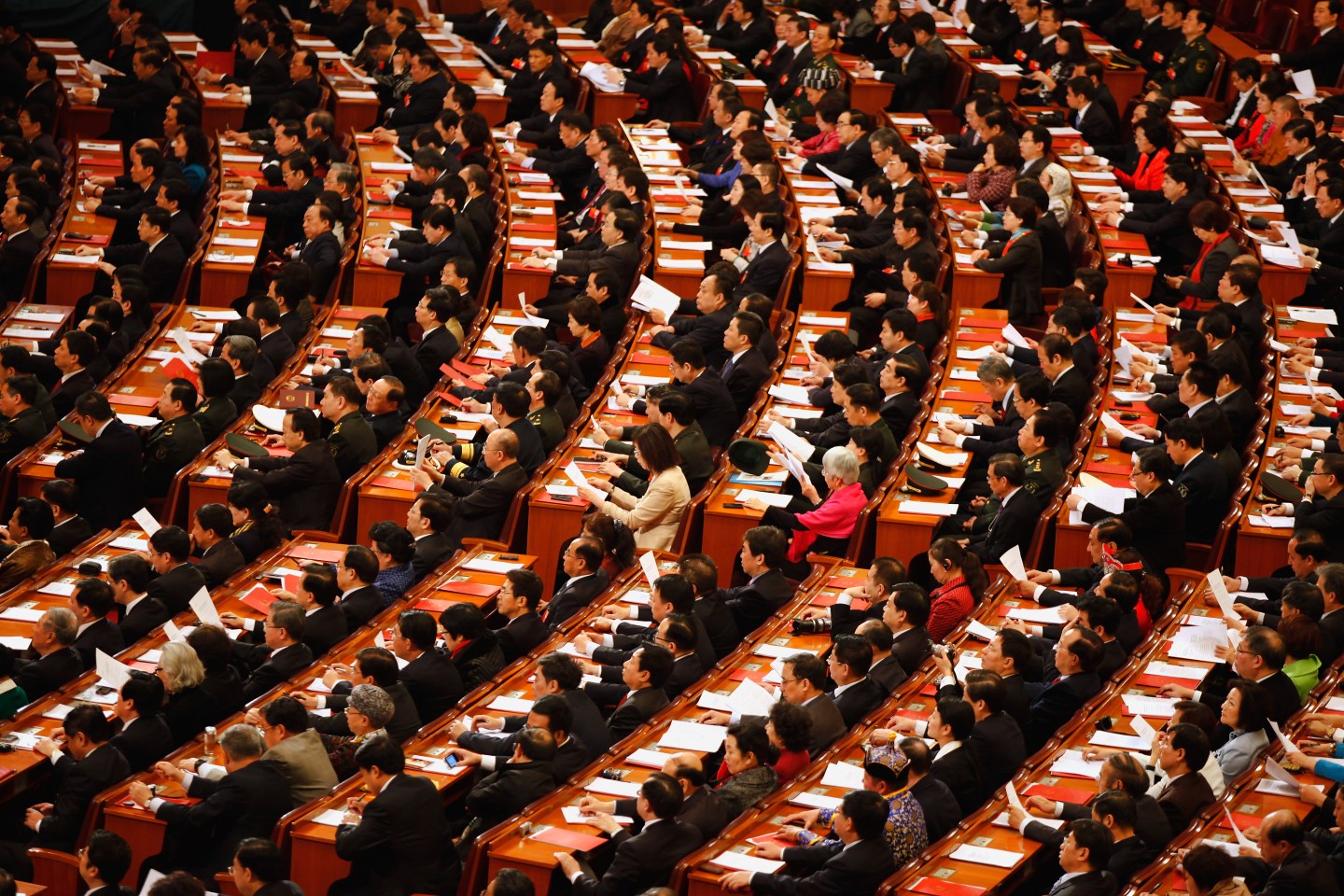 BEIJING, CHINA - MARCH 14: Delegates take their seats for the closing session of the National Peoples Congress (NPC) at The Great Hall Of The People on March 14, 2012 in Beijing, China. The National People's Congress (NPC), China's parliament, adopted the revision to the Criminal Procedure Law at the closing session of its annual session today. (Photo by Lintao Zhang/Getty Images)
Photograph by Lintao Zhang—Getty Images/File

The fortunes of the richest 100 members of China’s parliament and its advisory body – all dollar billionaires – grew about 64% in the four years since Xi Jinping rose to power, according to data from an organization tracking wealth in China.

Xi has overseen a crackdown on corruption and decadence, and made the fight against poverty a top priority after becoming president in 2013.

Since then, however, the wealth of the upper crust in the National People’s Congress (NPC) and the Chinese People’s Political Consultative Conference (CPPCC), tracked by the Shanghai-based Hurun Report, has grown faster than the wider economy, the stock market, home prices and wages.

The NPC and CPPCC start their annual sessions in Beijing on Friday. While their membership cuts across society, this year 209 delegates – about 4% of the total – have been identified by Hurun as each being worth 2 billion yuan ($290.7 million) or more.

Their combined wealth is close to the GDP of Belgium, totaling nearly 3.5 trillion yuan, or more than $507 billion.

And over half of them are dollar billionaires. According to Hurun’s estimates, the top 100 are worth a combined 3 trillion yuan this year, up 64% from 1.84 trillion yuan in 2013.

That represents an average annual increase in their wealth of 13% over the four year period from 2013-2016, compared with economic growth averaging 7.2%, an average rise of 7% in the CSI300 stock index, and an average 5% increase in home prices over the same period.

Wage data is less up to date, but for the three years from 2013 to 2015 annual wage growth roughly averaged 9%.

All of the super-rich in parliament or its advisory body are in business, rather than career bureaucrats. Among them are Hong Kong businessman Victor Lee, Pony Ma of tech giant Tencent Holdings (TCEHY), and Robin Li of Baidu (BIDU).

Rupert Hoogewerf, founder and publisher of Hurun Report, notes that the companies represented by the wealthy lawmakers have had a big impact in terms of taxes and employment.

“Having these stakeholders as advisers to the government I can understand makes a lot of sense,” he said.

While all Chinese over the age of 18 are technically allowed to vote for delegates and stand for election to the NPC, most delegates are hand-picked by local level officials.

The presence of rich businessmen in parliament and its advisory panel is a calculated move by the ruling Communist Party, said Rory Truex, an assistant professor at Princeton.

“By giving the extremely wealthy a position in parliament that kind of helps ensure their loyalty and it gives them a vested interest in the success of the party,” he said.

The entrepreneurs benefit, too, according to Truex, who published a paper in 2014 showing businesses that had a CEO in 11th NPC (2008-2012) enjoyed a “reputation boost” that increased operating profits by 3-4%. He has not analyzed data for the current session of parliament.

Victor Shih, a scholar of elite Chinese politics at the University of California San Diego, said businessmen valued seats at local and national levels because “it affords them a certain degree of political protection.”