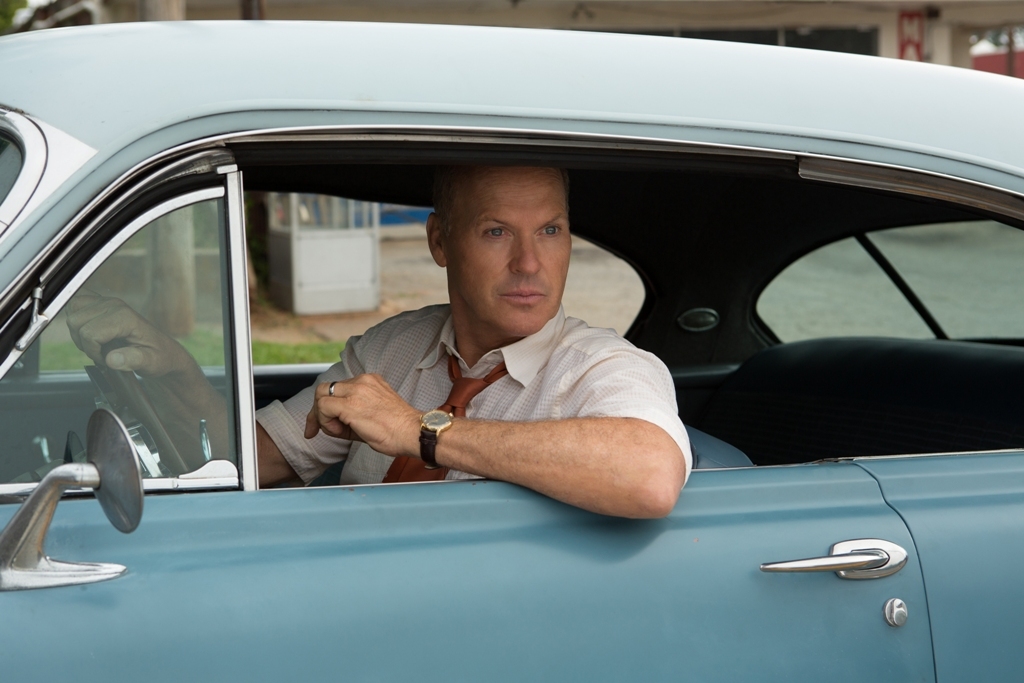 Here’s one script that isn’t up for Best Picture.

Cut to the 1950s: a 52-year-old salesman peddles a new, multi-spindle milkshake maker to hamburger stands across the Midwest. The salesman has a simple pitch—faster milkshakes.

But what he’s really selling is a concept, a futuristic vision of what business could deliver: speed, reliability, mass production. Nobody’s buying.

Except for one outfit way off in California—and they order six of the new machines. Curious about this special customer, our salesman sets out in his two-tone Plymouth from Illinois for San Bernardino.

What he finds dazzles him. It’s a well-trafficked hamburger stand—a mechanized, hygienic, family-friendly and fast hamburger stand. The salesman sees the realization of a dream, something like the dream that might have occurred after long days in the machine shop to Henry Ford. It is not a stand, it is an assembly line of hamburgers. The salesman’s name is Ray Kroc, and the hamburger stand, run by two perfectionist brothers, is called McDonald’s.

The Founder tells the story of how Kroc persuaded the brothers, against their instincts, to let him franchise the restaurant and then ran away with the business, creating the fast food behemoth that now feeds 1% of the planet every day. (You can see a trailer for the movie here; it’s still in theaters, too.)

Though praised by critics and featuring a big-time cast—Michael Keaton is a relentlessly persistent Kroc and Laura Dern is the devoted first wife who cannot keep up with Kroc’s ultimately ruthless ambition—The Founder did not earn a single Oscar nomination. Robert D. Siegel’s energetic script was overlooked.

Still, I wish this movie would get some attention, because it does what Hollywood so rarely tries to do: it tells the story of a business hero, on his own terms. Yes, Kroc’s personal and ethical flaws are on full display, as they should be. But from the opening cut, a close-up of Kroc delivering a monologue for the electric milkshake mixer in which he intones the mantra, “You increase supply and demand follows,” The Founder is about a man—actually, three men—consumed with the tiny efficiencies and everyday improvements that once in a while deliver a miracle or at least a product that changes how people live.

Hollywood’s aversion to business is an unspoken truism of American culture. Although the film industry loves to make movies about cops, prosecutors, ballplayers, film stars, warriors, generals, gangsters, presidents, senators, dictators, journalists, cowboys, criminals, scientists, seekers of fortune, folk singers, astronauts and social crusaders, it recoils from films about what, in fact, most Americans actually do each day, which is work in a private business.

You have to go back to 2011 to find an Oscar winner (The Social Network) even modestly admiring of a business icon. Steve Jobs has also been featured; presumably, a post-modern industry like software, with no messy factories and few low-paid workers, does not offend the arbiters of cultural taste. Other than that—and a screen hagiography of Warren Buffett—when business makes an appearance on the silver screen, it is typically in films such as Wall Street (“Greed is good!”), Syriana (corruption in Big Oil) or The China Syndrome (nuclear cover-ups) that stick to the stereotype of executives as ruthless and (often) criminal, and which isolate ambition as the original sin.

If anything, though, Hollywood doesn’t denigrate business as much as it ignore it. It must have portrayed a hundred aliens and soft-on-the-inside Boston tough guys for every broker or insurance agent (granted, Double Indemnity was a heckuva film). But movies that capture the drama of Gilded Age titans, or Texas oil drillers, or modern capitalists (think Charlie Merrill, bringing the brokerage to Main Street), are few and far between.

The movies, of course, have no problem showing us rich people, just a disinclination to show how they got that way. It’s as if grubbing for money were un-American. (Through truly, what could be more American?) Think of the golden era classic Miracle on 34th Street, in which Kris Kringle (aka Santa Klaus) cleanses Macy’s of the crime of actually wanting to hang onto its own customers, rather than send them to the competition.

A refreshing take on business

On that score, The Founder is downright refreshing. Kroc tells Dick and Mac McDonald (straight arrows played by Nick Offerman and John Carroll Lynch) that the best way to treat a competitor is to shove a firehose down his throat. The brothers are horrified; Kroc is just as horrified that the brothers, until he arrived on the scene, were content with a single restaurant. (They had tried franchising once before and were dissatisfied with the quality control.) Kroc is also keen on quality, but he pushes the brothers to expand faster than they want. Under the right leadership—his—he envisions the golden arches as scarcely less ubiquitous on the landscape than church steeples and the American flag. Dick smells a rat—“a wolf in the henhouse”—but Kroc, by now, is beyond heeding either the brothers or the contract the three of them signed.

A power struggle ensues, with each side claiming to represent the true McDonald’s. It’s easy to sympathize with the brothers when Kroc tries to cut costs by substituting powdered shakes for the real deal (later he puts back the ice cream). But when the brothers block him from selling menu space to Coca Cola as too crass and “commercial,” you have to wonder if they understand what they’re really about. With their finnicky insistence on replication—every burger must have two pickles, never one or three—they’ve built a perfect vehicle for mass production and failed to mass-produce it.

Ultimately, Kroc realizes that by buying the land under the restaurants he can control the entire show. Worn out by his unceasing demands, the McDonalds sell out to Kroc—who then cheats them out of the royalties he verbally promised but refused to put in writing. Along the way, the still-married Kroc seduces Joan Smith, the wife of a franchisee (she would become the third Mrs. Kroc, and a notable philanthropist after Ray’s death).

Given the irony of the title (Kroc would call himself the “founder,” but of course he wasn’t) it’s easy to cast the story as another morality tale. What elevates the movie is its homage to the exhaustive labor of building a business and, in fact, inventing an industry. Like the brothers. Kroc is a detail and a control freak; he goes into a rage when an early franchisee tries adding corn on the cob to the menu.

To me, the attention to professional craft brought to mind the 2005 Academy winner, Walk the Line. That film paid tribute to the musical genius of Johnny Cash even as it didn’t gloss over his drug addictions and other shortcomings. The Founder shows us a flawed man and a business genius. I’m giving it my Oscar.