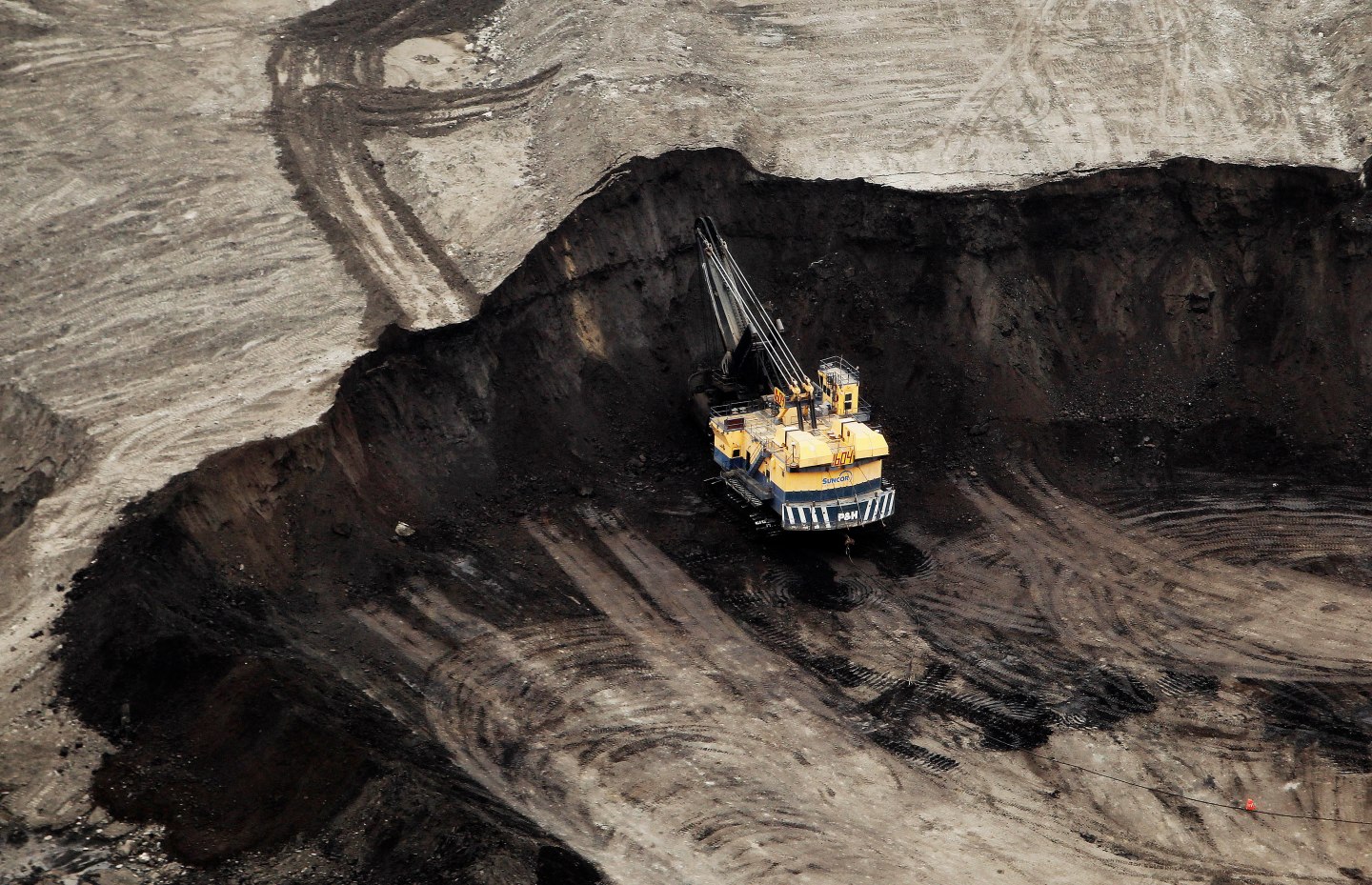 A machine works at the Suncor Energy Inc. mine in this aerial photograph taken above the Athabasca Oil Sands near Fort McMurray, Alberta, Canada, on Wednesday, June 19, 2014. Heavy crude from the oil sands has traded at an average of $18.70 per barrel below the U.S. benchmark over the last five years due to a transportation bottleneck in North America. The discount costs Canadas economy as much as C$50 million per day, according to the Canadian Chamber of Commerce. Photographer: Ben Nelms/Bloomberg via Getty Images
Photograph by Ben Nelms — Bloomberg via Getty Images

The company said Wednesday in its annual 10-K filing to the Securities and Exchanges Commission that it has cut its estimate of recoverable reserves by a net 3.3 billion barrels of oil equivalent (or “bboe”), to just under 20 billion, a result of low crude prices that have made some of its investments in high-cost oil uneconomic to extract. Specifically, the company de-booked its entire pro rata 3.5 billion barrels of reserves in a Canadian oil sands project.

That’s the bad news. On the slightly brighter side, Exxon’s action may help it to defuse the storm over its accounting practices that led the Securities and Exchange Commission – at the prompting of New York Attorney General Eric Schneiderman – to launch an investigation into the company back in August. Environmental groups had accused Exxon of ignoring the risk that future environmental policies around the world (in the context of the 2015 Paris Climate Change Accords) might lead to a permanently lower trajectory for oil demand, and consequently for oil prices. That was a new addition to longer-standing accusations that Exxon had hidden research about climate change that didn’t fit its outlook.

At the time, Exxon had said it stood by its valuations.

Crude prices have collapsed from over $105 a barrel in 2014 to an average of under $45 a barrel last year. Even though they’ve rebounded this year to trade around $55 a barrel, many of the investments that majors made during the boom times still wouldn’t break even in the new environment.

At face value, yesterday’s de-booking is just a mechanical reaction to market developments. Under SEC rules, Exxon and other U.S.-listed companies report reserves based on the average crude price on the first day of each calendar month.

But it seems certain to take the heat out of the SEC investigation, even if that wasn’t the conscious aim of Exxon’s management.

Experts have long said that it would be difficult to prove manipulation, given the broad leeway given to oil companies in valuing their reserves. Given that the write-down effectively addresses the SEC’s – and Schneiderman’s – main gripe, it’s not clear how much enthusiasm there will now be for pursuing the investigation, especially since the SEC is due to get a new director nominated by the world’s most powerful climate change skeptic, President Trump.

The change of heart at Exxon over valuing its oil sands assets is at least consistent with the idea that new CEO Darren Woods is taking the U.S.’s biggest oil company in a different direction from his predecessor, Secretary of State Rex Tillerson. That direction seems likely to rely more on shale than on other, higher-cost “alternative” oil resources like oil sands.

In January, in what was Woods’ first major move, Exxon spent $5.6 billion to double its acreage in the Permian shale formation in Texas. That was Exxon’s first major acquisition in shale since it bought XTO in 2009, and the largest oil and gas deal in the U.S. in over two years. Reserves in the Permian are a cinch to justify to the SEC, being closer to existing operations, closer to Gulf coast refineries and, not least, in a more user-friendly natural state than bitumen mixed in thousands of tons of dirt. In a neat but accidental symmetry, the acquisition added 3.4 billion bboe in new reserves, almost exactly what Exxon just wrote off in Canada.

Shale has shown itself to be much more resilient to the collapse in oil prices than oil sands since 2014. While a number of companies have folded due to taking on too much debt in the boom, the essential fact that there are billions of barrels of oil that can be recovered profitably in a low price environment hasn’t changed. The International Energy Agency expects shale producers to increase output by 500,000 barrels a day this year after having fallen in 2016.

The U.S.’s biggest oil company may not, in its heart, have completely said farewell to oil sands (some of the volumes could be rebooked as proved reserves if current price levels hold). But the market already has factored in the loss of those reserves: Exxon’s shares are down 15% since July.