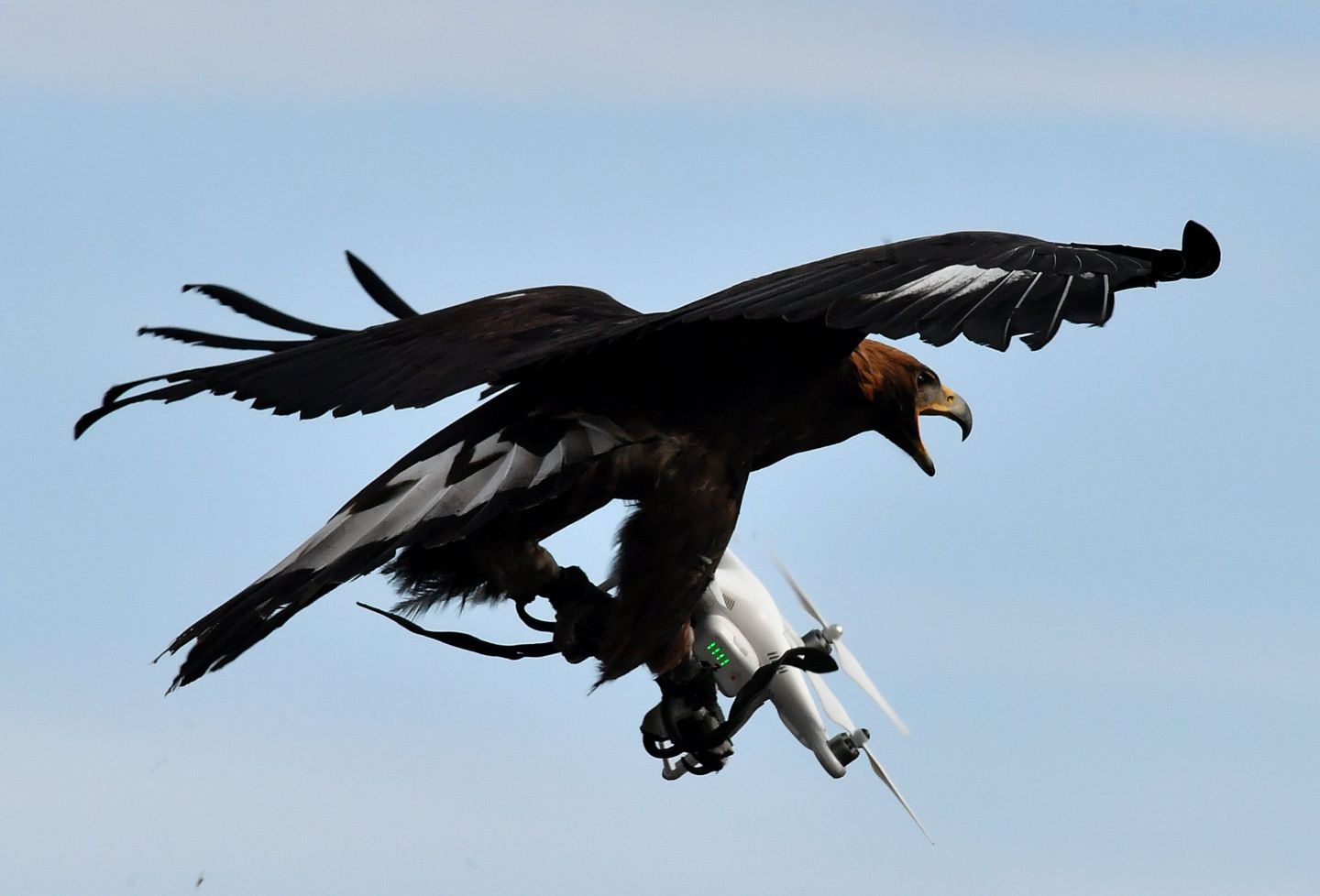 TO GO WITH AFP STORY BY PHILIPPE BERNES-LASSERRE A royal eagle catches a drone during flight during a military exercise at the Mont-de-Marsan airbase, southwestern France, on February 10, 2017. As malicious or poorly controlled drones are becoming more and more a security threat, the French army explores all options for defence. They train royal eagles for six months at the airbase to chase drones. / AFP / GEORGES GOBET (Photo credit should read GEORGES GOBET/AFP/Getty Images)
Photograph by Georges Gobet—AFP/Getty Images

Faced with the specter of a terrorist threat from rogue drones, the French are recruiting an avian ally. At a base in the southwest of the country, a special army unit has for months been training four golden eagles to spot drones and perform mid-air takedowns.

Details of the program emerged last week when French media outlets reported on an experimental program that involves soldiers raising the eagles from chicks, and training them to associate the drones with food.

As Le Parisien explains, the soldiers began by serving meat to the young eagles on the ground using drones as dinner plates. When the eagles grew a bit older, the trainers then presented them with drones hovering in the air—to predictable results. The eagles swooped in and seized the drones in talons that can exert pressure of 500 pounds per square inch. (This YouTube video shows them in action).

Once the eagles catch their mechanical prey, they fly to earth and cover them with their wings, and are promptly rewarded with a piece of meat.

The birds are natural drone fighters with the ability to spot targets over a mile away, and to reach speeds over 150 mph when diving for prey. The four eagles at the French base, which is located near the town of Mont-de-Marsan, are named after famous musketeers: D’Artagnan, Aramis, Athos, and Porthos.

While the French program is still in an experimental phase, army officials are impressed with the results so far and believe the eagles will soon be able to report for duty. They envision deploying eagles as a defense against light-weight drones in places like sports stadiums, political summits and airports.

The French aren’t the only ones to turn to eagles for drone defense. Their program is modeled one started in 2015 in the Netherlands. Meanwhile, eagles aren’t the only anti-drone option in Europe as the aviation giant Airbus has unveiled technology to track and take them down.

In the U.S., rogue drones likewise pose a problem. While some Americans have resorted to shotguns to down drones over their property, there is no word yet of the U.S. military enlisting eagles. Perhaps the famous 82nd Airborne Division will consider it.