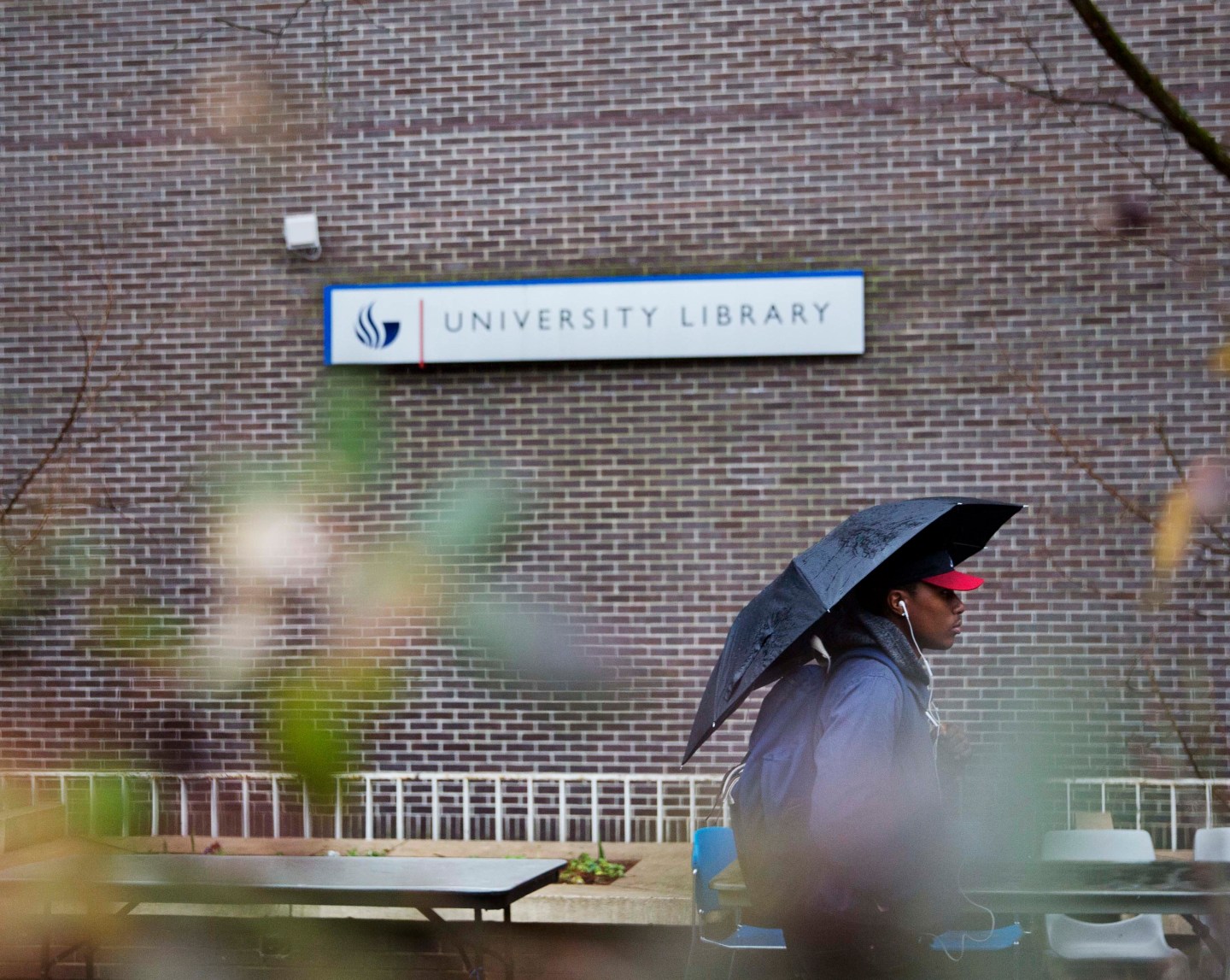 FILE - In this Feb. 22, 2106 file photo, a pedestrian walks by the library at the Georgia State University campus in Atlanta. Getting through college is not an easy task, but it can be even harder for low-income or first generation students who have few support resources. Now big data can help them. Researchers at Georgia State University spent four years analyzing students’ grades, test scores and other data in order to identify those who were at risk of failing and promptly assist them. The results have been remarkable: the number of students graduating has jumped by 30 percent and students are spending less time and money to earn a degree. (AP Photo/David Goldman, File)
David Goldman AP

Getting through college isn’t easy, and it can be even harder for low-income and first generation students with few support resources. A new tool involving big data can help those at risk.

Researchers at Georgia State University spent four years analyzing students’ grades, test scores and other information in order to identify those in potential trouble, and promptly assisted them. The study shows the number of students graduating has jumped by 30% and that students are spending less time and money to earn a degree.

“These are really encouraging gains,” said Timothy Renick, the school’s vice president for enrollment management and student success and the principal investigator in the study. “Because of these proactive interventions all students benefited, but the students who benefited the most were first generation, low-income and students of color.”

Renick presented the study at the American Association for the Advancement of Science conference in Boston on Saturday.

Inspired by Renick’s results, the Education Department awarded a four-year $8.9 million grant that will significantly expand his study. The project, which kicked off last year, will involve 10,000 low-income and first generation students at Georgia State and 10 other large public research universities.

While some students are good at keeping track of their academic progress, students from low-income backgrounds may find it more difficult to spot a problem, chose the right courses from an abundance of offerings and navigate the university bureaucracy. That’s because they may not have relatives or friends who had gone to college and could offer advice.

Gabriella Salinas, a 21-year-old junior at Georgia State majoring in marketing, said she was doing well academically, but then received an F early in her finance class. She successfully completed the course with extra help from her professor.

Success Is Still a ‘Boys’ Club,’ but Here’s What Women Can Do About It

Renick analyzed past student data at Georgia State to make forecasts about current students’ academic outcomes, a type of study known as predictive analytics. For instance, a grade of C in an entry-level class in a student’s major was a sign that student would struggle with more advanced courses. Scoring poorly in a math class meant problems for STEM majors.

When such warning signs were spotted, academic advisers reached out to students to guide and counsel them. As a result, STEM degrees awarded to black students rose by 69%, to black male students by 111% and to Hispanics by 226%. The average time to a bachelor’s degree at Georgia State decreased by more than half a semester, enabling the Class of 2016 to save $15 million in tuitions and fees.

“We are leveling the playing field not by doing academic work for the students … but instead by giving them timely information about what might maximize their chances of graduation,” Renick said. “We have a moral obligation to these students and their families many of whom are taking out large loans to give them every chance to graduate.”

He stressed that it was important to keep the data protected lest it be used for commercial purposes or identity theft.

Some experts have voiced concern that the large amounts of student data collected could be used for profiling. But Ellen Wagner, a researcher who has studied predictive analytics in education, said it would be hard to help the students without first identifying their problems.

“Why would we want to put a metaphorical Band-Aid on a headache?” Wagner said. “If we can remove the guesswork of trying to support students to be the most successful they can be, then we owe them the respect to find where they are strong and where we can help them be stronger and get on with their lives.”

Ryan Baker, associate professor at University of Pennsylvania’s Graduate School of Education, said that similar algorithms have been proved successful in auto insurance and banking.

“Any technology can get misused, but I tend to think that for students at risk, prediction systems are doing more good than harm,” Baker said.