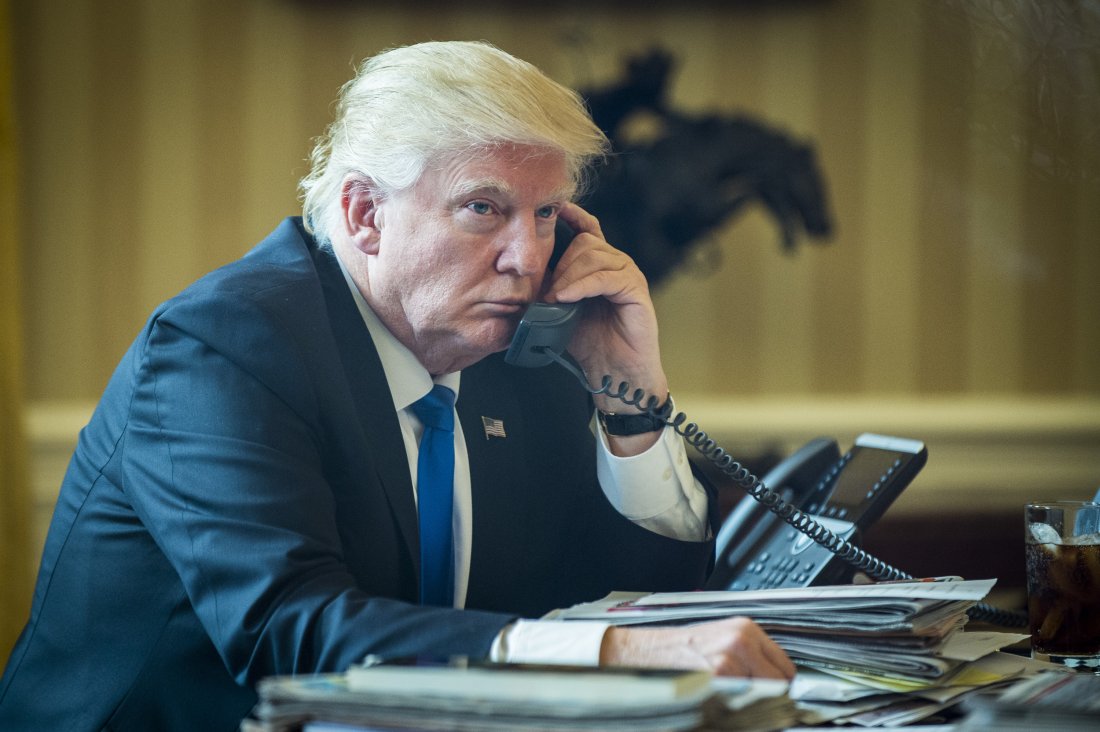 U.S. President Donald Trump speaks on the phone with Vladimir Putin, Russia's president, during the first official phone talks in the Oval Office of the White House in Washington, D.C., U.S., on Saturday, Jan. 28, 2017. Putin and Trump exchanged views on Russia-U.S. relations as Republicans in the U.S. Senate intensify calls to keep sanctions on Russia in place. Photographer: Pete Marovich/Pool via Bloomberg
Photograph by Pete Marovich—Pool via Bloomberg/Getty Images

At first glance it seems so. The ex-National Security Adviser’s departure under a cloud appears to have driven the White House into a situation where it feels the need to stress how tough it will be with the Kremlin—a point White House spokesman Sean Spicer spelled out in his daily briefing yesterday. Spicer dwelt on comments made by Trump’s ambassador to the UN, Nikki Haley, two weeks ago, who said in her first speech in New York that: “Our Crimea-related sanctions remain in place until Russia returns control over the peninsula to Ukraine.”

The point was rammed home by the president himself Wednesday morning, in a tweet that had little in common with his previous warm comments about President Vladimir Putin.

Crimea was TAKEN by Russia during the Obama Administration. Was Obama too soft on Russia?

#Goodluckwiththat and #Outofourcolddeadhands was the answer from Moscow Wednesday, with Foreign Ministry spokeswoman Maria Zakhara saying: “We don’t give our territory back: Crimea is a part of the Russian Federation. That’s all.”

While the row over Flynn’s departure is likely to dominate the domestic news agenda in the near term, it’s how the U.S. treats Russia over Ukraine and Syria that are more important for the world going forward. It was Trump’s openness to the idea of recognizing the Crimea annexation that threw into doubt his commitment, if elected, to defend democracy and international law, a central doctrine of U.S. foreign policy since World War II.

“I’m going to take a look at it,” Trump had told ABC. “The people of Crimea, from what I’ve heard, would rather be with Russia than where they were. And you have to look at that, also.”

But Rex Tillerson, in his confirmation hearing for secretary of state, essentially gave the Ukrainian government a veto over any such move, saying: “The only way that can ever happen is if there were some broader agreements that were satisfactory to Ukrainian people…Absent that, no, we would never recognize that.”

That seems as far away as ever. Fighting has flared up again in eastern Ukraine since the turn of the year. Both sides, as ever, blame each other, but aggressive Russian air force posturing around U.S. warships in the Black Sea has added to suspicions that Moscow is testing the new administration’s resolve. Tillerson will have an interesting first meeting with his counterpart Sergey Lavrov Thursday in Germany, on the sidelines of a broader G20 meeting of foreign ministers.

But could the Ukrainians ultimately be reconciled to Trump’s Grand Bargain? It’s not unthinkable, especially if it buys peace and an end to Russian meddling in eastern Ukraine. An opinion poll carried out on behalf of the Canadian government last year found that only 6% of people thought the Russian presence in Crimea was one of the most important issues for the country (even if a majority still, in principle, want it back). By contrast, the war in Donbas was a top issue for 52% (one wonders what the other 48% were thinking). Corruption and unemployment were also far bigger concerns than Crimea.

Likewise, it’s quite possible that a new, legitimate and internationally-monitored referendum, superseding the one held at the barrel of a gun in 2014, could confirm Crimea’s membership in the Russian Federation. Though the majority Russian-speaking population never actively sought to be part of Russia, they’re even more unlikely to want to cause another furor by reverting to control from Kyiv. But how to persuade Russia to swallow its pride and consider such a thing?

As such, Trump’s bargain isn’t completely dead, but preparing the ground for it—a tall order in the first place—is going to be nigh-on impossible until the current ruckus in Washington has run its course – and until the Kremlin knows that the U.S. is still committed to its traditional policies and principles.