ABC Finally Casts a ‘Bachelorette’ Lead for the Right Reasons 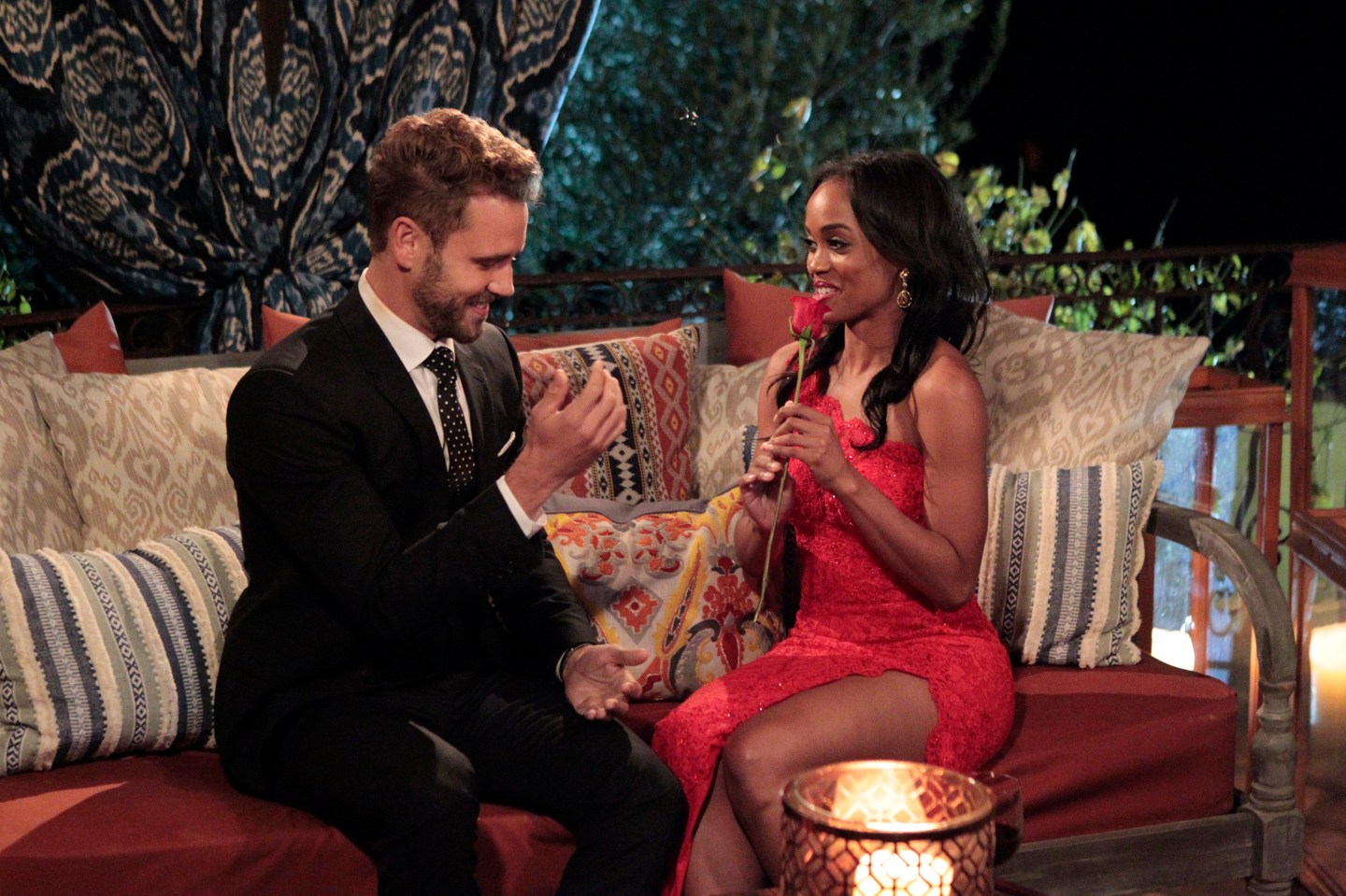 THE BACHELOR - Episode 2101 - What do a dolphin-loving woman, a successful businesswoman who runs her parents multi-million -dollar flooring empire;, a bachelorette, who is hiding a big secret about her past involving Nick, and a no-nonsense Southern belle, who has Nick in her cross-hairs for a big country wedding, all have in common? They all have their sights set on making the Bachelor, Nick Viall, their future husband when the much-anticipated 21th edition of ABC's hit romance reality series, "The Bachelor," premieres, MONDAY, JANUARY 2 (8:00-10:01 p.m., ET), on the ABC Television Network. (Rick Rowell/ABC via Getty Images) NICK VIALL, RACHEL
Photograph by Rick Rowell—ABC via Getty Images

After more than 30—30!—combined seasons of ABC’s powerhouse dating franchise The Bachelor, the show’s producers have woken up and acknowledged it’s 2017.

Ahead of Monday night’s regular two-hour program, the Disney-owned network (DIS) slipped out a spoiler and confirmed through Late Night With Jimmy Kimmel. But it was a spoiler dished for the right reasons: the show finally cast an African American as the lead of its next season of The Bachelorette.

That lead will be Rachel Lindsay, 31, a lawyer currently competing (or in the parlance of the show, “on her journey to find love”) on the current season of The Bachelor, currently focused on Nick Viall.

The choice of Viall was derided by many media critics and fans of the show for a whole host of reasons, including but not limited to publicly shaming the lead as a contestant on his first appearance on The Bachelorette for engaging in a sexual relationship and then not choosing him in the end. Viall then returned to The Bachelorette the following season as well as the spring break-esque spinoff, Bachelor in Paradise—only to “lose” both of those competitions as well. Show producers attempted to spin his latter performance as a comeback or redemption story, thus selling them (and then all of America) as to why he was the perfect choice to be the lead on the current Bachelor season.

But after 33 collective seasons and more than a dozen years of this program, a straight white male was not the perfect choice. It was the same choice, the old choice, however you want to spin it.

The Bachelor franchise has attempted to make strides (or at least hush critics) when it comes to diversity in both ethnic and religious backgrounds (though not sexual orientation) as far as the casting of the show’s contestants. There have even been a few “winners” (meaning those lucky few who survived/received the “final rose”) who were people of color.

Show producers had the chance to alter this course before, most notably at the end of last year’s season of The Bachelor. Anyone who follows the show on a weekly basis, reads the show lead’s blog posts on People.com, follows fans (collectively known as “Bachelor Nation”) on Twitter (TWTR), or reads spoilers from Reality Steve (guilty as charged) knows by now that it is usually one of the final three contestants who is chosen as the subsequent show lead. It’s easy to see why: The lead already has a built-in following with fans nationwide not to mention an easier narrative for producers to construct and fans to follow. It’s a formula that has worked well for ABC, thus why there have been 33 seasons with no signs of stopping.

Caila Quinn was seemingly the obvious choice being the second to last woman to go home during Ben Higgins’s season in 2016. Tabloid and blog buzz surrounded Quinn, who is half-Filipina, on those grounds, but it also built anticipation that she would be announced as the next Bachelorette—and the first non-white Bachelorette.

Sadly, it was not to meant to be, and Bachelor producers chose JoJo Fletcher—the woman Higgins sent home right before proposing to another woman—as the next Bachelorette. Bachelor Nation was livid. It should be noted that Fletcher is half-Iranian, and having a partially Middle Eastern lead could have been publicized more—yet there was barely a peep about it during the show.

Not the case this time. Fast forward to yesterday and ABC went so far as to spoil its own show—Bachelor producers famously hates spoilers—by announcing the next Bachelorette weeks before we even get to the final three. Sure it might look like an early Valentine’s Day treat for show fans, but really its an excellent PR move to start building as much buzz as possible for the next season, which will air this spring. The choice of Rachel Lindsay is as the first black Bachelorette is already The. Most. Dramatic. Moment. In. Bachelor. History.

At least this time the hyperbole is for the right reasons.